Politicking over the Cauvery issue has angered people of Tamil Nadu 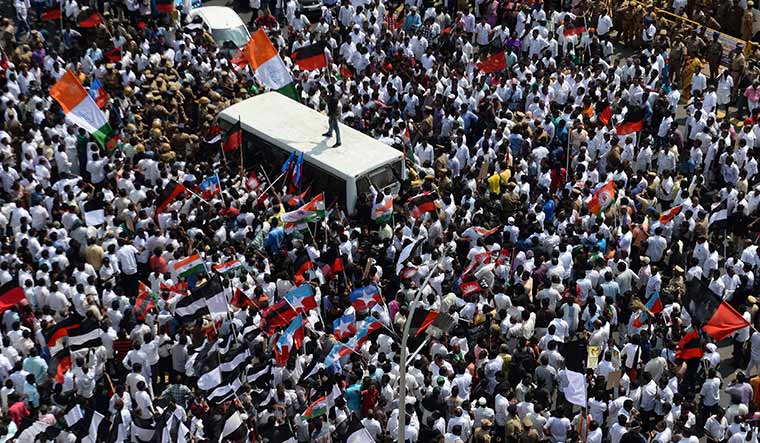 Burning issue: Opposition parties in Chennai protest the Centre’s delay in the setting up the Cauvery Management Board | AFP

On April 10, a hot sunny day, Chennai’s Chepauk stadium became a fortress. Yellow barricades, armed policemen and security vans surrounded the venue. The Indian Premier League was in town, and the Chennai Super Kings were to take on the Kolkata Knight Riders. The protestors outside could not care less. They wanted water, not cricket.

On February 16, the Supreme Court had passed an order reducing Tamil Nadu’s share of Cauvery water by 14.75 tmcft. It also asked the Union government to frame a scheme for the implementation of its order, including the setting up of the Cauvery Management Board within six weeks. The board would be an autonomous body with stakeholders from both states, and would ensure water distribution as per the verdict.

The Centre, however, did not comply, letting the March 29 deadline come and go. Instead, it moved court seeking three more months and asking the court to clarify what “scheme” meant. In its petition, the Centre said that “the CMB may well be taken past the Karnataka assembly elections scheduled on May 12”.

As the ball flew inside the stadium, tempers grew hot outside. The Cauvery waters were curtailed, but the anger was boundless. In fact, the police detained two people for hurling shoes at CSK players during the game. “When there is a threat to Tamils and their rights, we will come together to protest. We had politely requested the governor and the chief minister to ensure that the IPL [matches] in Chennai [be postponed at a time] when the people are in distress because of the Cauvery [issue]. They should have respected our sentiments. But, they did not oblige,” said director P. Bharathiraja. He, along with likeminded people, recently formed a forum for the welfare of Tamil art and literature, which will raise various issues plaguing the state, but without politics.

The current protests began when DMK working president M.K. Stalin called an all-party meeting to discuss the Cauvery issue, just after the verdict. The ruling AIADMK then launched a hunger strike against the Narendra Modi-led Union government. The fast, however, turned into a farce as some party cadres took a lunch break during the sit in. On March 30, the DMK and other opposition parties held a meeting to discuss future action. On April 5, they marched down Chennai’s arterial Anna Salai road en route to the Marina beach. Stalin and some others courted arrests. On April 7, the DMK took out a rally from Tiruchirapalli and the voice of the protestors grew louder. “Cauvery is our right,” said Stalin. “Being a lower riparian state, we are deprived of our rights. The AIADMK government here is spineless and could not even condemn the Centre.” 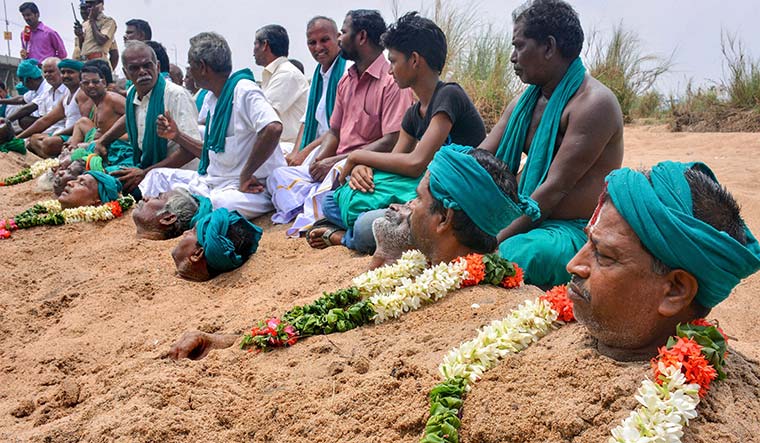 Neck-deep in misery: Farmers in the Cauvery riverbed at Tiruchirapalli protest the delay in setting up the Cauvery Management Board | PTI

On April 9, a three-judge bench led by Chief Justice Dipak Misra, hearing the Centre’s clarification petition, directed the Union government to file the draft scheme by May 3.

“The Centre, other than filing the clarification petition, has done nothing to uphold Tamil Nadu’s water rights,” said K.V. Ilankeeran, president of the Federation of Cauvery Delta Farmers Association. “Now they say the process to get the draft report ready by May 3 has begun. Neither Union Water Resources Minister Nitin Gadkari nor Prime Minister Narendra Modi has said anything on this. The Centre’s actions clearly show its betrayal and the politicians here are its puppets, playing politics over a contentious issue. The blame game continues, but there seems to be no solution.”

Initially, on February 16, AIADMK Rajya Sabha member A. Navaneethakrishnan called the Supreme Court judgment “a setback to Tamil Nadu”. Later in the day, his colleagues said the party was satisfied with the verdict, saying the “Cauvery Management Board is a blessing for Tamil Nadu”. For six weeks, the AIADMK maintained that it would wait for the Centre to set up the board. Meanwhile, it said it would also protest in front of Parliament to exert pressure on the Union government. Navaneethakrishnan, in fact, said “all AIADMK MPs will commit suicide, if the board is not set up”.

But, again, the Modi government did not act. BJP leaders in Tamil Nadu reasoned that the Cauvery was “a very emotive issue in Karnataka” and had led to “serious law and order situations leading to avoidable loss of human lives and property”. Said BJP general secretary H. Raja: “We have witnessed 40 years of betrayal by the Congress and the DMK. Can we not wait for 40 days to get the clarification from the court?”

He said that the member states—Karnataka, Tamil Nadu, Kerala and Puducherry—had not arrived at a consensus in constituting the board and that it was the reason for the delay. However, many say that the BJP is silent because of the upcoming assembly elections in Karnataka. By implementing the Supreme Court’s verdict, the BJP would only antagonise the Kannadiga voter. “The BJP has a policy of divide and rule always,” said T. Velmurugan of Thamizhaga Vazhvurimai Katchi. “Here, too, for its political gain, the BJP has delayed the formation of a board.”

The political protests, meanwhile, have only stressed an already aggrieved state. To gauge the effect of the Cauvery dispute, S. Janakarajan, a retired professor of the Madras Institute of Developmental Studies, undertook a study between 2014 and 2016. It covered four decades, and found that there was a 13-fold increase of wasteland in the delta. In the same period, cultivable land dropped by 25 per cent. “Tamil Nadu’s delta, which was once used for cultivating paddy and other crops, has lost more than 2.75 lakh of 11 lakh hectares in the past five years,” said Ilankeeran.

Unfortunately, this reduction of cultivable land and the loss of several crops have not been discussed by any protesting politician. In fact, more than the verdict and the Centre’s inaction, it is the politicking that has angered the people, especially the farmers. “They are only mocking us,” said farmer Kalyanam Shanmugam, who has sold one fourth of his three acres in the delta. “It is one year since I sold [my land]. I depend on Cauvery’s tributary Arasalar for water, and now it is bone dry. Looking at the situation now, I might have to sell another portion of my land. I cannot afford to pay my debts.”

Over the years, over several judgments, Tamil Nadu’s share of Cauvery waters has gone down from 575.68 tmcft to 177.25 tmcft. “The Centre is clearly betraying us. The drought and the debts have pushed many farmers to quit agriculture,” said P.R. Pandian, president of the Tamil Nadu Farmers Association.

The AIADMK might portray its protests and the BJP’s silence as a political victory for Tamil Nadu. But, the AIADMK protests have only hoodwinked the people. In 1993, former chief minister J. Jayalalithaa fasted for the cause and had bent the Union government to her will. But, 25 years later, the AIADMK has failed to even promise a solution. The best it could say was: “We will fight legally to ensure our rights.”

This had led to a lot of anger against the state and the Centre. Political observers say that the current protest, led by opposition parties, is the biggest since the Jallikattu agitation last year. There have also been other protests. In Thoothukudi, people have been up in arms against the expansion plans of Sterlite, a copper smelter. Then, there is the opposition to the Centre’s neutrino project in Theni. All these are seen an outburst of the opposition parties, as well as the people, against an inefficient, leaderless government.