Necessity is the mother of invention. Regular instances of unlawful content impinging upon individual safety and national security paved the way for the new IT rules. However, by vehemently disregarding them, social media intermediaries are complicating an already tricky situation.

The key debate is with regard to the aspect of tracing the originator of unlawful messages. Companies like WhatsApp contend that it would compromise on a key non-negotiable, i.e. user privacy. This, however, is not true. First, the rules do not dilute the right to privacy of ordinary users, since traceability will be sought only in exceptional cases as a last resort.

Second, it is noteworthy that no social media intermediary has made a case about the robustness of their algorithms in tackling the menace of circulation of unlawful content. The companies, instead of developing a technical solution to comply with the traceability clause, have chosen to fight the government tooth and nail. Do these companies not owe it to their 100 crore-plus Indian users­—the largest in the world—to proactively create a mechanism to assist law enforcement in preventing serious cybercrimes?

Next, WhatsApp’s fierce opposition to traceability reeks of hypocrisy, given that the company recently tweaked its new privacy update to share user data with both the parent company and its business associates. The way WhatsApp has attempted to impose this update upon users is nothing less than coercion. Besides, it is discriminatory when in the EU it gives people a chance to opt out of the update. Given the double standards, WhatsApp naturally loses leverage to negotiate on India’s new rules. 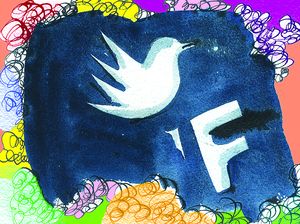 The fourth issue is with their opacity. Whether it is the uncanny disappearance of blue ticks from the accounts of political figures, or content being labelled as manipulated media, or the mechanism of choosing fact checkers, it is about time for Twitter to come out into the open. Exercising opacity is unbecoming of a clique of companies that, by their very purpose, position themselves as facilitators of freedom of speech. And, with limitless freedom of expression, there also comes some responsibility. You cannot create a democratic space when you are denying users the right to effective redress.

That said, do these platforms consider themselves as content hosts or as publishers, given they exercise their editorial prerogative? If it is the latter, should they not be subject to the regulations that govern other media enterprises? It is incumbent upon social media companies to clarify.

India's IT regulations could redefine the rules globally. Countries like Australia, the US and Brazil have been contemplating regulations to address contentious issues like traceability, and now, India must look to set a precedent. Perhaps, Narendra Modi’s commitment to ‘open societies’ at the G7 Summit couldn’t come at a better time.

Fostering a space online that is truly democratic, and serves as an effective tool for freedom of speech, requires both sides to draw a delicate balance. However, digital companies cannot afford to defy the laws of the land. The government's new rules mirror its role as both a facilitator of free speech via social media as well as a protector from its devious misuse. And the government’s stance is clear—there will be no compromise on India’s digital sovereignty.

It’s now up to the social media companies whether they should choose to adapt or resist to no avail.