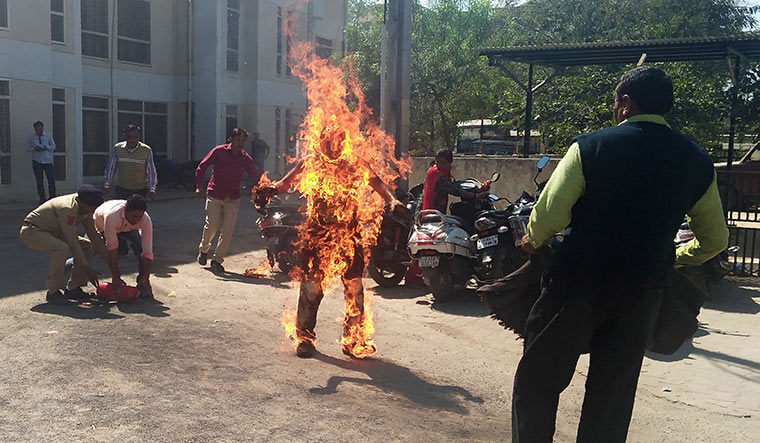 All for a cause: Bhanubhai Vankar immolated himself in his fight for dalits’ land rights | AFP

On February 7, when the district collector of Patan, in North Gujarat, received a letter saying that three persons would immolate themselves if a piece of government land, allotted to dalits, was not regularised, the official might not have taken it seriously.

On February 15, however, dalit activist Bhanubhai Vankar, in his 60s, delivered on his promise—he immolated himself outside the collector’s office. The two others with him, Hemaben Vankar and Ramabhai Chamar (the dalits who wanted the land), were stopped from doing so. Vankar, however, sustained more than 90 per cent burns before the fire brigade arrived.

He died the following night, giving birth to statewide protests by dalits. Hundreds of protesters, including Vadgam MLA Jignesh Mevani, were detained and later released. Vankar’s family refused to accept his remains until the state government accepted its demands. On February 19, under immense pressure, the government accepted the six demands, and Vankar was laid to rest the following day.

One of the family’s major demands was that the government should, within six months, give dalits physical possession of land allotted to them under the state’s Agriculture Lands Ceiling Act. The state has a ceiling on how much land a farmer can own and the excess area is to be redistributed among the disadvantaged. However, in many cases, the allotment is only on paper, and the land is actually being cultivated by others, usually upper castes.

The dalit anger is understandable. Ratibhai Makwana, an eyewitness to Vankar’s self-immolation, blamed the government for Vankar’s death, and asked why no preventive measures were taken to stop him.

Meanwhile, Induben, Vankar’s widow, is still in shock. “I had not spoken to him for the past four or five days,” said the schoolteacher. “His phone was switched off. But, his friends told me that he would not take the extreme step.”

Induben stays in Shankheshwar, where her school is, and Vankar stayed with his brother in Unjha, about 80km away. “I have lost my husband. I only request the state government [to ensure] that no one else meets the same fate.”

She did, however, say that she was happy for Hemaben and Ramabhai. “My husband spent less time with me and devoted more time to the dalits,” she said, adding that both her sons were following in their father’s footsteps.

Hemaben and Ramabhai had been tilling the land in Dudhka village for several years, and, according to reports, had even paid the government about Rs 22,000 for its transfer in 2013. “On February 6, we had met Revenue Minister Kaushik Patel and he claimed he would do the needful,” said Ramabhai. “The file has been gathering dust for years despite Hemaben paying the necessary dues.”

Though they have now been promised the land, the duo knows it has come at a price. “We lost our iron man,” said Ramabhai.

Said dalit rights activist Kirit Rathod: “For the past 22 years, the BJP has been talking about good governance. The marginalised, however, have not benefitted. It is all bogus assurance. The state government does not have the will and strength to allot the land. It accepted the demands after Vankar’s death; could it not have done so much before?”