Out of the box 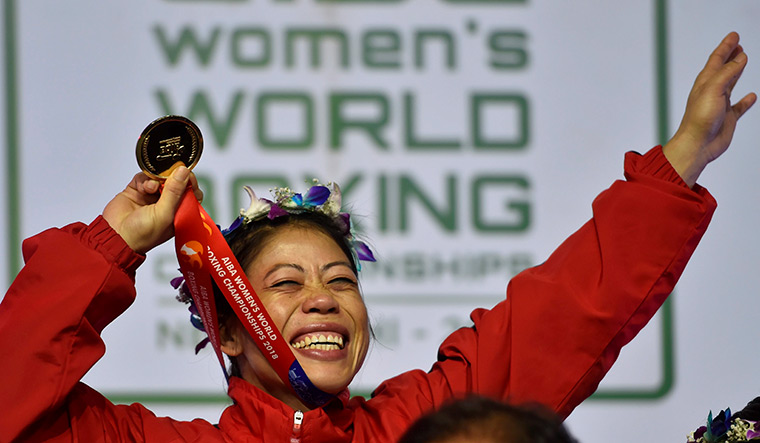 As the referee lifted Mary Kom's tired arm in victory, the K.D. Jadhav Hall in Delhi's Indira Gandhi Indoor Stadium erupted. The mother of three was a world champion for the sixth time. She had outboxed Ukraine's Hanna Okhota, in a unanimous decision, to win the International Boxing Association (AIBA)world title in the light-flyweight category (48kg).

Mary acknowledged the loud cheers, stepped out of the ring and plonked down on the floor for her cool down. She stayed there for a few minutes. “I had promised you that I will try my best to win the sixth title. Now, I have done it,” she said.

The 35-year-old had not slept for two nights; such was the pressure. You could see it on her face every time she took to the ring. “I told her, now you relax as much as you want,” said Raffaele Bergamasco, the Italian coach of the women's team.

Without doubt, Mary has done more for women's boxing in India than anyone else. Indian boxing and even AIBA derive much of their popularity, credibility and integrity from the exploits of the Manipuri pugilist. At a time when boxing is facing the threat of being excluded from the Olympics, over concerns of possible match-fixing, there is no greater ambassador for the sport. Vijender Singh, Olympic bronze medalist and former poster boy of Indian boxing, said, “Being 35 and a mother of three, and still being able to achieve what she did is extremely special. Everybody should learn from her. She proved that age is just a number. No doubt there was pressure on her, the whole country was following her progress.”

In the final bout, Mary relied on tactics. She went on the offensive in the first round itself, making sure that her opponent was left playing catch-up. Pointing at Okhota, Bergamasco said after the bout, “She will be the next Mary. But today, Mary was the best. She is very experienced, very talented, very blessed. The gap between Mary and Okhota was this much (spreading his arms wide). Today, Mary was way ahead, thanks to her brain.”

With her latest win, Mary's legend continues to grow. Not only is she the only woman to win six world titles, she is also the only woman to clinch seven medals in AIBA Women’s World Boxing Championships. Bergamasco even said that Mary was “equal to Maradona in football”. “She is a very shrewd boxer,” he added. Her first five titles came on the trot, between 2002 and 2010. Ireland’s Katie Taylor won six medals between 2006 and 2011.

As the most experienced boxer in the country, and perhaps in the world, Mary is equally effective inside the ring and outside. When 21-year-old compatriot Lovlina Borgohain, who won bronze in the 69kg welterweight category, spoke about the mistakes she made, Mary interjected: “What mistakes? You will learn from experience.”

And it is this experience that has made boxing easier for Mary. “Now, I am smarter and try to find out my opponent's game before thinking about mine,” she said. “Nowadays, it is not that tiring, unlike when I was younger. It is all about experience and one learns from experience. These younger girls will also learn from experience,” she added, referring to the other three medal winners—Lovlina, Sonia Chahal (silver in the 57kg category) and Simranjit Kaur (bronze in 64kg). “Earlier, I was like a bullfighter. I was charging all the time and I would be totally tired and could not even raise my hand after the fight. In boxing, any result is possible, but it will not [be] easy to beat me.”

For a young Mary, sports was not an indulgence but a means for survival. Coming from a humble farming family in Manipur, there was always pressure. “There was pressure on me [to win] before marriage, after marriage, when the kids were born,” she said. “This win was tough because of the pressure and the change of weight (she had to compete in the 51kg category as there is no 48kg category at the Olympics). I won my last world championships gold in 2010, and [had to] change the weight category for the Olympics. I do not know how to put this gold alongside the earlier five.”

Her family's support, especially of husband K. Onkholer Kom, has been key. “I take care of my boxing and he takes care of everything else,” she said. “That is the only way this has been possible. I make sure I train daily. What you see today is a result of that focus and training.”

When women's boxing was added to the Olympics in 2012, Mary focused on winning at the Games. While she won bronze in London 2012, she could not qualify for Rio 2016. It was hard to adapt to the weight change.

“Everybody thinks it will be easy but it is not,” said Vijender, the current World Boxing Organization Asia Pacific Super Middleweight Champion. “The Olympics is difficult for anyone. People do not have any idea how hard it is.”

Now that she has another world title, there is pressure to win at the 2020 Olympics in Tokyo. Mary, however, will take her time to decide her approach. “I will have to go back to 51kg to be able to compete in the Olympics,” she said. “Getting a gold in Tokyo will not be easy, but I will try my best. There are bigger and stronger boxers in the 51kg category, but I am mentally stronger now. If I train regularly, no one can beat me easily.”