SHE WAS BARELY seven when her enthusiastic father arranged vegetables on a table in groups, to help her understand the concept of multiplication. Today, what she brings to the table will impact the world economy.

The appointment of India-born Gita Gopinath as International Monetary Fund’s chief economist has made Indians proud. The 46-year-old’s journey from a middle-class Mysuru girl to a world-class economist is a saga of hard work, focus and grit, breeding intellectual leadership.

Her parents’ residence in Mysuru is teeming with people, as her well-wishers troop into the verandah overlooking the well-manicured lawns. Gita’s father, T.V. Gopinath, gets emotional recalling his daughter’s journey. “It is no small achievement. We are grateful to god,” says Gopinath, who heads Raita Mitra, a farmers’ collective. He is home from his farm in Bilikere village near Mysuru city to handle the stream of visitors.

Gita’s mother, V.C. Vijayalakshmi, who ran a very popular playhouse for 35 years, says, “My daughter is only my baby, although the world sees her as a celebrity today. In spite of her tight schedule, she calls me every evening. What more can I ask for?”

Currently, the John Zwaanstra professor of international studies and economics at Harvard University, Gita was born on December 8, 1971, in Calcutta, during the Bangladesh war. “In 1980, we came to Mysore. Gita was nine, and joined Nirmala Convent in class four. I had quit my job to take care of my ailing mother,” says Gopinath.

While both their parents are from Kerala, Gita and her elder sister, Anita, picked up many languages as the family lived in Calcutta and Hyderabad before settling down in Mysore. “I was apprehensive whether my children, who spoke Hindi and English, would be able to pick up Kannada,” says Gopinath. “Both of them learnt Kannada in three months. Gita speaks Kannada, and all her friends are Kannadigas. She had little knowledge of Malayalam till she accepted the Kerala government assignment,” says Gopinath, referring to her 2016 appointment as Kerala Chief Minister Pinarayi Vijayan’s economic adviser.

Gita, who loved athletics, surprised everyone when she quit sports to focus on studies. “One day, she told me that she did not want to go for practice. ‘Sports is a tricky affair. Unless you are number one in India, you are a nobody! But if you come first or second in university, you could be somebody big’, was her reasoning,” recounts Gopinath.

“The girl who used to score 45 per cent till class seven, started scoring 90 per cent. I never asked my kids to study, and had not put any restrictions on them. Their friends came home, stayed over to study and play. Till SSLC, both my girls used to go to bed by 7.30pm and wake up early. After school, Gita joined Mahajana PU college in Mysuru, and pursued science. Later, though her marks were good enough for engineering and medicine, she decided to do BA (Hons) in economics,” says Gopinath. He remembers Gita having a short stint learning the guitar, and participating in a fashion show, but she gave it all up to focus on studies.

Gita chose economics to pursue a career in the civil services. “Anita was studying engineering at Sri Jayachamarajendra College of Engineering, Mysore. Like every middle-class parent, I thought Gita should study medicine. Later, we decided against it. I wanted Gita to appear for the civil services exam. At the same time, I came across an article on the best colleges in India. Lady Shri Ram College for Women (LSR), Delhi, had been ranked as the best for economics. I immediately told Gita to apply. She qualified, even after downgrading the science marks by 10 per cent. Once in Delhi, she would call me to say her transition from science to economics was tough, and that all her classmates had studied economics from leading colleges in the metros. Yet, she topped all three years. When she came home briefly after the second year, she had brought huge bundles of study material for competitive exams. She told me that she wanted to do an MBA as it fetched good money! Next day, she got up at 5am, and I, too, joined her to open the bundles. I told her that she had all the time to prepare for MBA, but had little time to complete her BA with distinction. She immediately called a classmate in Bengaluru and gave away the bundle. She topped Delhi University and created quite a flutter by bagging the gold medal as LSR had beaten St Stephen’s for the first time, and by just two marks,” says Gopinath. 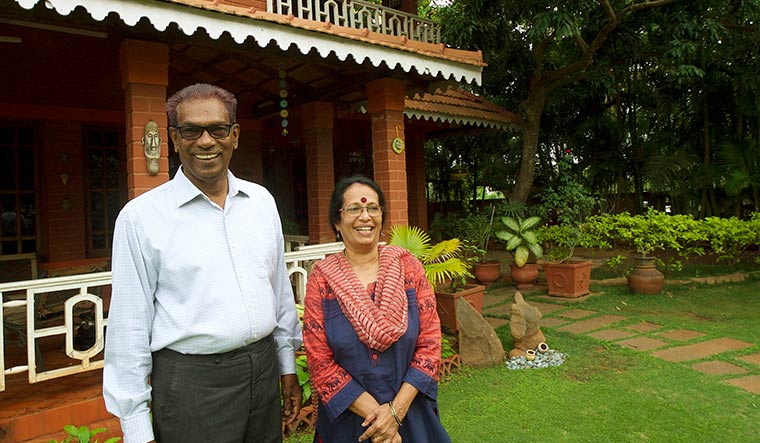 She bagged five gold medals. “While presenting the medals, vice president K.R. Narayanan looked at me in the front row and asked whether Gita was the same girl who had won a medal earlier. I said it was the same girl and that she would come back for more,” he says.

After BA, Gita gave up her IAS dreams as it had “little money”. She joined Delhi School of Economics. It was here that Gita met her future husband Iqbal Singh Dhaliwal. “Iqbal and Gita travelled by the same bus to college and he chased her up to Princeton,” laughs Gopinath. Iqbal topped the civil services examinations in 1996. An IAS officer of the Tamil Nadu cadre, he served for five years before quitting his job, and moving to the US. The couple has a 15-year-old son, Rohil.

“Iqbal was a bright and intelligent boy. Gita’s friends told her that she could not get a better man. They got engaged in 1997, and got married in 1999. Iqbal is Gita’s greatest strength. He works with Massachusetts Institute of Technology as the executive director of the Poverty Action Lab. It is only with him that Gita discusses her work at home,” says Gopinath.

In 2001, Gita joined the University of Washington, Seattle, for a five-year PhD programme as it was fully funded. “I could not have afforded it. All I paid was for her one-way airfare—Rs 50,000,” says Gopinath, who himself has strived hard to succeed.

Gita inherits that spirit to fight the odds. A few months into her PhD, her professor felt that she deserved to study in a top school. He gave Gita letters of recommendation to three schools, including Harvard and Princeton, and said she was one of the best students the university had in 20 years. He also wrote to the university senate to confer her an MA, although she fell short of its requirements by six months.

Gita’s mentors wanted her to stay back in the US after she completed her PhD from Princeton University in 2001. When Gita insisted that she wanted to go back because her husband was in India, they offered him a scholarship in public affairs at Princeton. He quit his job and moved to the US, but his resignation was accepted only seven years later.

Gita, who was guided by eminent economists like Kenneth Rogoff and former Federal Reserve chairman Ben Bernanke at Princeton, joined the University of Chicago in 2001 as an assistant professor. She moved to Harvard and became a tenured professor in 2010. She is a visiting scholar at the Federal Reserve Bank of Boston and an advisory member at the Federal Reserve Bank of New York. She also has assignments with the National Bureau of Economic Research. “The new appointment [at IMF] demands that she relinquish all other assignments and move from Boston to Washington. We are all excited,” says Gopinath.

For the last 14 years, the families have been meeting twice a year. “Gita comes down to India with her family every year and we, too, make it a point to visit them every year. Anita lives in Delhi, and is a successful professional working with a garment export company. There is great bonding among the siblings. I had decided that I would go to the US only in 2021 for Rohil’s graduation. But now, I am keen to see Gita’s new office in Washington,” says the proud father. 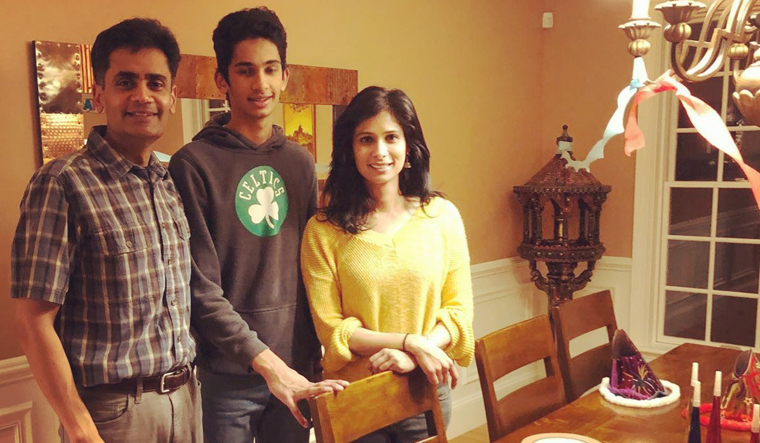 At times, Gita tries to coax her parents to relocate to the US, but Gopinath always has a clever response. “Can you find me a job there?” he asks her.

Gita can inspire many young Indians, feels Gopinath. “She stays connected with our relatives and friends in India. She still prefers simple food.” That explains why her Brazilian chef prepares chapati, rice and curry at home. She loves fish.

Gita lives with her family in a mansion in Boston, and she owns a lake house. She rubs shoulders with the who’s who of the world, her appointments are fixed six months in advance, her articles on world economics and her advice to governments are well appreciated. But it is her hard work and focus that define her. “I have seen her prepare for her lectures and mail them to her students in advance so that they can be ready with questions the next day. Even on the day she got the call from the IMF, she worked all night,” says Gopinath.

On September 14, Gita’s parents went to meet her in Bengaluru as she had been busy travelling to Delhi, Mumbai and Kerala. She was in India for her lectures and to present a paper to the Reserve Bank of India on demonetisation.

“Around 7.30pm, she got a call from the managing director of the IMF to tell her that she had been selected to be the next chief economist and adviser. Gita was excited. She told us and asked not to tell anyone till it was officially announced,” says Gopinath.

“I am grateful to god for Gita has the best life partner,” says Vijayalakshmi. “My son-in-law has ensured that Gita gets back from work to a loving family each day. It is not easy for a woman to succeed without the support of her husband.”