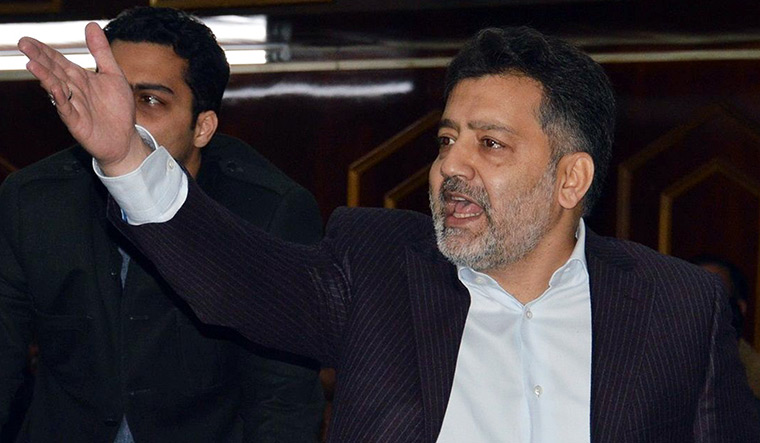 A rebellion is brewing within the Mehbooba Mufti-led Peoples Democratic Party (PDP). After the collapse of the PDP-BJP government in Jammu and Kashmir, some 15 party leaders could be quitting the party. Reports say that the Sajjad Lone-led People’s Conference could emerge as a third force in the valley. Leading the rebellion in PDP is former minister Imran Raza Ansari, who accused party president Mehbooba Mufti of nepotism. He said that Mehbooba “was encircled by sycophants and they drowned her”.

I would like to clear the air. It is not that the government fell and we started saying this. It has been on for a long time. For almost two years we have been begging, virtually begging, Mehbooba Mufti to change her style of functioning. But, she never paid heed. I resigned [from the government] and told her what is happening. She gave assurances and I joined the government again. The government fell abruptly because no one was scared of anyone. When somebody is on the chair, there is a kind of [respect]. In a state like ours, which is always in trouble, the chief minister is virtually next to God, [with] the amount of power which has been given to her.

You say you begged Mehbooba to change her style of governance. Can you give some examples of what you asked her to change?

I told Mehboobaji that our party is being managed by the ones who were rejected [by the people] and by backdoor entrants. I did not hesitate to name them. And, lately, what had happened is that the PDP had become a party which was promoting just the family. We were shocked when she wanted to make her brother [Tassaduq Mufti] a member of the state legislative council. I was the first man to say it cannot happen. Because, he is just [a nobody] in politics. One of our senior legislators also had the same concern. But, she made [Tassaduq] a minister. There were so many people who had worked for the party, who had got 30,000 to 40,000 votes. They were not considered. I always told her that you are surrounded by sycophants. And, these sycophants are going to drown you, and so they did.

You have called the PDP a party of uncles and aunts. What did you mean?

Well, the whole world knows that the chief minister’s uncle [Sartaj Madni] is the vice president of the party, her brother got the best position in the [tourism] ministry, [and] other relatives are placed in different positions. It is the talk of the town.

But, do you also blame the alliance partner—the BJP—for allowing this kind of nepotism to happen?

Well, this had to do with our party. We never intervened in the matters of another party. We have been telling her that she is deviating 180 degrees from the position her father had. When Mufti sahib [Mufti Mohammad Sayeed] was alive, he never allowed these guys to come near the power centre. But, after his demise, it was like a loot.

Was the problem specifically with the brother and the uncle, or was it also with her team of advisers?

How many people in the PDP are with you?

I do not know how many people will stay in PDP any longer.

Do you have an estimate?

No need of estimates. Time will tell you. There is a tsunami coming in. And it is not just the PDP. I think there will be lot of churning, and people from different parties will be leaving in the near future.

In this churning or realignment are you hoping for a third political force beyond the Muftis and the Abdullahs [of Jammu and Kashmir National Conference]?

Why do you call it the third force? Perhaps, it could be the first force. Third has always been a derogatory term. We will have something of the people, by the people, for the people. We want people who do not deceive Kashmiris. These two families have been politically blackmailing Delhi and emotionally blackmailing Kashmiris. We want to tell them what is right and what is wrong. We won’t promise the stars to them. We will only promise what we can do.

Will you join an existing party like Sajjad Gani Lone’s People’s Conference, or will you form a new party?

So, you are saying elections are not meant for resolving the Kashmir issue. You will not lie to the people about that.

Not at all. The lying for 40 years has cost hundreds and thousands of lives. Lots of people have been killed. Lots of soldiers have been killed. Enough is enough. It does not matter if we lose. But, we want to tell Kashmiris the truth. [We might lose after a term, so what?] But, we will go with the satisfaction that we told them the truth.

There is a perception that Mehbooba should have left the alliance earlier, and that the alliance with the BJP has tainted her politically. What do you think?

It is not [about] working with the BJP. Mehbooba Mufti fell in her own trap. She wanted to run the state with the BJP, and she also wanted to demonise the BJP. This cannot happen. One has to be very clear.

Whom would you want to work with? Which national party?

I want to work with my own people. We want to have a new face. We will have a collection of individuals who believe that ‘Enough is enough; no more deceiving the people of Jammu and Kashmir’.

Do you think there should be a fresh election?

So, you will not try and cobble together a new government in this assembly itself?

See, I am expressing my own view. But, if somebody can manage the numbers, then they can do it.

And, you are saying that a churning will involve people leaving from all parties. But, does that mean there will be a PDP left, or will there be no PDP anymore?

That [depends on] what is going to happen. As of now, the thought which we have put forward with the people is getting a lot of appreciation. Many people have conveyed to us that this will be the best position. In ten days time you will definitely see a clear picture.