Twist in the isle

Mahinda Rajapaksa has the edge in the Sri Lankan power struggle 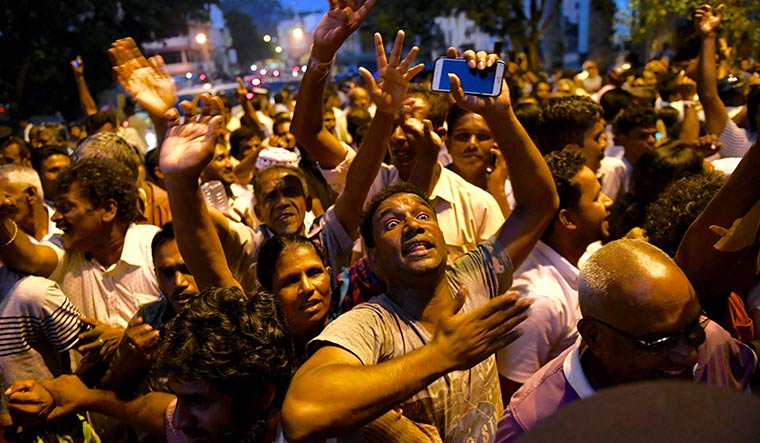 ON NOVEMBER 14, when the Sri Lankan parliament reconvened after the Supreme Court nullified the president’s dissolution order, newly sworn-in Prime Minister Mahinda Rajapaksa walked in with an uneasy smile. It turned out to be a day of high drama in the 225-member house. Slogans supporting and opposing Rajapaksa were raised repeatedly. Foreign diplomats and journalists could be seen waiting for the proceedings to begin.

The session began with the introduction of a motion to suspend the standing orders to dissolve the parliament. Apart from ousted prime minister Ranil Wickremesinghe’s United National Party, opposition groups such as the Janatha Vimukthi Peramuna, Tamil National Alliance (TNA), Sri Lanka Muslim Congress, All Ceylon Makkal Congress and the Tamil Progressive Alliance voted in favour of the motion, which was moved by TNA MP M.A. Sumanthiran. Some MPs from the Sri Lanka Freedom Party (SLFP), too, joined them. As it became clear that the motion to suspend the standing orders was approved, Rajapaksa walked out quietly. Later, 122 MPs signed the no-confidence motion against him. Speaker Karu Jayasuriya confirmed that the motion was passed. “Copies of the motion and the signatures are being sent to the president for necessary action,” he said. Wickremesinghe thus managed to retain the support of the same number of MPs who voted for him during a no-confidence motion in April.

“It is a victory for democracy. Rajapaksa must step down as he does not have majority support in the parliament,” UNP deputy leader and MP Sajith Premadasa told THE WEEK. He said the president should name the prime minister from the majority party. Wickremesinghe, too, expressed confidence about the UNP’s return to power. “We will ensure that the government which was in place before October 26 continues,” said Wickremesinghe in a statement. He asked government servants and the police not to carry out orders from the “purported government that has failed to demonstrate the confidence of the people”. 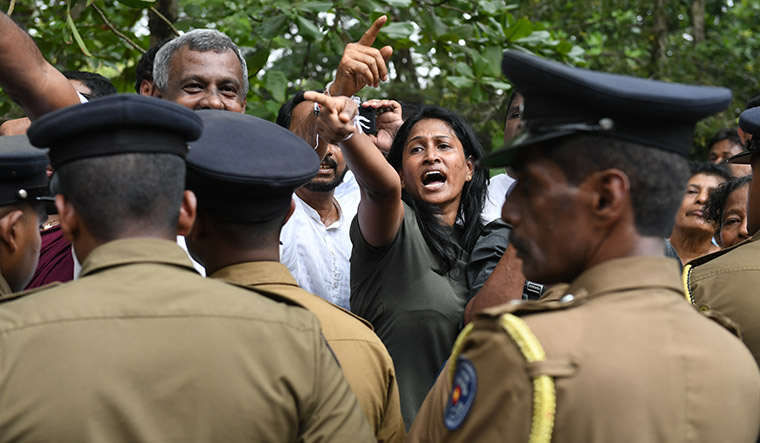 Divided we stand: Supporters of Ranil Wickremesinghe and Mahinda Rajapaksa shout slogans against each other near the Sri Lankan parliament building on November 14.

While Rajapaksa lost the vote of confidence, his Sri Lanka Podujana Peramuna (SLPP) is confident that he will make a comeback. On November 11, Rajapaksa ended his 50-year-long association with the SLFP and joined the SLPP, which was floated by his supporters last year. “We have faith. The Supreme Court will be fair and this government will move forward with Mahinda Rajapaksa as prime minister,” said S.B. Dissanayake, an SLFP MP, and a staunch Rajapaksa supporter.

The UNP, meanwhile, is hopeful of Wickremesinghe making a comeback or nominating someone in his place to take over as prime minister. According to sources, Premadasa could be a likely replacement as he is popular among party cadres. Wickremesinghe, too, might agree to let Premadasa replace him. “It is for the president to decide. The chaos and crisis began with him,” said Selvam Adaikalanathan, a senior MP from the TNA.

The recent political turmoil began on October 26, after Rajapaksa got a call from President Maithripala Sirisena. The president wanted Rajapaksa, his former boss, to replace Wickremesinghe as prime minister. Rajapaksa was sworn in a few hours later. Wickremesinghe, however, refused to oblige, forcing Rajapaksa to set up office on Colombo’s Flower Road, and leaving Sri Lanka with two prime ministers. Wickremesinghe continued to function from the official Temple Trees residence. 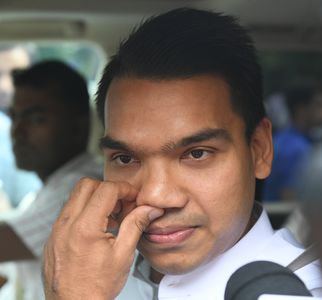 After realising that Wickremesinghe still had majority support, Sirisena issued an order to prorogue the parliament till November 16, giving Rajapaksa time to win over MPs. As it failed to work, Sirisena dissolved the parliament on November 9, and announced fresh elections to be held on January 5. That gamble, however, backfired as the Supreme Court vetoed the decision and Rajapaksa was subsequently ousted by the parliament.

“The Supreme Court’s order is a great victory for all those forces in Sri Lanka and anywhere else in the world who believe in constitution and free and fair functioning of a democracy,” said Paikiasothy Saravanamuttu, founder and executive director of the Colombo-based NGO Centre for Policy Alternatives. “The president cannot dissolve the parliament till the court’s final orders. He can prorogue the parliament, but cannot dissolve it,” he said.

Although the court’s interim order was a shot in the arm for the UNP, Rajapaksa’s return seems imminent as Sirisena wants him back. Feeling threatened by Wickremesinghe, who often took major decisions without consulting him, Sirisena went back to his former leader. According to highly placed sources in the parliament, it was Sirisena who mooted the idea of bringing Rajapaksa back. Although Sirisena and Rajapaksa have been in talks over the past few months, the sudden invitation to be sworn in as prime minister shocked even members of the Rajapaksa camp.

“They had at least four meetings since February, after Rajapaksa won the civic polls,” said a senior MP. “The talks picked up pace after Rajapaksa’s brother Basil got involved. It took proper shape after Rajapaksa visited India,” he said. Other sources confirmed that it was Basil who took the lead in taking the talks forward. Rajapaksa’s son Namal was another key player. Most of the meetings were held at his office-cum-residence in Colombo’s Toronto Avenue. 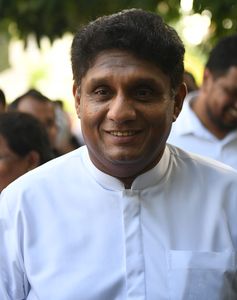 UNP deputy leader and MP Sajith Premadasa, who is among the contenders for the prime minister’s post.

What worked further against Wickremesinghe was the perception that he was close to India. A few weeks before he dismissed Wickremesinghe, Sirisena had allegedly said the Research and Analysis Wing was involved in a plot to assassinate him. Sirisena later denied having made the charge, and even called up Prime Minister Narendra Modi and spoke about the friendly ties between the two countries. “All these happened only because he felt threatened by Wickremesinghe’s decisions,” said Adaikalanathan. Sirisena was also worried about the failing economy and the bank bond scam, which he felt was spoiling his image. It made him explore the possibility of joining hands with Rajapaksa once again.

The Supreme Court’s intervention has come as a major challenge for Rajapaksa and Sirisena. “The interim stay has upset everything,” said a senior SLPP leader. The Rajapaksa camp, however, is confident of a comeback as the court has issued only an interim stay. The final orders are awaited in December.

Sri Lanka, meanwhile, is facing a constitutional vacuum as it does not have a prime minister. It is up to Sirisena to name a new prime minister and restore confidence among the people of the island nation. His actions in the next few days will determine whether Sri Lanka will return to normalcy or descend into further political chaos.