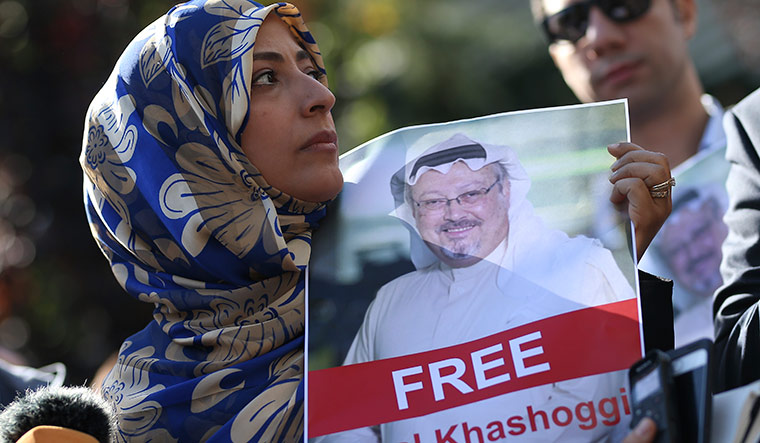 The price of freedom: Nobel Peace Prize winner Tawakkol Karman outside the Saudi consulate in Istanbul, in support of Jamal Khashoggi | AP 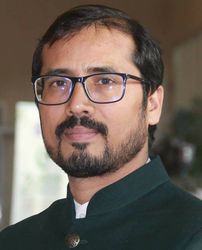 SAUDI ARABIAN JOURNALIST Jamal Khashoggi’s dramatic disappearance in Istanbul has everything to do with his criticism of his country’s politics, which he continued as a free writer, not as a dissident. That he entered the Saudi Arabian consulate on October 2, in order to get some documents attested for his wedding with his Turkish fiancee, and was not seen coming out, is an undeniable fact. Despite claims by Saudi authorities that Khashoggi had left the consulate, they failed to provide any evidence of him exiting the consulate. One of the major fallouts of Khashoggi’s disappearance is that it could put Saudi Arabia-Turkey relations—which are already strained because of the misgivings over Turkey’s support to Qatar against the Saudi-led boycott—under further pressure.

I have been following Khashoggi’s work and I have met him twice in Istanbul. His journalism was the best example of the balance between self-imposed censorship and permitted critical space. His journalism was made for a conservative Islamic monarchy where political sensitivity and religious and social taboos often define the public sphere. He was targeted for being critical of the religious salafi establishment, not as a French liberal, but as a moderate Muslim reformist who thought another interpretation was possible.

Khashoggi was trusted by the people in the royal court, and has served as media adviser to the powerful prince Turki bin Faisal, former head of Saudi Arabia’s general intelligence directorate and former ambassador to the US. Twice he was appointed editor of Saudi Arabia’s sole liberal newspaper, Al Watan. But, he was dismissed arbitrarily for clearing the publication of several articles critical of clerics.

Khashoggi, however, never angered the royal court, where he was close to several powerful members, including Turki and Al-Waleed bin Talal. (Talal wanted Khashoggi to run his Manama-based Al-Arab news channel; the channel was shut down within a few hours of its launch in February 2015.) In his response to whether the Arab uprisings threatened the Gulf monarchies, Khashoggi said the monarchies never promised democracy, and so people never felt betrayed. He was optimistic about Saudi Arabia’s gradual transition in which the young and foreign-educated generation was given important roles in the kingdom.

This background is enough to tell that Khashoggi would never have accepted the tag of “Saudi dissident” or a “Saudi opposition figure” with which many Islamist enthusiasts and Saudi critics in Qatar, Turkey or in the West have hurriedly labelled him after his disappearance.

But Khashoggi’s recent drift was different from the previous tiffs with the Saudi royals. He was in the crosshairs of a tortuous power transition that will make Crown Prince Mohammed bin Salman (MbS) the longest serving king of Saudi Arabia, possibly till 2070, if he lives the average age of his predecessors. MbS is seen as very ambitious, with a different vision for the kingdom. The royal court has traditionally been following either salafi Islamism or moderate Islamism. MbS has rather chosen a third option—Saudi nationalism.

After King Salman assumed power in 2015, Iran has made significant inroads into Lebanon, Syria and Yemen, which have been traditionally under the Saudi sphere of influence. To stop the Houthis’ march in Yemen or to be a counterweight to Bashar al-Assad in Syria, Saudi Arabia needs the Muslim Brotherhood. The Egyptian military’s failure to meet with Saudi expectations and become its regional lackey has frustrated the Saudis. Khashoggi’s semi-official criticism of the Egyptian military establishment was not just a coincidence. Although the Saudi foreign ministry distanced itself from Khashoggi’s statements, the Egyptians, who were aware of Khashoggi’s prominence, were not convinced.

At the Arab Islamic American Summit held in Riyadh in May 2017, which was also attended by President Donald Trump, MbS was seen as the key architect of Saudi Arabia’s new foreign policy template. A few days later, on June 5, an air and sea blockade was imposed on Qatar. On June 21, MbS was formally elevated as crown prince, replacing the powerful Mohammad bin Nayef.

Since then, MbS has been left with few friends and many rivals within the royal family. The rules of shared power were broken, prominent princes were detained, and stopped from travelling abroad. The isolated and disappointed Khashoggi left the kingdom. Since then, he has been living in exile in the US, criticising MbS and his policies, including the war in Yemen and the overambitious development plan, Vision 2030. Many of his articles have been translated into Arabic, and have majorly influenced Arab public opinion. Moreover, the presence of a Saudi critic in Washington was spoiling the kingdom’s PR machinery work.

Khashoggi’s disappearance will serve a purpose for Saudi Arabia, but it could blow up relations with Turkey, its Sunni counterweight against Iran. Turkish President Recep Tayyip Erdogan is under heavy pressure to tell the world about what has happened to Khashoggi. His priority will be to minimise the damage it can inflict on the already strained relations. Nobody in Ankara seems to have a clear picture until the Saudis supply some convincing information. King Salman himself may approach Erdogan if the worst fears come true.