From 'sanskari' jeans to 'no bouncing' brassieres 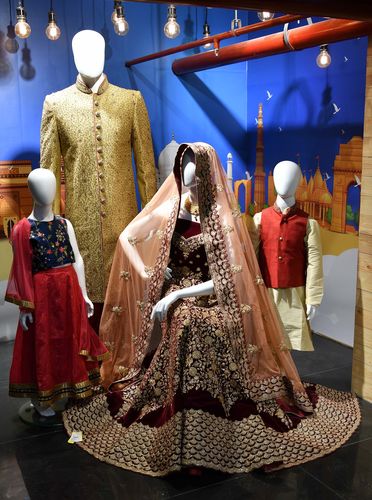 At Patanjali Paridhan, Baba Ramdev's newly-opened apparel store in Delhi, you cannot try brassieres in trial rooms. “Madam, I have been strictly told not to allow bra fitting in the dressing room,” says the lady manning the trial rooms. Dressed in the blue uniform and fitted cap of a security guard, she shoots me a withering look and perhaps indicates that I return my bunch of brassieres to its designated aisle. All categories are available—three-section, “beginners”, sports, padded T-shirt.... Do not expect sheer, fishnet or fine lace, though; every item is 100 per cent cotton. The garment tags advertise their many qualities—anti-microbial, no body odour, no see through, go freely for sports activity, no bouncing and stay fresh. The man at the billing counter confirms that you cannot try them, citing “hygiene issues”, and adds: “But women anyway know their size, right?”

When Baba Ramdev, yoga superstar and ace entrepreneur, launched his first shuddh desi apparel store in Delhi on November 5, the talk turned to sanskari jeans. To what extent are they allowed to be torn, ripped, distressed and damaged? It was only two years ago that he had declared, “Just because I am a baba does not mean we cannot marry modernity with spirituality. We can make, let us say, desi jeans.” At Patanjali Paridhan, he has stocked fhati hui (ripped) jeans, yes, but the degree of laceration on the garment can only exist within the boundaries of bhartiya sabhyata (Indian culture). It was to find this curious breed of desi jeans that I landed at Baba's brand new fashion store. To my dismay, they were sold out. But there were plenty of desi jeans in tone and tenor. For even though the store is abundantly stocked with clothes and accessories to ape the brilliantly-lit interiors of Pantaloons, Westside, H&M and Marks & Spencer, Patanjali Pradhan is heart-on-sleeve swadeshi. 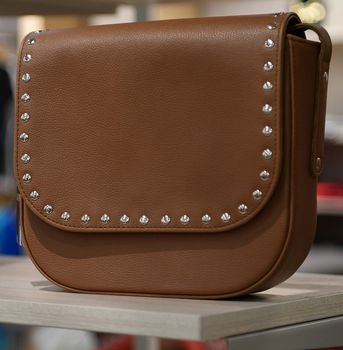 At the entrance, you will find mannequins of an ideal Indian family dressed in gaudy, festive clothing—a veiled mother in a blood red lehenga with gold embroidery, seated on a throne with her two children on either side, and the father standing tall in a sherwani against a backdrop of monuments. Maybe they will change to woollens and mittens next month. Another depressed sherwani-clad mannequin is leaning against a wall with his back turned to the Diwali shoppers, almost looking like he is banging his head on the wall, which is adorned with pictures of Acharya Balkrishna and Baba Ramdev who founded Patanjali Ayurved in 2006. Apparently, 100 more Patanjali Paridhan outlets will open by the end of the fiscal year.

Right next to the men's briefs and boxers section are bare-bodied mannequins clad in the traditional Indian loincloth or langot. Will this desi jockstrap, worn by wrestlers at akharas, or traditional martial arts training centres, cut ice with modern-day fitness freaks? Apparently so. The display piece was the only one remaining, the bemused staffer told me. Perhaps he was not convinced that I was looking to purchase it for a brother. A middle-aged businessman checking out a row of suits and blazers, priced between Rs4,500 and Rs6,000, was mighty impressed with the collection. Everything in his house—from ghee to dishwash—is Patanjali, he says. He is eyeing a faded pink suit. “Just look at the fabric, so soft,” he points out. “It is better and cheaper than Raymond.” 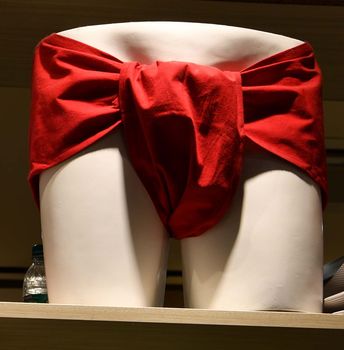 Perhaps the best way to understand the syncretic essence of Patanjali fashion is by reading the pithy notes on the clothing labels. The one-stop shop has clothes for men, women and children in three brands—LiveFit (sportswear), Aastha (women) and Sanskar (men)—apart from accessories, jewellery and footwear, most of them priced between Rs500 and Rs3,000. LiveFit, the label says, is crafted from premium bamboo fiber which is “super airy and comfy” and has the “special quality of reflecting most of the harmful UV rays”. It is also eco-friendly and bio-degradable, and that is why “it is just the perfect choice for every nature lover”. Aastha casual wear is just right “for those who like to play it cool”. Their range of formal footwear is “designed to create the right impression in and out of the boar room” (the 'd' was definitely missing).

A disgruntled shopper wants to put things in perspective. He is seen stomping around the shop, plucking and rejecting items from piles of clothes. “Yaar, I am very pissed,” he says, holding up a pair of cotton trousers. “Look at this. Why will I pay Rs1,000 for this? What is this joke?”