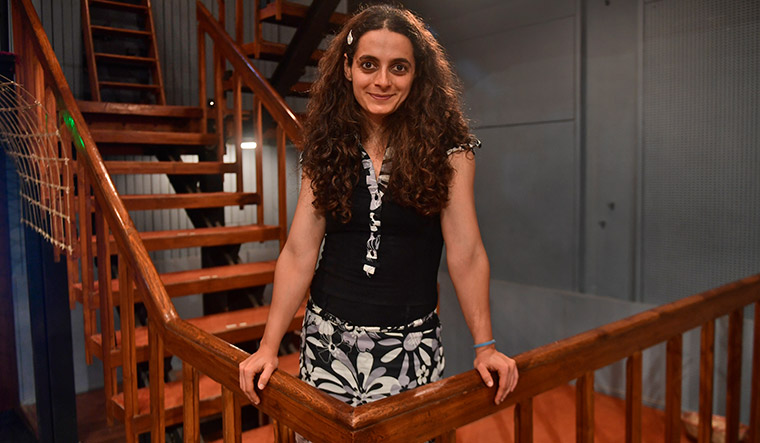 Playing it right: Faezeh Jalali, whose plays have been receiving rave reviews across the country | Amey Mansabdar

IT IS A WARM, fuzzy afternoon in Mumbai when we meet playwright and director Faezeh Jalali. Costume sets from the play, Shikhandi, fluttered in the wind from the parapet of the Experimental Theatre, NCPA, probably hung out to dry after a quick wash for that night’s performance—an evident sign of it being an experimental play, produced on a tight budget. The theatre was houseful the previous two nights and there was a lot of applause and laughter in the auditorium. The night I watched, an old couple discussed how the title misled them into believing that the play was a serious affair, but were surprised by the humour.

Shikhandi: The Story of the In-Betweens is inspired by one of the earliest transgender characters from Hindu mythology—Shikhandi—a transwoman raised as a man. She was instrumental in the victory of the Pandavas in the battle of Kurukshetra in the Mahabharat. Jalali, while covering the journey of Shikhandi, trains the focus on important questions plaguing the society, like patriarchy and societal pressures, but most pertinently, gender identity. The play, an NCPA and Fats Arts Theatre production, first premiered in Mumbai in March 2017. It was back in Mumbai recently after successful shows in Delhi, Bengaluru, Kolkata and Goa; while also bagging nominations in various categories in the Mahindra Excellence in Theatre Awards (META) and winning the best actor in a lead role (female).

Jalali, though happy about bringing social issues into focus, had wanted to cast an actor from the transgender community to make a stronger statement. But, after auditions, she realised that though there was no dearth of great performers and dancers, money was a problem. “The idea was that if there was a transperson who can perform, the opportunity had to be made available to them,” says Jalali. “But, commuting expenses alone came to around 0400 a day and I would have had to do it for the whole cast, not just for one person. That, I could not have done because of a restricted budget”.

Theatre, she says, is a good check on human wishes that never seem to end. “No matter how great I want to be and how much good I want to do, the bottom-line is that for transpeople to get work, they have to be given opportunity across spaces to make it easier for them.”

Of all the problems in putting together a play, the biggest, she says, is the finances. While doing 07/07/07, a play about the Iranian woman Reyhaneh Jabbari who was put behind bars for stabbing a man who tried to rape her, the producer pulled out midway. “We had to crowd-fund it,” she says. But, Jalali is optimistic. “I think there is always a way out.” The play got her the META award for directing the best ensemble play in 2016.

The other hitch, at times, is to get the time and long-term commitment from actors. “Especially when I work in very long processes,” says Jalali. “I don’t do a 10-day or a month-long rehearsal. For Shikhandi, it was almost eight months—six months of training, and it took three months to put the play together. The same process was followed with 07/07/07.”

There is no background of theatre in Jalali’s family—her four sisters have a science background, and her brother is in finance. At one point, since she was good in physics, she wanted to be a physicist; at another, a dentist. But, she never wanted to give up theatre. She was introduced to theatre while studying at the JB Petit High School for Girls in Mumbai. “[Actor] Pearl Padamsee used to direct our school plays and we would have proper festival of plays,” says Jalali. Because of this exposure early on, she picked up interest in theatre and feminism. The school principal then, Shirin Darasha, known for her zeal for drama and arts, was a feminist. Darasha had a strong influence on Jalali. Thankfully, her parents were supportive when she wanted to go to an arts college. She graduated in theatre from Beloit College, US, and did her masters in fine arts from the University of Tennessee.

A fourth generation Iranian living in India, she realised on a teacher’s suggestion that she could draw inspiration from both the cultures. She took up bharatnatyam classes; and, while on a visit to Iran, she realised how well politics is built into the scripts of Iranian plays. She acted in many plays that included playing a clown in Rajat Kapoor’s I Don’t Like It, As You Like It, for which she won a META for best actor in a supporting role (female).

“In college, I majored in acting and directing, and we had to direct our own plays,” says Jalali, who was not very keen on directing initially. “Once I came back to India, I was working more as an actor, but then I enjoyed working with students, and, so, I started directing school plays. I also started doing plays as part of the Rage Theatre’s Writer’s Bloc—one, Dreamcatcher, was co-directed with Trishla Patel, and one was solo. It happened organically because I am a very visual person.” It was during the third edition of Writer’s Bloc that Jalali did Jaal, based on a story written by Annie Zaidi.

She laughs when I call theatre an industry. “If you are doing a big play, for instance the Disney musicals or Mughal-e-Azam, there is no doubt that people will come and put money into that,” says Jalali. “But for small experimental groups, you have to work for a long time. I have been in the industry for 20 years, but it is only in the past three to four years that my work is being recognised for what it is.”

As far as the awards are concerned, she says it is a happy feeling. But, she does not take it too seriously. “It is fleeting, just like a show,” she says.