Spy stories, real and fictional, are tumbling out of the closet 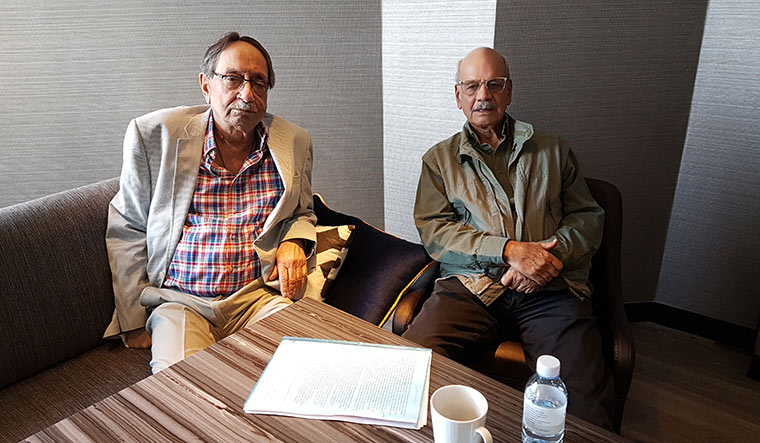 It was a warm afternoon. Harper-Collins publisher Krishan Chopra sat across former spy chief A.S. Dulat at a corner table on the deserted lawns of the Claridges Hotel. They sipped coffee. Dulat’s first book on Kashmir had come out and was being discussed furtively in the rather quiet middle lanes of Khan Market. Chopra broached the idea of another book, and Dulat mooted one of him being in conversation with a spy-chief from across the border. “He suggested General Durrani’s name,’’ says Chopra. “I agreed, of course. But, it was tough.’’ Two years later, The Spy Chronicles: RAW, ISI and the Illusion of Peace came out.

The idea of a former Inter-Services Intelligence chief—the Pakistan deep state, in flesh and blood—sitting across a former Research and Analysis Wing chief to talk in a civilised manner and at length about Kashmir, Mumbai 26/11, Balochistan, and even ISI vs R&AW, was inconceivable. “Frankly, when Mr Dulat suggested that we could do a book together, I suspected that it might be a trap,’’ quipped Durrani, in his message at the launch of the book.

The project was a secret, and the meetings—held on the sidelines of Track II events that both Durrani and Dulat were part of—were cloak-and-dagger affairs, so as not to arouse suspicion. The two would stay back in a city—Istanbul, Kathmandu or London—after other participants left. They would then be joined by Aditya Sinha, the writer of the book, before being closeted in a room to just talk. It took two years of such meetings, before the book was born.

The Spy Chronicles is a concept that is far ahead of its time. The book, has caused havoc in the communities in both countries. If Dulat is being trolled in India, the army has ordered a court of inquiry against Durrani. He has also been banned from travelling outside Pakistan. It was not because of the secrets revealed; there were none. But because of the format. It allows the reader a rare glimpse—however tiny it is—into the shadowy world, through the conversation. The only secret spilled was that of Dulat coming to Durrani’s rescue when his son Osman found himself trapped in India post 26/11. Dulat was instrumental in getting him safely on a plane. But, it does point out the obvious—that conversations are possible.

Durrani is due to write another book, to be published in September. The fate of the book hangs in balance because of the controversy his latest book has generated. In the west, spies tell their stories. John le Carré made a career out of it, coming out only recently as an agent. Spies in the sub-continent are notoriously reluctant to talk. But, that is changing slowly.

If The Spy Chronicles is about a remarkable conversation, there is Raazi, the cinematic retelling of Calling Sehmat, a book about a woman who risks her life and that of her family to go across the border—this is during 1971, when India was at war with Pakistan—to pass on information to India. The movie has waltzed into the Rs 100 crore-club. Spooks, real and fictional, are coming out of the cold. “You will see more of this,’’ said Chopra. The publishing house has acquired a series called Spymasters by former R&AW counter intelligence head Amar Bhushan.

His last book, Escape to Nowhere, a very thinly disguised fiction, brought to the mainstream the sensational case of Rabinder Singh, a double agent for the CIA. A joint secretary with R&AW, Singh was caught on camera photocopying documents. He escaped to Nepal, and from there into the safe arms of Uncle Sam. Written in 2007, Bhushan published it five years later. He needed the time to ensure that he had not exposed any secrets. “Intelligence operations are based on trust,’’ he says. “As a responsible intelligence officer, I did not want to compromise any sources.”

V.K. Garg of Manas Publications, Delhi, has spent the last two decades motivating officers to tell their stories for the greater common good. His tagline—We Convert Fighters into Writers—is emblazoned in bold on top of his card. “We want to expose corruption,’’ he says. “It does not matter how big the person is.’’ It took Garg years to get Maloy Krishna Dhar to write Open Secrets: India’s Intelligence Unveiled. Published in 2005, the book is a tell-all that talks about how the agencies are used by the government. Once asked at a press conference if he was afraid of the agencies coming after him for revealing their secrets, Dhar answered that he had only touched ten per cent of the surface. The ninety per cent he knew was much more damaging, so he will be safe.

Dhar, who died in 2012, was not the only insider who talked. B. Raman, an original Kao-boy, recruited by the formidable spymaster R.N. Kao has written a series of books about the agencies. Kao engineered the liberation of Bangladesh, and quietly merged Sikkim with India. Raman was a keeper of many secrets, including the lengthy negotiations Rajiv Gandhi had with Sikh leaders before 1984.

R.K. Yadav, author of Mission R&AW and the head of The R&AW Employees’ Association, says, “There was a big game to stop my book from coming out. But if the Pentagon papers can come out, why should there be a cloak of secrecy for operations dating back to 1962?” Yadav’s next book deals with the Nanda Devi operation. Again, it is history that he believes needs to be told.

In R&AW, everything is a secret. Major General V.K. Singh remembers the time he got an invitation for a tea party. “It was marked secret,” he says. “I asked the man who had been assigned to me how a tea party could be a secret? He said, “Everything here is secret.” It is a conversation he has not forgotten. In 2007, he wrote India’s External Intelligence and was booked under the Officials Secret Act. Eleven years later, he is still fighting that case.

“Let me say, no one, also from fields other than “intelligence’’ would ever spill the beans,’’ says Durrani. “Ratios, all of us decide for ourselves—that is self-censorship. Truth is merely what we believe to be the truth.’’

Even in The Spy Chronicles there are parts that have been edited out. “There are bits we have left out because we wanted the book to be breezy,’’ says Aditya Sinha. “So, the conversations on China are not in the book. But, there are other bits, which were edited out, because either of the gentlemen felt their neck could be on the line.’’

Secrets need to be preserved. Even cold ones. It has taken six years for Bhushan to be ready to publish another book A Zero Cost Mission/ The Wily Agent. The long cooling-off period was intentional.

Harinder Sikka, the loquacious writer of Calling Sehmat, lived with the story of Sehmat Khan for eight years before he wrote it. There were trips to Pakistan, to verify the facts. She used to tutor Yahya Khan’s children. He has proof. “I am about to reveal her identity,’’ he says. “She is no more. Human mentality is that you want to see a person to make the person an icon. And, she is an icon.” Everyone is not on board with his decision. National Conference leader Farooq Abdullah begged him, in a letter, not to go ahead. Abdullah writes that there are many Sehmats in the valley. This is his attempt to protect them.

Raman, the former R&AW chief, admitted that there were bright women agents. And, the core of the story—of families that had links across the border and intermarried—is true. Elements have been dressed up to protect the family and the name. “Spies have a phenomenal impact, but they remain unsung,” says Sikka.