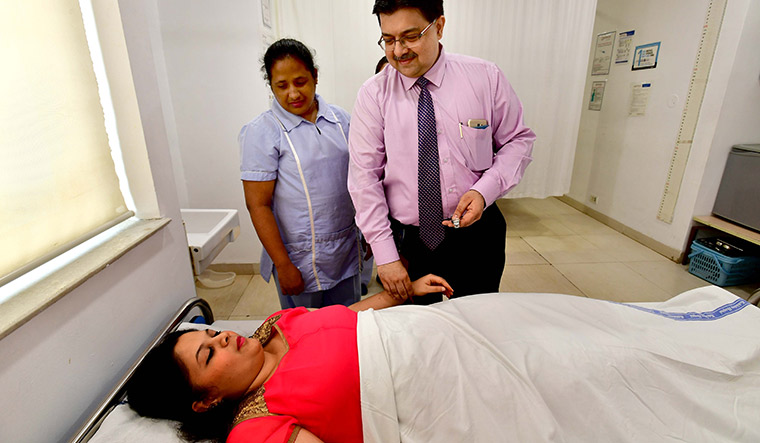 On October 27, the National Institute of Mental Health And Neuro Sciences (NIMHANS), Bengaluru, offered the public a one-day guided tour of the institute, for the first time in its 43-year history. Titled ‘Stories against stigma’, the programme hoped to encourage people to come forward and seek help for problems of the mind. It was also an attempt to dispel myths of “lunatic asylums” or “mental hospitals” being places where people are ill-treated with shock treatments or by locking them up in small, dark rooms against their will.

Over the past few years, newer ways of treatment have been introduced by Indian institutions in the field of mental health care. For instance, NIMHANS has developed modules integrating yoga with mental health and research. Baking classes and computer training are conducted for the mentally challenged. “Hospitals are taking mental health much more seriously than before. They are more welcoming and patients, too, are more willing to seek help,” said Dr Shaunak Ajinkya, consultant psychiatrist, Kokilaben Dhirubhai Ambani Hospital, Mumbai. He says that in the past two years, almost 60 to 65 per cent of his patients in the 15 to 40 age group approached him with problems of acute depression, anxiety, marijuana and alcohol addiction and panic disorders, with many having attempted suicide. “The good part is that they are seeking help; the sad part is that they are reaching a level where they have to seek help,” he said.

Technological advancements have made it easier for doctors to address several psychological issues by way of highly modified medication, rather than relying completely on complex machine-enabled therapies such as electroconvulsive therapy (ECT). ECT is an electric shock treatment to stimulate the brain, long used on patients with severe depression or bipolar disorder. “We now have advanced drugs such as ketamine—an anaesthetic drug that works like a charm on patients struggling with severe depression and anxiety issues, and especially on patients with high proclivity for suicide,” said Ajinkya. “It has only been a year since its anti-depressant effects were discovered in the west, and we have now begun using it here.” Ketamine induces a trance-like state while providing pain relief, sedation and memory loss only for a few hours. “I tried it for the first time on my patient who had turned depressed and suicidal because of marital problems. Her [condition] went from severe to mild within a week,” he said.

The main reason for the stigma of mental treatment in India has been the image created of ECTs by pop culture. But in reality, the procedure is the last resort. “If necessary, we do give the ECT, but under very controlled environments and local anaesthesia. There is no disputing the fact that it works in certain cases,” said Ajinkya. He also talks about the use of magnetic therapy, such as the repetitive transcranial magnetic stimulation (rTMS), to stimulate certain areas of the brain. “It is not currently available to us, but I am sure we will get it in within a year,” he said. Dr Kersi Chavda, consultant psychiatrist, Sir H.N. Reliance Foundation Hospital, Mumbai, said that drugs earlier had a number of side effects because they would act on a variety of receptors. But, the modified drugs today work more specifically on the receptors that one wants, eliminating side effects.

The field of psychiatry is expanding beyond just specialists like psychiatrists and psychologists. Neuro-rehabilitation teams now have a speech and voice therapist, an occupational therapist and a physiotherapist, among others. This is also because cases of mental illnesses are rapidly rising. According to the latest report on global mental health released by the Lancet Commission in October, mental ill health is on the rise, thereby leading to disability, early death and poverty. As per the report, those with mental illnesses account for 6.5 per cent of India’s population, and the figure is estimated to increase to a shocking 20 per cent by 2020.

Thanks to the large number of awareness programmes, people have come out in numbers to report psychological issues. Said Chavda: “A man in his 40s came to me, seeking treatment for anxiety issues after his school-going son prodded him to do so. He said that the boy was told about mental ill health and he felt his father should get himself checked. It is no longer considered shameful or taboo. Hospitals are doing everything they can to make sure those who are mentally ill do not feel sidelined anymore.”

Doctors have also taken considerably well to the digital medium. For Chavda, providing consultation or assisting with reports over video calls has become common. Dr Rajiv Mehta, consulting psychiatrist, Sir Ganga Ram Hospital, New Delhi, says that many patients first run a self diagnosis using the internet by reading, chatting and watching videos. Only after all this do they meet the doctor. “We look forward to the time when we can record the voice and video of the patient and then match them with the speech and facial parameters of depression, using artificial intelligence as a statistical tool,” said Mehta. “That way we can get exact results, and the person can be sure if she is suffering from depression or not.”