A couple, who lost their son to 26/11 attack, wants wider surveillance across Mumbai 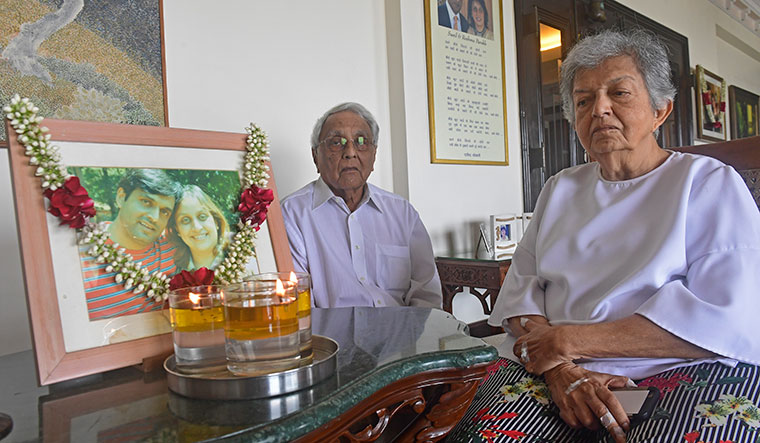 The good fight: Sevantilal and Sarla Parekh with a picture of their son and daughter-in-law.

This was Sunil Parekh’s last text to his father, Sevantilal: “Dad, prevail over mom, but see to it that we buy that flat. Our children will bless us.” Minutes later, he and his wife, Reshma, were killed when terrorists opened fire on diners at the Tiffin restaurant at the Oberoi hotel on the night of November 26, 2008. Tears well up in Sevantilal’s eyes as he shows the text on his phone and says, “He lives inside me. He is alive in me.” Sevantilal still drives the car that Sunil had gifted him twelve years ago, on his 75th birthday.

To Sarla Parekh, whatever happened to her son was destined to be. “I knew it was God’s wish,” she says. “Sunil always drove himself, but that night he chose to be driven. Had he been driving, he would have gone to park the car instead of entering the hotel at that time,” she says.

Sunil and Reshma are survived by their daughters, Arundhati and Anindita, who were 10 and 12 at that time. Both of them now reside in the US. The death of their parents had sent both girls into a state of shock. Sarla says that the scariest thing was that they never cried, “at least not in front of us”. “For almost three years, they would not even look at us, it was as if we were nonexistent,” says Sevantilal. “They would eat their food in their rooms and simply avoided our company. Those initial years were our worst nightmare.” With the help of friends, the girls passed all their exams with flying colours. “Today, both our granddaughters are NRIs, which means they will always be safe,” says Sarla. “I hope both settle anywhere in the world except India.”

The loss of her son and daughter-in-law turned this octogenarian into an activist. Or, as she puts it, “It made me a fighter cock.” For eight years, Sarla fought for the installation of CCTV cameras across Mumbai. In addition to her demand for surveillance systems at all important public spaces in Mumbai, she took it upon herself to ensure that all families of victims got their due compensation from the government. “I did not want others, who may be less fortunate than I am, to suffer the loss of their loved ones,” she says.

Sarla also filed a public interest litigation seeking less security for VIPs. “Even former UK prime minister Tony Blair had just three people as security, unlike our netas here,” she says. “I was even ready to fund the installation of [cameras across] the entire city with the money we raised. But, the Supreme court said it was the government’s job. But, even after a decade, they have not managed to equip the entire city with surveillance systems. Even today, anybody can create a ruckus and we will not be able to do anything.”