Best of both worlds

Maharaja Padmanabh Singh, a quintessential millennial who straddles between 2 worlds 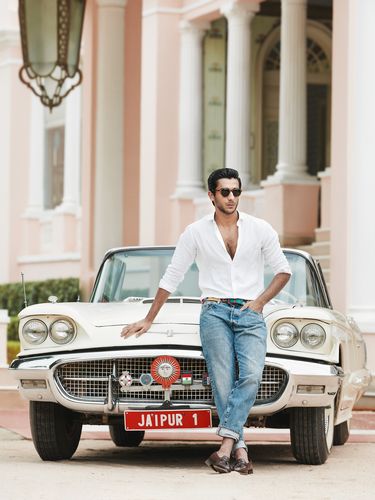 Modest majesty: (Facing page) Maharaja Padmanabh Singh at the Sujàn Rajmahal Palace, Jaipur. He is polite to a fault and wants to stay grounded.

The salmon pink old town bares open its chest to a complex of courtyards, lush green lawns, a fascinating museum and the loosely guarded residence of Jaipur’s first family. We catch the first glimpse of the City Palace on an unusually rainy afternoon. Wrapped in dark grey clouds, the 18th century facade stands magnificently tall with the royal family’s Pachranga flag piercing the dense monsoon sky. The Pachranga is not flying solo today; it has the quarter-sized Sawai flag for company, announcing the presence of the maharaja in the palace.

Dressed in a white linen shirt, fitted brown trousers and tasseled loafers, Maharaja Padmanabh Singh is lounging around in the Chandra Mahal. He is happy to be back home and chatting with his grandmother, Maharani Padmini Devi, after five months of touring Brazil, New York and London. Lean and athletic, the 20-year-old maharaja exudes a youthful charm that is hard to ignore. He is polite to a fault, and if not for the glamorous setting, one tends to forget he is ‘His Highness’—the 12th titular maharaja of Jaipur.

In between shifting his temporary residence from New York (where he was studying liberal arts) to Rome, Padmanabh set out on a backpacking trip to Brazil. “I just packed a pair of denims and two T-shirts and hit the favelas with a friend. The place can be dangerous, [what] with all those drug lords and stories of people shooting each other,” he says. “We visited a school run by an Italian lady at one of the favelas, and it inspired me to pursue this dream of mine to start a charity. I felt the kids there were really happy to be in a secure environment. It was a little heaven, where children from various nationalities mixed so well with each other. I want to do something similar back home and have been discussing the idea with my family.”

With his royal legacy, sartorial flair, dashing looks and unmatched humility, the young king cuts an intriguing figure. From representing the country as a professional polo player to walking the ramp for Dolce & Gabbana in Milan to hosting guests à la royalty, Padmanabh straddles between old-world luxury and modern high living quite effortlessly. “I am not a minimalist,” he says. “I like grand rooms, old family photographs, paintings and period furniture. I don’t like to be on the 40th floor of a tower with no privacy, like my apartment in New York. I love towns like Paris and Rome with lots of history. I lost my heart to Italy; it is the most beautiful country in the world. With its old buildings and grand architecture, it always feels like home.” He will be moving to Rome this month, where he will be studying art at a private university. “The shift will help me manage commitments back home a little better. The long distance wasn’t helping my polo career, either,” he says.

As a child though, Padmanabh was not too keen on polo. “I would always hear about it at home. All the conversations and celebrations revolved around the game, so it kind of made me wary of it,” he says. “However, when I went to Mayo College [in Ajmer] and had the freedom to choose a sport, I instinctively went with polo. When I started travelling for the game, it opened up a whole new world for me.” It gave him a distinct identity, he says. “At 18, I was the youngest player to represent India. Then, at some point, my mother (Princess Diya Kumari, BJP member and MLA for Sawai Madhopur) realised that I needed to pursue my education, and I enrolled at the New York University. The last six months have been tough, away from the game,” says Padmanabh, who is looking forward to getting back with the game in the European circuit. “It is nicer as compared to the US. You can drive the horses from point to point, even if it is from London to Italy.” 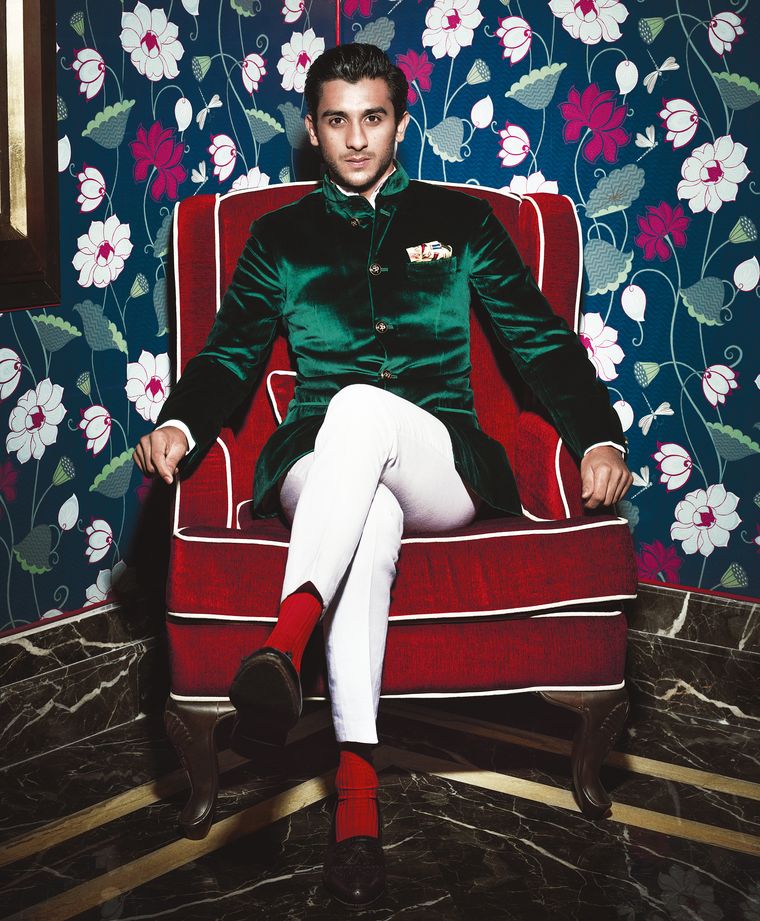 Style statement: Padmanabh likes to dress in velvet bandhgalas, made by a tailor who has been working with the family for generations.

Padmanabh and his father, Maharaja Narendra Singh, together own 25 horses in India and in England. “With the amount of polo that I play, we need that many horses,” he says. “I play like mad, and you need seven to eight horses per day. Sometimes, I play in Mumbai in the morning, in Delhi in the afternoon, and in Jaipur the next morning.” He wants to breed his own horses at some point. “My great grandfather, Sawai Man Singh II, took his horses from Jaipur to Europe and won the first Polo World Cup for India in 1957. You always stand a better chance of winning with your own horses, otherwise it all depends on the draw. When I play in Europe, I try to get my horses from London,” he says.

When in Jaipur, Padmanabh divides his time between family and the horses. There is no time for any other addiction besides polo, he says. “A lot of patience goes into the training of a horse, close to three years from the time you buy one. I also have to keep myself extremely fit and light, because polo is like playing golf during an earthquake. Not only do you have to control the horse, but also play around with the ball. It is impossible to eat clean when I am in Jaipur, so if I go out with friends, I work out harder for the rest of the week to keep fit,” says Padmanabh, who has also played a couple of matches with Prince William and Prince Harry in England.

Adopted by his maternal grandparents—Maharaja Bhawani Singh and Maharani Padmini Devi—at the age of four, Padmanabh got the first taste of a commoner’s life as a student at the Mayo College. “My boarding school shaped me the way I am,” he says. “It was a tough life with strict discipline and no luxuries. We had a dormitory of ten, with just one slow-moving fan in the room in peak summers. Then we used to have Army camps in July at places full of mosquitoes, and I would spend my birthday there. I was a chubby little kid with my fancy shirts signed by Ronaldo. Nobody at the school has any privileges, the family backgrounds do not matter and then you get teased because you are so-and-so. However, the friends that I made at Mayo would last forever. And now when I travel the world, I am not fancy about anything. I sleep on the floor in my friends’ homes, travel by trains and eat at local restaurants.” 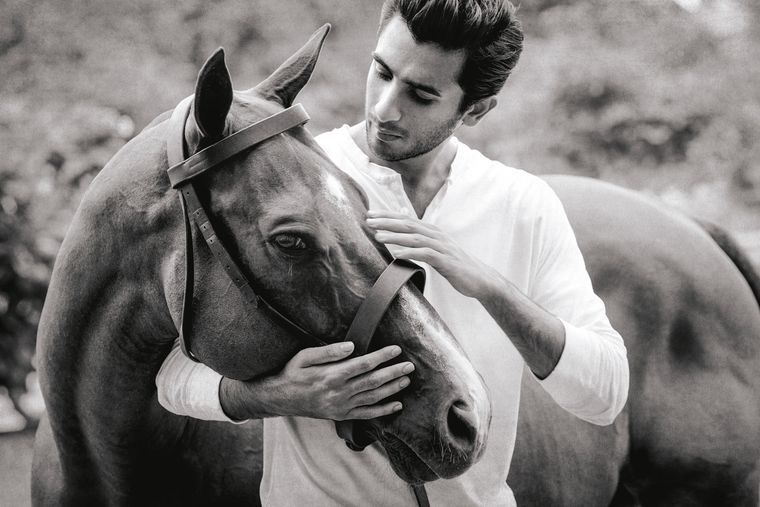 Polo Addict: Padmanabh, along with his father, Maharaja Narendra Singh, owns 25 horses in India and in England.

Padmanabh counts his grandparents as the biggest influencers in his life. He has modelled his life—his wardrobe, the art of hosting guests and the love for polo—after his maternal grandfather. “My parents always cited the example of my grandfather who served in the Indian Army, never drew a salary and ate while sitting on the floor with the jawans,” he says. “I try to idolise him and stay as grounded as I can. Then there is my grandmother who pulls me down every time I try to fly or get influenced by things around me.” His eyes light up at the mention of his grandmother, who gave him his nickname, Pacho. “She used to watch this Spanish TV series called Gata Pacho, and started calling me Pacho. The name stuck. Now my sister is called Peecho, and my younger brother is Peekachu,” he says, with a warm smile.

Though he grew up surrounded by opulence, luxury, for him, “is all about being comfortable with one’s style”. “It is really important to identify your own style, he says. “I don’t like to fiddle around too much with my style, and try to be as elegant as possible. At gala events and parties abroad, I like to dress in velvet bandhgalas made by this tailor who has been working with our family for six generations. If you look at my wardrobe, you will see it is styled just like my grandfather’s. I got really lucky. I am the same size as him, and I have inherited a lot of clothing from him.” A nice bandhgala is the chicest thing you can ever wear, he says. He also enjoys wearing suits. “The beauty of it all lies in the details—the initials on the shirt, details on the buttons. I don’t hanker after logos, and I only shop from vintage stores abroad,” he says. His wardrobe must-haves: a smokey black tuxedo, black velvet bandhgala, elegant linen kurtas, Venetian Friulane shoes and juttis.

As we move in and out of the palace grounds, looking to capture Padmanabh in various moods, photographer Tarun Khiwal points out his unmistakable charisma. “He is so comfortable in his skin, so confident about his style and so good looking. No doubt, he is going to be the next big fashion icon globally,” says Khiwal, who has been working with the who’s who of Bollywood for nearly three decades.

So, how does the new-age maharaja strike this beautiful balance between his royal inheritance and the new world order? “We are in a democracy now, and I cannot let my background go to my head,” says Padmanabh. “At the same time, I cannot ever be satisfied to just live in this bubble and not travel the world. The cue is to find a mix of the two worlds. I represent the history of thousands of years, and it is my duty to act as its ambassador; not just in India, but abroad as well. At the moment, I am focusing on my life, but I want to create Jaipur as a destination, host a lot of people and popularise Rajasthan’s art and culture.”

Travel will always be his first love, says Padmanabh, who often combines his polo trips with new destinations. “Travelling teaches me a lot of lessons,” he says. “New York, for instance, made me discover two things—Netflix and sushi. Cooped up in my apartment with a bunch of friends, I watched Game of Thrones all winter. I realised sushi was so cool! Naples taught me the art of classic suit-making, and I realised that real beauty lies in simplicity—like the pasta they do, only with tomatoes and nothing else.”