High on taste and health benefits, gut friendly food finds its place on many a menu 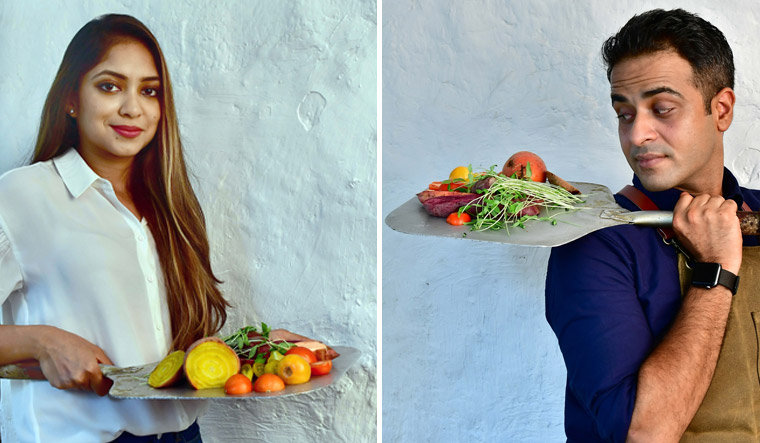 There is a new fad in town—gut friendly food—and it is healthy and here to stay. Chefs are incorporating gut friendly bacteria culture, which involves various techniques such as fermentation and preservation, in their food. And, helping them are a bunch of dynamic people like Rakhee Jain Arora, who quit her job in public relations and marketing, to follow her passion for fitness. A nutrition consultant, she found Zen Tiger Kombucha, and sells it commercially today. But, what is kombucha? Simply put, kombucha is a fermented tea drink that is really good for your gut, and though China and Russia lay claim to it, its exact origins are a bit hazy. It is, however, safe to say that it has existed for more than 2,000 years. Rich in antioxidants, it aids digestion, and is good for your brain and heart health, too. When fermented, it gives out a lot of organic acids, which is great for the system, and also helps in reducing sluggishness, says Arora.

Arora picked up the culture and the fermentation starter from a farmers’ market in Australia. To prepare kombucha, she not only converted a room in her Mumbai house, but also tied up with a food scientist to take care of the lab work. Here’s how it is done: Arora uses green and black tea, brewing it for some time, after which she adds sugar and lets it cool down. Then, she adds the starter tea (like how one would use previous curds to prepare a fresh batch). Using a culture called SCOBY (Symbiotic Culture of Bacteria and Yeast), she leaves the brew to ferment for 10 to 21 days. For flavour, she adds chopped fruits such as strawberries.

The first fermentation, says Arora, happens in big jars, after which it is transferred to smaller ones. “That way it uses up the sugar of the fruit and gets the flavour and the colour,” she says. Also, during the first fermentation, the jar is not shut with a lid, but covered with a cloth, she says. The second time, a lid is placed over the jar as the fermented brew gets fizzy easily. “Plain kombucha,” says Arora, “has a tarty flavour and is really tasty.” She sells Zen Tiger Kombucha in 250ml bottles for Rs 150 each, and offers it in four delicious flavours—Classic, Rose with rose petals, Apple and Cinnamon, and Hibiscus and Kokum.

Likewise, Moina Oberoi, who trained at Natural Gourmet Institute, New York, and consults as a health food chef, launched MO’s Superfoods in 2016, with the idea of introducing more natural probiotic food in the market. She started off with kefir, a 100 per cent natural yoghurt drink found in eastern Europe, labelling her beverage MO’s Kefir. Originally found in the Caucasian region, kefir was a chance discovery. Villagers who would trek to the mountains used to carry sacks, made of goat intestine, of milk. “By the time they would reach the villages, it would coagulate and make the milk into what we now know as kefir. They intuitively knew it was good for them,” says Oberoi. “Incidentally, it is also the region which has the maximum number of centennials.” 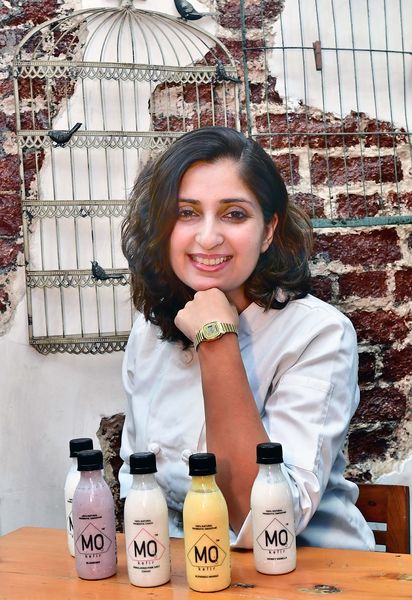 In India, says Oberoi, we have very little active bacterial cultures because a lot of our food is cooked down. Our probiotic drinks are yoghurt-based lassi and chaas, made out of curds that tend to have one to three strains of good bacteria. Kefir, she says, “has 40-50 strains of good bacteria”. Yoghurt is creamier and dense, whereas kefir is thinner but is probiotic, says Oberoi.

When Oberoi moved back from the United States, she didn’t have the culture with her, and it was a friend who got her the kefir grains. “It is this alien looking, live active culture, which kind of looks like a gelatinous cauliflower,” she says. “So, that’s what you put in the milk to ferment it and then once it is fermented, you strain it. The active culture feeds on the lactose in the milk while multiplying, converting that into probiotics and making it 99 per cent lactose free.”

Oberoi says her interest in the health food space peaked during her teens and in her 20s when she suffered from muscle inflammation and later fibromyalgia, a neuromuscular disorder. “That is when I realised food has such power in terms of healing,” she says. Though it was some time before she got to the gut, she says once she focused on diet and fermented food, she felt the difference overnight.

Three things kill our gut bacteria—antibiotics, processed food and stress, says Oberoi. “A lot of Indians have stomach problems and gut issues.... It is a strong indication of the gut flora being imbalanced,” she says. “Kefir is natural, easy on the stomach and helps with the overall immune system.”

“Not only are they associating gut health to a lot of mental disabilities, but there are a lot of studies about the gut actually being the second brain and how there is a huge connection in our gut health and our emotions,” says Oberoi. “Besides, today, customers are taking it [kefir] for IBS [irritable bowel syndrome], acidity, bloating and general gut issues and, because I have been vocal about my condition, we have also seen people taking it for autoimmune diseases.”

Chefs, too, have cottoned on to the trend. “Kefir is in a lot of beverage menus in [Mumbai] cafes such as The Nutcracker, I Think Fitness Café, 212 All Good, The Bagel Shop, Kala Ghoda Café,” says Oberoi. Glyston Gracias, chef, Impresario Entertainment and Hospitality, who handles Smoke House Deli and Social in Mumbai, says he was looking for something new and unique for the vegans when he came across MO’s Kefir. “It was a trendy superfood, and I decided to add it to our smoothies and shakes,” he says. Gracias even used it as a marinade for salad dressings. “It was basically chicken breast marinated in kefir served over assorted lettuce, topped with crispy organic red rice and apricot dressing,” he says. “The dish was called Kefir Soaked Chicken + Organic Red Rice + Brown Rice Flakes, and the smoothie was called Soul Smoothie and came with fresh apple, banana, mango, spirulina tablet and kefir milk.” The dressings and dips that he prepared in yoghurt format were also a big hit. For the hot summers, Gracias is planning a kefir ice cream, similar to frozen yoghurt. “I will go with mango blindly, or maybe even passion fruit,” he says. 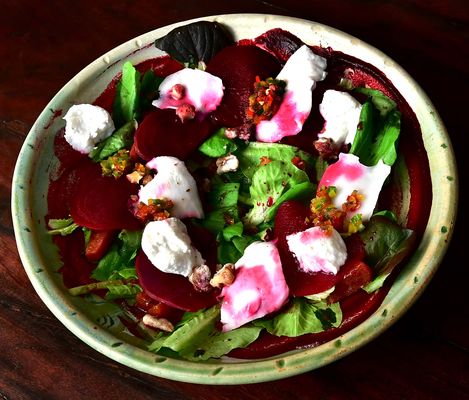 Chef Rishim Sachdeva, executive chef, Olive Bar and Kitchen, Mumbai, who has worked at The Oak Room and The Fat Duck in the UK, is into clean eating in a big way. For ‘gut friendly’ food, the flavours that he is trying to incorporate are “super fresh and super modern”. “All our techniques and cooking methods were based around hygiene. That is why, people were so healthy,” he says. “They preserved a lot of stuff. Take mango pickles, for instance, which lasted all year round; same with chutneys. And, we didn’t even have refrigeration back then. I have done the same thing, brought that back and tried to do more interesting things with regular ingredients. Whatever is seasonal, you will see on the plate.”

Sachdeva, who wants to stay as close to nature as possible, likes to know where his produce is coming from, and has his ears to the ground. “Farmers tell me what is in season, what they are planting and what is going to come and when,” he says, “so that way I can plan ahead, instead of me telling them I need this or that. That is not fair on the sustainability factor and on the consumers also.”

Say, a particular ingredient is not in season, but you want to incorporate that particular flavour, maybe in a dressing or in a broth or in a consommé, Sachdeva says, “That’s when the creative techniques or going back to the roots come in. Somehow, that preserving factor leads to the gut friendly food factor of it.” He recalls how, not too long ago, he was desperate for apricots and while it was easy to call up their import supplier and get it, he instead sourced 20kg from the Himalayas. “Since they had only one harvest, we had to preserve it,” he says. “So, we did a nice fermented apricot puree, and serve it with our Burrata Cheese Salad and heirloom tomatoes with fresh strawberries, perfect for summery afternoons. It is very gut friendly because it is fermented and has the good bacteria in it, and is clean, organic and has zero pesticides.”

Sachdeva also does a lot of Kimchis (Korean dish made from salted and fermented vegetables) with their barbecue chicken dish, which is good for the gut as it helps digest food better. From his recent travels to Vietnam, Cambodia and Thailand, he picked up a lot of fun ideas about how to treat ingredients. “For example, if you ferment red pepper for three days, it becomes slightly salted, but if you keep it for longer, say for a week, it becomes spicy and that can replace a spicy dip on any given day,” he says. “It has got that nice kick to it.”

Sachdeva uses kefir grains, too. Oberoi gave him the starter culture last year. “We haven’t ordered a fresh one,” he says. “It gets better every time. It gets tangier.” Sachdeva uses it in the lamb ribs because it is “nice and acidic”. “It works very well with a fatty lamb, it just cuts the fat through and you taste things better,” he says.

For the Three Beetroot Salad, one of their top sellers, and a vegan dish, they source beetroot, in three different colours, from a farm in Nashik. “Golden beetroot tastes very nice, and there is also the ruby beetroot, which is sliced and pickled slightly,” says Sachdeva. “We serve it with a homemade coconut yoghurt, which is left to ferment for a day. It is super light and helps you with digestion. It is a good replacement for cheese, and obviously the beetroot is really fresh, and the lettuce and microbeans are grown in-house.”

It is important to not scare diners away by calling things “gut friendly”, and so the right communication is important, says Sachdeva. “The minute you say ‘gut friendly food’, you get into that bracket of health restaurant chain,” he says. “But, once people start reading the menu, they know that there is comfort food, which is sourced and processed in a way that is actually good for your health, rather than restricting yourself to ‘fully vegan’ or ‘gluten free’ or ‘only vegetarian’.” A great deal depends on what the body demands, and how it reacts to the gut friendly food. Also, it is different for people across the spectrum, from millennials to the health-inclined 40-45 year-olds.

“The fun factor about kombucha” says Sachdeva, “is that it carries on fermenting. The good bacteria helps the sugar to turn into alcohol, which is slightly tangy, making it delicious. The fact that it can get carbonated nicely means that it can replace a soft drink easily.” He further explains how they also do a rye bread, almond milk, salmon and beetroot using kombucha, which is served as an appetiser on the menu. They make almond milk using kombucha with fresh almonds and elderflowers, which gives fragrance, freshness and adds richness to the dish, rather than using butter and fat. For the rye bread, they use kombucha, instead of water, to prepare the dough for the loaf.

From curing salmons to braising beetroots, Sachdeva sure seems to be having lots of fun preparing gut friendly food. “Our idea of food,” he says, “is that it should be tasty, it should be healthy and it should give you a good memory.”