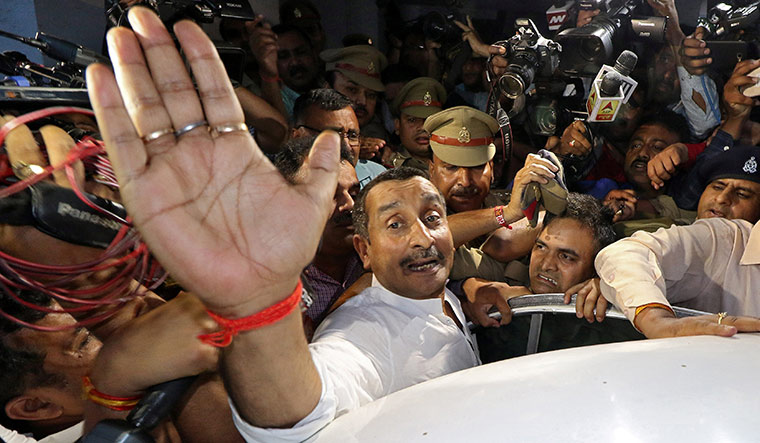 BJP leaders and workers are not allowed here because women and girls live here”. So read some recent posters at the Shivkuti locality in Allahabad. The posters, signed by residents, were perhaps the harshest criticism Yogi Adityanath has faced in his one year as Uttar Pradesh chief minister. “These posters are in protest of [the state government] shielding the accused in the Unnao rape case,” a resident told THE WEEK. “And, [also against the] poor law and order in the state.”

Till recently, Yogi had been the BJP’s poster boy. He was even roped in to campaign in other states. Now, however, his hold on his own state seems weak. One of his MLAs is accused of rape, and several others have openly revolted against him. So, is his charisma fading?

“Whatever he used to say was gospel truth, but now the situation seems to be changing,” said a BJP leader requesting anonymity. “The results of Phulpur and Gorakhpur [Lok Sabha byelections], mishandling of the Unnao rape case, and the revolt by his own men show that Yogi’s magic wand is not working any more.”

The biggest blow to Yogi was the Unnao rape case. The incident grabbed attention when, on April 8, an alleged minor from Unnao tried to immolate herself outside Yogi’s office. She accused him of shielding BJP MLA Kuldeep Singh Sengar, whom she said had raped her. Reportedly, the alleged rape happened last June. The girl’s family said they had approached the police, who refused to file a first information report. The family also complained to the chief minister’s office and even the prime minister’s office. But, it seems the law and order machinery slept on it.

After much controversy, including the death of the victim’s father and the intervention of the Allahabad High Court, the case was handed over to the CBI. The agency arrested Sengar on April 13. He will be in CBI custody till April 21. The CBI also arrested Shashi Singh, who was accused of taking the victim to Sengar’s house on the pretext of getting her a job.

Though there are multiple charges against Sengar, the agency is focusing on the rape, said CBI officers. The agency is also investigating Sengar’s claims that he was not in Unnao the day the alleged rape took place. 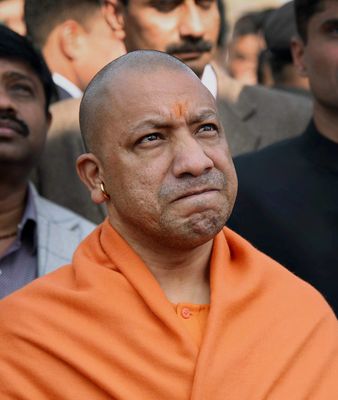 “The allegations by the girl are nothing but a drama to spoil my political image,” Sengar had told THE WEEK. “The girl tried to immolate herself. This is a well thought-out conspiracy against me. Some of my opponents have used this lady as a tool to take revenge against me.”

His wife, Sangeeta, said, “My husband is no way involved in rape. He has become a victim of political conspiracy.”

The victim, however, told THE WEEK: “Ever since my family approached the court, the MLA was nursing a strong grudge against us. They were putting immense pressure on us to withdraw the case. He had threatened us that he would teach us a lesson.”

Sengar, a four-time MLA, is known in his constituency for his “muscle power”. An agriculturalist, he belongs to the area’s dominant Rajput caste and is one of the most influential Thakur leaders in the area.

In the rape case, however, his influence has not worked. The case had put a lot of pressure on the Yogi government. In fact, BJP president Amit Shah had called and asked him to take quick action. The case has spoiled the party’s image. Said Samajwadi Party president Akhilesh Yadav: “After this shameful incident, the chief minister should immediately step down. This is a serious case, and there are direct allegations against ruling party MLA.”

Apparently, at the eleventh hour, Sengar had tried to meet Yogi in Lucknow. However, Yogi refused to meet him.

Meanwhile, the state government has also been facing flak for its decision to withdraw a rape and kidnapping case against former Union minister Swami Chinmayanand. The victim in the case has sent letters to the president and the district judge, objecting to the withdrawal.

Amid all this, Yogi’s own style of functioning seems to have alienated many in the state. Recently, Gorakhpur-based Ayush Bansal went to Yogi to lodge a complaint against Nautanwa MLA Aman Mani Tripathi. “He not only snubbed me, but threw my file,” he said. “Yogiji plainly told me to get out of his sight and that my work would not be done.” Bansal’s complaint was that Tripathi grabbed land from him. Interestingly, Tripathi, an independent MLA, is accused of murdering his wife.

Some senior bureaucrats said they felt Yogi’s behaviour did not match his image and stature. His office, however, has remained silent on the matter.

Voters aside, there is also discontent within the BJP. Savitri Phule, BJP MP from Bahriach, has accused the state government of diluting the rights of dalits. She told THE WEEK: “Some ministers at the Centre and the state and a handful of BJP MPs are working on anti-dalit policies. They are also trying to end reservations. Being a dalit leader, it is my duty to protect their interests.”

Said BJP MP from Robertsganj, Chhote Lal Kharwar: “The local administration does not listen to the complaints of lawmakers. Even my meeting with the chief minister did not change the situation.” Kharwar even wrote a letter to Prime Minister Narendra Modi regarding Yogi’s behaviour. Apparently, Kharwar, a dalit, told Yogi about rampant corruption in his district administration and that local BJP leaders were working against him. Yogi, apparently, did not take his complaints seriously. Kharwar, who heads the BJP’s state SC/ST cell, has written to the National Commission for Scheduled Castes and Scheduled Tribes.

Etawah MP Ashok Dohre, another dalit, has also written to Modi, saying that the Yogi government has been wrongly framing dalits in the aftermath of the recent dalit unrest.

Some other MPs have complained that it takes ages to meet the chief minister.

Allies, too, have attacked Yogi. Said Apna Dal MLA Hari Ram Chero: “The chief minister does not have adequate political maturity. He is new and he takes a long time to comprehend any situation. The government is not serious about many issues, including providing jobs to the unemployed.”

Om Prakash Rajbhar, a state minister and Suheldev Bharatiya Samaj Party MLA, told THE WEEK: “The chief minister is not following coalition dharma. Our complaints are not being heard, and there is no proper grievance redressal system.” Rajbhar, whose party has four MLAs, had earlier met Shah in Delhi and threatened to reconsider his support to the BJP.

The chorus of complaints has alarmed the BJP’s top brass. In fact, on April 10, BJP president Amit Shah landed in Lucknow to assuage miffed leaders. He had been campaigning in Karnataka, but cut short the trip. Before that, the party’s top leadership had summoned Yogi and Deputy Chief Minister Keshav Prasad Maurya to Delhi. They wanted the rebellion in the party to be quelled.

Senior party leaders do not want any trouble in Uttar Pradesh before the 2019 Lok Sabha elections. Modi and Shah have reportedly told Kharwar to look into the grievances of BJP leaders in the state.

Yogi, however, said, “These allegations are baseless. Neither are the dalits being persecuted, nor are their representatives being given step-motherly treatment.”

Shah’s recent trip to Lucknow, however, seemed to tell a different tale. Upon landing there, he is said to have held marathon meetings. He also evaluated Yogi’s one-year performance, and witnesses say he was not pleased. He advised Yogi to hold regular meetings with disgruntled leaders and set up a proper grievance redressal system. He also told ministers to talk to MPs and MLAs on the phone and dispose of their problems within a certain period. The party, he said, should rebuild its image as soon as possible.