Hindu Ekta Manch was formed to save rapists, not Hindus 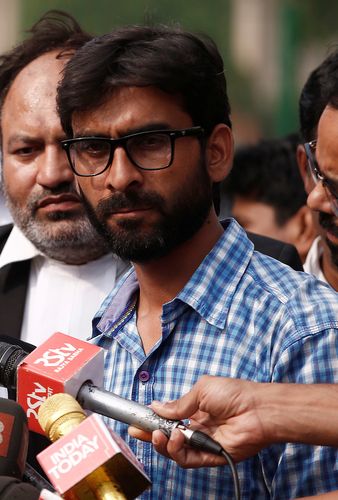 A young lawyer-activist from Jammu, Talib Hussain lead relentless protests demanding justice for the eight-year-old child who was raped and murdered, allegedly inside a village temple in Jammu. Like the victim, he, too, belongs to the Bakarwal community—a nomadic shepherd community. “Why not a Hindu-Muslim Ekta Manch or a Secular Ekta Manch?” he asks as he lashes out against the self-appointed Hindu group that defended the rape-accused.

Three months ago, when you first raised your voice for this child who was raped and murdered, did you know her or the family personally?

I am from the same community and I studied as a child in the same village where this incident took place. The moment I found out what had happened and her body was recovered on January 17, I spoke to the local police. I started organising protests.

When the issue was first brought to the Jammu and Kashmir assembly, how did various parties respond?

They suspended an SHO level police officer. Had the state assembly responded as they should have, to start with, none of this would have happened. I had to sit on a hunger strike to create pressure. Instead, the police locked me up and threatened me with a case under the Public Safety Act.

Early into your protests, you had also demanded a CBI inquiry. Now, those who defend the accused are also demanding the same. What is the difference between the positions of the two parties?

When we—All Tribal Coordination Committee (ATCC)—started our protest, we were told [that] the culprits would be arrested in 24 hours. That did not happen. Instead, a junior policeman, Deepak Khajuria [now accused of raping the victim and destruction of evidence], was given charge of the investigation. From the very beginning, he was hostile and abusive to us and the child’s relatives. He first warned us not to hold any protests, and then lathi-charged us brutally when we did. Remember, at this time the Hindu Ekta Manch did not exist, and no mainstream party was really supporting our cause. I did not know then that Khajuria was one of the rapists. But, I could sense that he was part of a cover-up. That is why we wanted a CBI inquiry at that time—because the investigating policeman was part of the conspiracy.

Now, you say the Hindu Ekta Manch—the self-appointed group that took out protests in defense of the accused—did not exist. How and when was it created? And, not just the BJP, local leaders of all parties, including the Congress, backed the Hindu Ekta Manch. Was this regional politics of Jammu playing out?

Look, this Hindu Ekta Manch was only born when we followed up on our hunger strike by appealing to the High Court to supervise the probe.

So, it did not exist till then?

No, it was formed later, only when the High Court took charge and Khajuria was arrested by the crime branch. Also, talking about political support for it, local Congress leaders who supported the Hindu Ekta Manch include a former MLA and former MLC, and a key leader of the Youth Congress [Romi Sharma]. They also made inflammatory speeches. The name of the Hindu Ekta Manch gives the idea away. Yes, there is nothing wrong with Hindu pride. But, given the backdrop in which it was formed, why not a Jammu Ekta Manch? Why not a Hindu-Muslim Ekta Manch? Why not a Secular Ekta Manch? Under this banner there was a clear attempt to mobilise Hindus with conspiracy theories. Also, I should mention that even the Panthers Party played a role in fanning the flames. So, yes, the BJP did support them, but so did all these other parties, including a leader from the National Conference (NC).

So, each one of the parties with presence in Jammu—the BJP, the Congress, the NC, the Panthers Party—were playing politics. And, what was the role of the BJP MLA [Rajiv Jasrotia]?

The day the two BJP ministers [Chandra Prakash Ganga and Lal Singh, who have now been sacked from the cabinet] attended a rally of the Hindu Ekta Manch, the local BJP MLA was also present at the rally. And, he spoke about how he would enforce the migration of the girl’s family and the other Bakarwals from the village. Where is he now? He seems to be missing for the last few days. He is underground.

A lot of people have asked—why bring religion into the conversation; talk of it only in terms of sexual violence and the rape of a child. But, you have charged that one of the motivations for the rape of the child was in fact to drive out the the Bakarwals from the area.

Yes. Let me share that Sanji Ram—whom the police have called the mastermind of the rape and murder, and also the man who had the keys to temple [where the child was kept hidden]—has been leading a campaign against the tribal community. He told the villagers not to allow Muslim Bakarwal tribals to use land and leaves for their cattle. By the way, the Bakarwals pay for this right. A falsehood is being spread that the tribals want rights to the land. No, we only want grazing rights or forest rights.

Can you prove that Sanji Ram said this? Do you have a recording?

Yes, there are eyewitnesses.

You are alleging that Sanji Ram was fanning an anti-Muslim and anti-Bakarwal sentiment.

Yes, this will all come out. I am confident. And, this Hindu Ekta Manch was formed not to save Hindus, but to save rapists.

Now, in the media reporting, there has been a degree of confusion about the child’s adoptive parents and her biological parents. What most do not know is that the child was living with her uncle because three of his children had died in an accident. But, is there a difference in what both sets of parents seek from this case?

The adoptive father was put under initial pressure to demand a CBI inquiry. However, there was no legal adoption; it was just an informal arrangement between relatives. So, the right to take decisions on how to pursue this case remains with the biological parents, and it is their voice that has been put forth in the Supreme Court

Critics have questioned your credibility. They point to a case you face on an attempted murder. How do you respond?

In 2013, a young boy in my community was beaten by the police, and he died. Because I led protests against this, a false case has been registered against me. The case is false, and, I am sure, I will be vindicated.

You are also a Bakarwal. Your parents died in the floods in Kashmir. Can you speak of your own childhood in Jammu?

I am proud I grew up in Jammu. I go to Kashmir as a tourist. I can speak Dogri perfectly. My best friends in school were Hindus. I used to go to school barefoot, because I could not afford shoes. But, my Hindu friend’s mother gifted me a wonderful pair of shoes. I cry today when I remember that. There is love between Hindus and Muslims. It is politicians who are trying to create trouble.