With Flipkart firmly under its control, Walmart is looking for a turnaround in e-tail 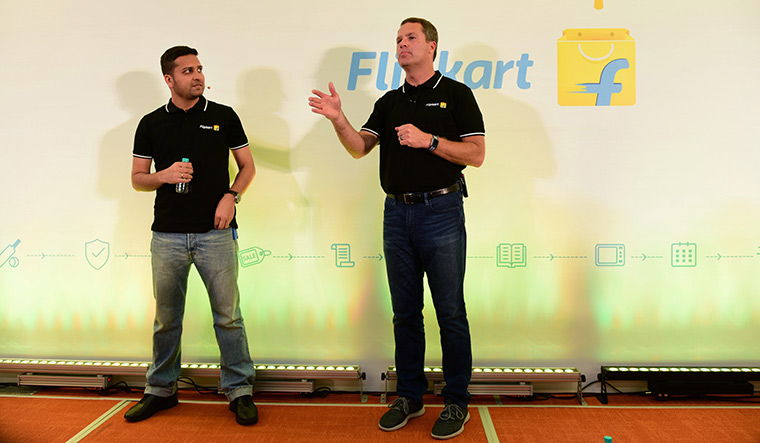 THERE HAVE BEEN many versions of the developments that led to the resignation of Binny Bansal as the group CEO of Flipkart, India’s largest e-commerce company which he cofounded 11 years ago. There has been, however, only one consequence—Flipkart is now under the firm control of the American retail giant Walmart, which acquired a majority stake in the company in August.

Flipkart has been in a state of transition ever since Walmart pumped in $16 billion for a 77 per cent stake in the company in an attempt to outsmart Amazon, the world’s largest e-tailer by revenue, in the fast-growing Indian e-commerce sector. “This is akin to conducting a surgery in a moving train,” said Alok Shende of Ascentius Consulting. “Flipkart will be under constant competitive pressure, and under this regime, it will have to deliver robust financial results.”

Walmart’s investment in Flipkart was a response to the rapid rise of Amazon in the US. “Amazon doubled its revenue in four years while Walmart saw just a 2 per cent growth during the same period,” said Rajiv M. Ranjan, chairman and managing director of the startup PaisaDukan and a keen observer of the e-commerce space. “Walmart is already paying the price for its late awakening to e-commerce. While Amazon dominates the US e-commerce with a 43.5 per cent market share, Walmart has a nominal presence with just 3.6 per cent.”

With Flipkart in its kitty, however, it is a different story in India. Flipkart is the market leader with a 35 per cent share against Amazon’s 30 per cent. Along with its subsidiaries Myntra and Jabong, it is ahead in gross merchandise value (total value of products sold over a period) as well.

In India, e-commerce dominance is determined by the sale of electronics and apparels. “Walmart should focus on consolidation to improve the competitor behaviour,” said Ranjan. “Multiple apparel acquisitions and new product development at Flipkart need consolidation and a focused strategy so that competitors lose focus on price competition.”

Some experts say Walmart has bigger plans for Flipkart. “Flipkart is believed to have developed competencies in data analytics, artificial intelligence and supply chain which can be leveraged globally,” said Jeevan J. Arakal, associate professor at T.A. Pai Management Institute, Manipal. “The brand Flipkart itself has the potential to be scaled up globally. This investment, if managed properly, will be a great asset for a leader like Walmart and it will be a great generator of future cash flows.”

But, before that, Walmart will have to fill some gaps. Expert say there has been a lack of management depth at Flipkart. “I think Walmart has already begun the process of increasing the management bandwidth at Flipkart,” said Arakal.

Bansal resigned after a former employee made an allegation of sexual harassment against him. Many people think that the allegation was used by Walmart to ease out Bansal, as an internal investigation had found that there was no misconduct. Kris Lakshmikanth, founder of the executive search firm Head Hunters India, however, said Walmart did not have much of a choice. “With the MeToo movement having gained momentum globally, it was a no-brainer for them to take the decision,” he said. “If they had kept quiet, they would have been sued by shareholders. Besides, there was a possibility of a consumer boycott by women in India.”

Also, Bansal’s exit is unlikely to affect Flipkart’s operations. “Flipkart has been run for the past 15 months by its CEO Kalyan Krishnamurhty. He has done a fantastic job and ensured that Flipkart retains its market leadership position,” said Lakshmikanth.

Bansal and the other cofounder, Sachin Bansal, who quit when the deal with Walmart went through, have been the poster boys of Indian e-commerce. There have been concerns that their exit might affect the brand. “The brand has been stirred, but not shaken,” said Harish Bijoor, brand expert and founder of Harish Bijoor Consults. “Under the new Walmart dispensation, you can expect a fair bit of restructuring. People will change. Not the business verticals and processes. And that’s good for business in the medium-term.”

One big challenge before Walmart is making Flipkart a profit-making entity. “The profit discovery process is a journey Flipkart needs to begin if it is to be a sustainable business,” said Bijoor. “Walmart is quite experienced in this track in the space of physical retail. It needs to reinvent it for e-commerce.”

Another challenge is eliminating redundancy. Flipkart’s two big acquisitions—Myntra and Jabong—have left it with many duplicate positions. There have been reports that Walmart is planning to fire 200 employees of Jabong. “When the business is expanded inorganically, there are the issues of integrating employees, removing duplicates in the system and integrating all the consumer handling processes,” said Dr Satish Modh, director of VESIM Business School, Mumbai. “More than the restructuring of its personnel, the company need to focus on customer touch points and shopping experience.”

Walmart has not been a success in the e-commerce space anywhere in the world. Flipkart is probably its best chance. “The battle between Flipkart and Amazon will be a bloody one,” said Lakshmikanth. “There will be casualties. However, the market potential is so huge that they will continue to fight for the numero uno position. We can even expect Flipkart to enter new segments.”