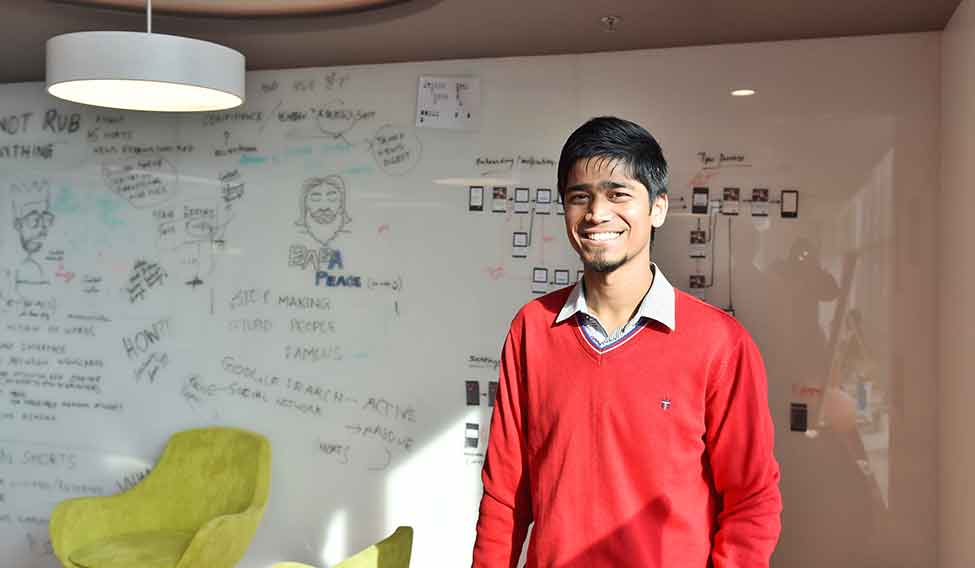 Short and sweet: Iqubal says that in the future, varied content like videos, TED talks and podcasts will be available on the platform | Aayush Goel

Azhar Iqubal, 23, cofounder of Inshorts, looks like a twelfth grader. It is hard to believe that this boyish-looking, casually dressed lad, who giggles intermittently while talking, is running his own startup. Despite his appearance, Iqubal has proved his business acumen by raising three rounds of funds from investors. In two years, Inshorts has acquired an enviable customer base. With 3 million downloads, it is one of Google’s top 50 apps in India. It has grown 30 times in the last year.

The startup caters to readers who are looking for information that need not be detailed. Iqubal categorises news readers into two types—active and passive. While active seekers are interested in getting information, passive seekers are the kind who will take a cursory glance at a news item before moving on to the next.

“Not everyone has the time or is interested in reading 500 to 800-word articles,” says Iqubal. “But they do want to scan the news in five minutes or less to know what is happening. Inshorts is meant for them.” The app compresses news stories into a 60-word format. For people who want to read a detailed report or know more about the story, there is a link at the end of every ‘short’.

The idea to start Inshorts came when Iqubal was studying in IIT Delhi. He found the students there didn’t know much about what was happening in the country. They were experts in their chosen subjects but were ignorant of what was happening in politics, defence and business. Newspapers, news websites and apps were cluttered with information that wasn’t organised into news that the students could consume quickly. They were confused about what to read and what not to. As a result, they would read the first two or three lines of a news article before moving on to the next. So why not offer sharp, crisp news that can be easily consumed by readers, especially youngsters? Iqubal claims that currently, only 37 per cent of smartphone users read news.

Iqubal and his friends Anunay Arunav and Deepit Purkayastha dropped out of IIT Delhi and Kharagpur in 2012 to start Inshorts. Persuading their parents to support their decision was not easy. “I told them that I would go back to IIT in a year’s time and finish my course if Inshorts didn’t succeed,” says Iqubal. “They were ok with this as they were sure the idea would fizzle out in a year.”

What started as a Facebook page in April 2013 has now grown into a company valued close to $100 million (approximately Rs665 crore). The page got thousands of ‘likes’ on Facebook in just two to three weeks. Then they started an Android app and applied to T-labs—an incubator and early stage seed fund for internet and mobile technology startups. T-labs incubated them and invested 010 lakh in the venture. The money ran out by April 2014. They were not able to pay the salaries of their two employees. They shot off mails to every person on their contact list requesting funds. Angel investors Gaurav Bhatnagar, Ankush Nijhawan and Manish Dhingra came to their aid.

“They showed a great deal of trust in us and signed a Rs30 lakh cheque the same day because we had immediate need of the money to pay our employees,” says Iqubal.

Then, Flipkart founders Sachin and Binny Bansal got on board and invested in the venture. It was a welcome surprise for Iqubal when he got a mail from Sachin one morning asking if he would like to meet up. Bansal had used Inshorts and liked it very much. Today, he is not just an investor but also an adviser to the startup. “Last year, we needed his help with something and he offered suggestions to solve the problem despite it being during Flipkart’s big billion day sale,” says Iqubal.

Inshorts raised $4 million (approximately Rs27 crore) in February 2015 in series A round of funding from Tiger Global, Rebright Partners and existing angels and series B of $20 million (approximately Rs133 crore) in July from Tiger Global. They have not monetised the platform yet as, currently, they are focusing on adding more users. However, they might consider an advertorial model in the future where ads are presented in the form of news with relevant disclosures. Inshorts hired nine people from IIT Delhi and three from IIT Kharagpur. The company now has 60 employees with half in technology and half in content.

Iqubal calls Inshorts a content distribution platform; it has tied up with ten media houses. “We are very clear that we do not want to produce content,” he says. “That is the core expertise of media companies. We want to tackle the problem of distribution through smart user interface and a great technology platform”. Soon, Inshorts will be a distributor of varied content in the form of videos, TED talks and podcasts.