Love in the time of Tinder

Tell us about your new book Laid in India, the protagonist of which is a ‘pickup artist’.

The easy answer? This book is a study of the shifting psyches of post-liberalisation Indian youth, how technology and living conditions have changed their worldviews from rural to urban, conservative to liberal – a dive into new India’s recent sociological past as told through this guy, Sid, a moral cul-de-sac who calls himself the ‘Number-One Pickup Artist’ in India. I wrote a feature for GQ about following him and watching him in action, which I thought would be a fun story that would make a few people laugh and that would be it. But the day after the story went live, the reaction was a bit overwhelming, and I realised how many layers about Indian society and culture existed within this man’s story.

How do you look at young urban Indians negotiating ideas of love, relationships and sex today? Could you contrast this with the situation in your home country Canada?

The big debate now is whether changing societal norms and all these ‘dating apps’ have compromised some medieval idea of goodness and morality. And for conservatives, that’s an easy stance to take. But one thing that’s universal about all the countries I’ve lived in – from Canada to Japan to Thailand to Holland – young people are going to do what young people do. Technology has just made it easier, so it seems like something new. But it is like thinking the world is falling apart because of all the violence you see on the news. It has always been there, but now you are seeing it all at once and you are scared so you freak out a little bit.

Indian homegrown dating apps are placing themselves in the middle – between the casual dating and traditional matrimonial space. How do you look at that?

There has been a need to market things like Tinder differently in India than in, say, the West, because of what I just said. As I mention in the book, my friend had written an article a few years ago about a pair of Americans who came to India to launch a dating site like they had back home, to offer the youth options other than the ones offered by the traditional matrimonial sites. But they failed. And in such a short time, apps like Tinder are growing faster in India than most other regions. What’s the difference? I think a lot of it has to do with privacy. And with the growth of ideas that seem out of line with traditional value structures, they will only become more common. And, well, watching the moral order of a bunch of old prudes get messed with is good fun.

There are divided opinions about dating apps such as Tinder fragmenting notions of relationships but, on the other hand, bringing down 'approach anxiety' and promoting greater gender mixing. Your comment?

Anything that forces so many urban Indian men to stop being such coddled, whiny man-boys who have never cooked or cleaned for themselves, or thought of the world through anything but their own list of needs, is a good thing. Does having potentially hundreds of people ready to date you affect your ability and desire to “settle down”? Maybe it does. And if that is the way someone wants to live, fair play to them. If that is not how you want to operate, don’t date that person. Easy. 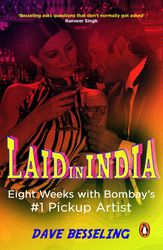 There have been debates about the idea of 'white privilege' on Tinder in India. Is that true?

It is very true. And I don’t say that lightly. Or just because I’m white. As you’ll see with “the Tinder chapter”, I spoke to dozens of women, on Tinder, about Tinder and about their views on Indian men and “white-swiping”. People think this is unfair, and that as a white guy, this is some kind of paradisical situation. Well, yes, it is pretty great to have been given a pass that most men don’t get. But there is also the fact that a lot of the women on Tinder were looking for a white guy just to have some fun with (completely fine), or as a way to make up for the fact that they got married young and have just been divorced in their early 30s and are looking to make up for lost experience (also completely fine). But in a lot of cases, whatever develops in a dating situation stops when it comes to meeting the girl’s family. So there is a sense of freedom there, but it stops short. Then you feel like you are being used.

What has been an outrageous experience in the writing of your book?

There wasn’t one situation that stuck out as the most outrageous, but the cumulative effect of meeting several women who have become Sid’s friend was a surprise. Models and actresses say he is such a nice guy, but the more I spoke to them, the more I suspected that they liked being Sid’s friend because it reminded them that they didn’t fall for his pickup game, and that gives them some kind of validation. It is a bit sad.