Bilateral amputee Malvika Iyer's doctoral thesis should be an eye-opener 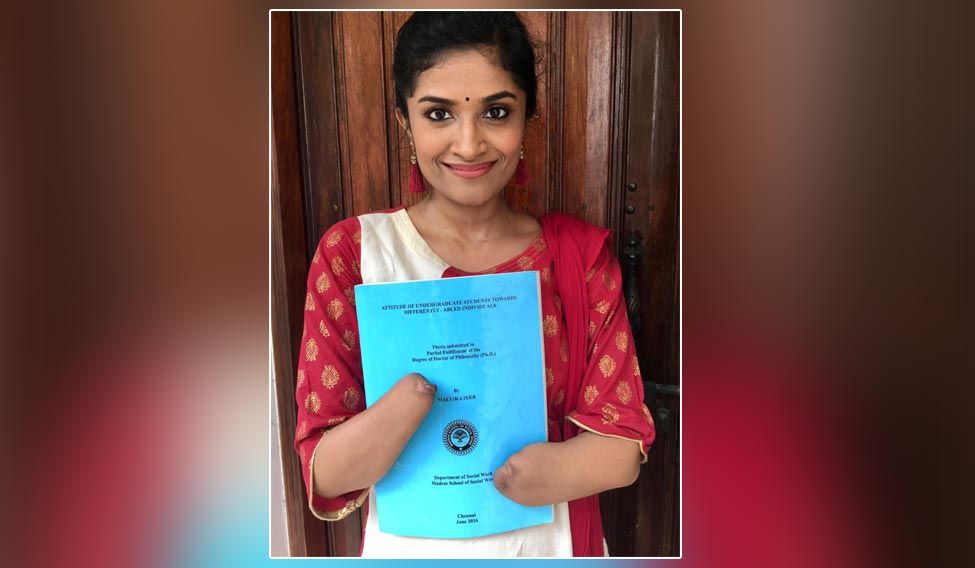 Malvika Iyer never complained to God while typing out her PhD thesis with a protruding bone in her amputated hand.

A bomb blast survivor, she chased her dream single mindedly. The challenges life threw at her only strengthened her resolve. “My legs were a little bit of hindrance for me. After the accident, my left foot was dangling from a small piece of skin and the leg was cut in half. I've loss of sensation in the remaining part of that leg, '' said the 28-year-old. “My right leg is also giving me problem now. I've terrible pain in my right leg because of nerve paralysis and I've to put balm on it every night. Because of all these, I found it so hard to move around while doing my PhD. Within minutes, my legs would start paining,'' she said. But not one to give up, she would take rest for a while and then continue to walk.

Iyer's Facebook post on having received the PhD has gone viral on social media. The story of the young girl who fought all odds to fulfil her dream has changed lives.

Iyer lost her hands at the age of 13, while mending her jeans with a hand grenade found in the neighbourhood which she thought was defused. Despite being bedridden for two years, she won a state rank for her class X boards among private candidates. A recipient of the 'Rolling Cup' for the best M. Phil thesis in 2012, she enrolled for her PhD at the Madras School of Social Work in Chennai in 2013.

People with disabilities face a lot of attitudinal problems, said Iyer. ''I myself have been a victim of this,'' she said. While living in the US, she would never wear her prosthetic hands. She didn't bring her hands when she came back to India in October. She soon realised it was a big mistake. “These two months I spent in India, I was horrified by the way people looked at me. I stopped stepping out of my home and going to public places for weeks,” she said. But over time, she managed to drag herself outside and stop worrying about what others think of her. “Disabled people face a lot of challenges. But it all comes down to attitudinal problems in the end,” she said.

Iyer has been advocating for changes in the school curriculam, aimed at creating a more inclusive society. She belives children can be the torchbearers of change. Co-chairing the World Economic Forum's India Economic Summit in October, Iyer spoke about Indian millenials and how they are going to be the change-makers. “I want every young man and woman in India to take up a cause and work for it. If all of us can do that, we can change the world,'' she said.

Iyer was invited to speak at the Youth Forum at the United Nations Headquarters in New York in March, which was like a dream come true for her. She received a standing ovation as she shared her personal story of challenges, successes and in betweens.

The accident was the turning point in her life. It has made her a different person,someone who is more accepting of things. Always smiling, Iyer is contentment personified.

Given a chance to undo something in your life, what would you choose, I ask her. “I'm not going to choose my accident. For some reason, I don't want to undo it,'' pat comes her reply. “I have a larger than life perspective because of the accident. I wouldn't want to give that up.”