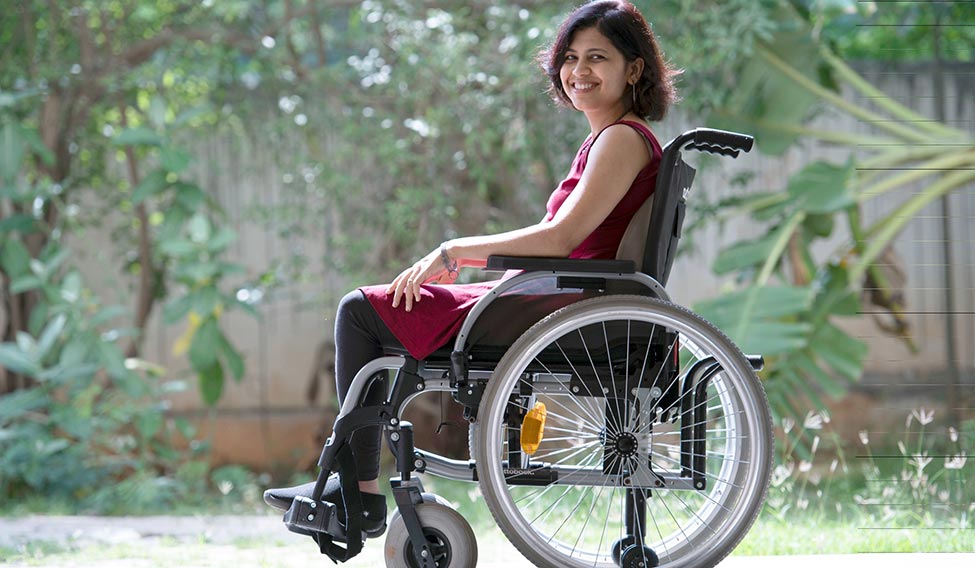 Crippled by multiple sclerosis, Swarnalatha is making her disability a source of inspiration

When she first held a walking stick, Swarna—as she is affectionately known—broke down in tears. Her husband, Guruprasad, comforted her, saying, “A person sometimes needs to wear glasses. Does that mean the person is blind?” Hearing his logic, she composed herself, and took small steps with the aid of the stick. A few years later, she broke down again, when her seven-year-old son, Gagan, told her that he was embarrassed by her disability. The following week, however, Gagan watched proudly as Swarna gave a motivational speech to a large audience and received a standing ovation.

Swarnalatha J., 36, has made a habit of rising high after each fall. Zipping around in her wheelchair, she helps and motivates people through the Swarga Foundation, a charitable trust, aimed at improving lives of the differently-abled. She encourages them to be positive and to walk the extra mile to succeed.

In 2009, Swarna and Guruprasad were based in Bengaluru. She was a jet-setting 29-year-old executive in a multinational car company, with a hectic work schedule that involved travelling across the country meeting politicians, cricketers and celebrities. One day, however, her life changed irreparably. She began running a fever, and took a paracetamol tablet to bring it down. She took leave from work and lay in bed, expecting the fever to subside. After a few hours, however, it only got worse, and she felt her body burning. She dragged herself out of bed and tried to walk, but her legs gave way and she fell to the floor. She picked herself up, holding on to the wall for support, but fell down again. “I didn’t know what was happening,” says Swarna. That evening, when Guruprasad got home from work, he rushed her to hospital. Over the next few days, however, the fever did not subside, and she lost sensation in her legs. After plenty of tests, she was diagnosed with multiple sclerosis (MS). Neither Swarna nor Guruprasad had heard of the debilitating disease.

When she was told that she would suffer from loss of mobility and would be unable to independently manage her life, Swarna was shattered. She lay in hospital for a prolonged period and was forced to resign from her job. Gagan was only two years old, and she could barely attend to him. Her professional and personal life lay in tatters. She went into a depression and constantly questioned why this had happened to her.

In 2011, Swarna gave birth to a baby girl, Gaana, after which she slowly came to terms with her disability. It dawned on her that she could not change her mental or physical state simply by wishing it away. She realised she could only alter her situation if she was positive and proactive.

The turning point came in 2012, when Guruprasad got a transfer to Coimbatore. The family moved into a beautiful two-bedroom apartment in the city, and Swarna began enjoying her new environment. Every evening, she looked forward to accompanying Gagan when he went swimming or cycling in the apartment complex. Soon, Swarna began organising cyclothons and puppet shows for residents in the building and for NGOs in the city. In October 2014, Swarna and Guruprasad formed Swarga; the name an amalgamation of Swarna, Guru, Gagan and Gaana. “Swarga means heaven,” says Swarna. “It is heaven for those affected by disability.”

Swarga’s mission is to improve the lives of individuals with multiple sclerosis and other neuromuscular disorders like paraplegia, muscular dystrophy and Parkinson’s disease. “I want to transform the general attitude in society towards differently-abled individuals,” says Swarna. “This transformation will increase empathy and improve access to opportunities that are currently inaccessible due to a lack of infrastructure and misinterpretations of disabilities among the general public.” Through the foundation, Swarna organises cyclothons and marathons, educates the public on disabilities and, together with government agencies, counsels and motivates those affected by them. “Swarga’s vision of an inclusive society is dependent on three fundamental requirements: improved accessibility, empathy from society, and comprehensive rehabilitation of individuals with neuromuscular disorders,” says Swarna. “Our intermediate project is the establishment of an integrated rehabilitation centre for neurological disorders that will offer the best of integrated medicine and clinical research.”

Recently, the foundation published a calendar featuring successful individuals who suffer from neurological disorders. Swarna designed the calendar and chose all the photographs herself. She wanted to show that disability can be overcome with confidence. Almost all of the 5000 calendars printed, were sold. She also helped design a new mobility vehicle called Sarathi, which enables a disabled person or senior citizen to travel in comfort. “It is a wheelchair-accessible van with a built-in restroom,” says Swarna. “The cabin is temperature-controlled and has a bed and three seats and can be hired from Swarga at a nominal rate.”

Swarna is an extremely popular motivational speaker in Coimbatore, and travels to other parts of the country too, inspiring others with her story. She encourages people to make the best of a bleak situation by being positive and staying determined to overcome it. “If I had continued to be an executive, I would have been doing the same monotonous job,” says Swarna. “I would not have learnt about life or met so many different people. My disease made me go the extra mile.”