Why am I a Hindu?

The obvious answer to this question is that it is because I was born one. Most people have little choice about the faith they grow up with: it was selected for them at birth, by the accident of geography and their parents’ cultural moorings. A majority of Hindus are born Hindu. A small handful, inspired by marriage, migration or philosophical conviction, have adopted the faith, usually by a process of ‘conversion’ unknown to most Hindus. Unlike that minority, I was born a Hindu, grew up as one and have considered myself one all my life.

But, what does being a Hindu mean? Many of us began having to interrogate ourselves in the late 1980s, when the world media began to speak and write of ‘Hindu fundamentalism’. This was odd, because we knew of Hinduism as a religion without fundamentals: no founder or prophet, no organised church, no compulsory beliefs or rites of worship, no uniform conception of the ‘good life’ and no single sacred book.

My Hinduism was a lived faith. It was a Hinduism of experience and upbringing, of observation and conversation, not one anchored in deep religious study (though, of course, they are not mutually exclusive). I knew few mantras, just a few snatches of a couple of hymns and practically no Sanskrit—my knowledge of Hindu sacred texts and philosophies came from reading them in English translation. So, writing a book called Why I Am a Hindu was not a task lightly undertaken.

I wrote it, nonetheless, for two main reasons. The first was to try and understand for myself, and for whoever else was interested, the extraordinary wisdom and virtues of the faith I have lived for over six decades—a faith that I have tried to absorb through beliefs and practices handed down to me by my father and others, my own observations and an extensive reading of the scriptures in translation and numerous scholarly treatises. The second reason was to show that the intolerant, and often violent, forms of Hindutva that began to impose themselves on the public consciousness of Indians in the 1980s went against the spirit of Hinduism—that most plural, inclusive, eclectic and expansive of faiths.

I relied on some of Hinduism’s greatest teachers and adepts to explain its essence. My narrative weaves between personal witness and an attentive reading of the relevant scriptures in translation, seeking to present both the ancient texts of Hinduism and the modern beliefs of Hindutva descriptively and on their own terms. I ask how we might free Hinduism from the excesses and perversions it has been subjected to, and restore it to its truest essence, which in many ways is that of an almost ideal faith for the twenty-first-century world. 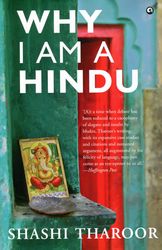 That may raise the question: Who is this “I” in my title? Is it the thoughtful Hindu layman, the product of a modern English-language education in contemporary India who is interrogating himself about the faith to which he claims adherence? Or, is it the politician steeped in the issues of the day, who is writing with a sense of urgency and despair, conditioned by the experience of being called ‘anti-Hindu’ by those who understand far less of the faith but are inflamed by their own ideological certitudes?

My claims about being Hindu are undoubtedly mediated by political contestations around the public expressions of Hinduism by those who see it as a badge of identity more than a system of transcendental beliefs. But, where I disagree with them, I do so not as a secularist standing outside the faith, but as a believing Hindu who seeks to challenge them from within the bounds of the religion.

Hinduism is uniquely difficult to encapsulate; the faith is almost Wikipedia-like in the authorial diversity of its scriptures and tenets. ‘Hinduism’ can stand for a civilisation as ‘Hellenism’ does, and also for a faith as ‘Judaism’ does. Political ideologues in the mid-twentieth century insisted it also stood for a ‘race’ of people embraced by its beliefs. But if, after reading my book, Hindu and non-Hindu alike come away with a new appreciation of the faith I cherish, and the challenges it is currently dealing with in contemporary India, Why I Am a Hindu would have served its purpose.