A diplomat friend of mine, returning home after less than three years’ service in India, was asked at his exit medical examination how many packs of cigarettes he smoked a day. When he protested that he was a staunch non-smoker, the doctor commented that X-rays of his lungs showed otherwise. But my friend had never lit up. All he had done, poor soul, was to breathe Delhi’s air, three smoggy winters in a row.

It really is that bad. The New York Times’ former India correspondent Gardiner Harris, in a famous article in 2015, explained that he was leaving his post prematurely because merely living in Delhi was damaging his children’s health. Describing the asthmatic travails of his eight-year-old son, Harris wrote that Delhi was “suffering from a dire paediatric respiratory crisis, with a recent study showing that nearly half of the city’s 4.4 million schoolchildren have irreversible lung damage from the poisonous air.” Harris felt that he and other expatriates were “pursuing our careers at our children’s expense”. He concluded that it was “unethical for those who have a choice to willingly raise children here”. So he picked up his kids and left India.

He had the choice; most Indians don’t. A study conducted by the Kolkata-based Chittaranjan National Cancer Institute (CNCI) of schoolchildren in Delhi between four and 17 years of age found that their key indicators of respiratory health and lung function were markedly worse than in their counterparts elsewhere. Indeed, the figures were twice to four times as bad for children in Delhi than in other places, and were not reversible. The villain is what the media often refer to as Delhi’s “killer dust”—respirable suspended particulate matter in the air, pollutants we inhale that become lodged in the lungs and affect our breathing. The number of premature deaths due to air pollution is rising. Poor air quality is now costing us at least 1 per cent of GDP every year in respiratory diseases, reduced productivity and increased hospitalisation. Indians may be losing three years of their lifespans because their lungs are affected by the bad air. 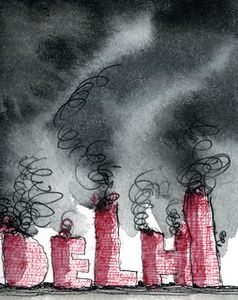 It’s not just Delhi’s cars, whose diesel fumes were targeted in the local government’s controversial, but largely successful, odd-even car scheme earlier this year, when citizens were only allowed to drive cars with odd numbered licence plates on odd days (like the 1st or 3rd of the month) and cars with even numbered licence plates on even days (like the 2nd or 4th of the month). Car and lorry exhausts are certainly among the villains, but so also are industrial factories spewing smoke, charcoal braziers on the sidewalks keeping pavement dwellers warm, coal stoves used by roadside chaiwallahs, and even the agricultural stubble burned by Punjabi and Haryanvi farmers next door. They all produce air pollutants that sweep into the capital city, with vehicular emissions adding to the dust that Mother Nature has already gifted Delhi in abundance. Delhi had just four “clean air days” in the whole of 2015—four out of 365! It’s worst, of course, in winter, when all this polluted air meets the winter fog and is trapped in it, giving Delhi’s smoke-ridden fog—smog—the greyish opacity that reduces visibility, delays flights and reduces the city’s traffic to an even more polluting crawl.

In my childhood, the satirical American songster Tom Lehrer sang a brilliant lyric about pollution that included the lines:

If you visit American city

You will find it very pretty;

Just two things of which you must beware:

Don’t drink the water and don’t breathe the air.

Replace “American city” with “Indian city” and you have a perfect song for our times. The World Health Organization says 13 of the world’s 20 most polluted cities and towns are in India. It’s time we demanded that our government did something about it.