One of the striking consequences of the vast size of India is that a cataclysm in one part of the country hardly resonates in another. To most Indians, the oddly-named Cyclone Ockhi was at best a curiosity, at worst a remote event to be clucked over. To the people of Thiruvananthapuram and Kanyakumari, it was a horrific tragedy that took some 300 lives (and, likely more, as final figures are added up).

As the MP for Thiruvananthapuram, I was a first-hand witness to the disaster and to the terrible toll it took on some of the poorest and most marginalised people in our country, the fishing community. I have been to the homes of the bereaved, tried to share their pain and grief, lit agarbattis and candles at makeshift shrines, mourned with them and vowed to do all I can to bring them help. For me, Ockhi was no distant headline.

Ockhi struck parts of Kerala, Tamil Nadu and Lakshadweep with winds reaching up to 165km an hour, causing immense damage to everything in its path. Its principal victims, however, were fishermen who had ventured out to sea, unaware of the grave danger to their lives—since no timely warning was issued and no cyclone alert had been pronounced by the Indian Meteorological Department until it was too late.

The government has focused largely on the urgent need to provide immediate relief to affected families, but there is also a need for a comprehensive review of the existing infrastructure and our readiness to address such natural disasters.

The initial rescue efforts were grossly inadequate. By the time the Coast Guard and the Indian Navy had summoned enough vessels into the area, it was too late to rescue those clinging for life to the wreckage. As fisherfolk desperately clamoured to be allowed to join the rescue efforts (since they knew where their confreres were likely to be), official search and rescue efforts saved only a few lives. When fishermen were finally allowed on board the rescue vessels, they guided them to areas where a number of floating bodies were spotted—but many were not picked up, since the naval ships had no facilities to accommodate corpses on board, and the ministry of defence was still “in the process of procuring” mobile mortuaries. 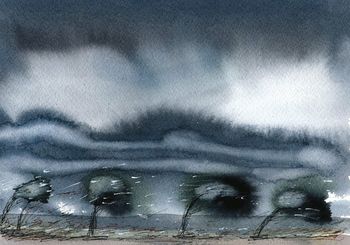 All of these issues point to the need for a detailed enquiry about the various aspects surrounding the disaster, whether Ockhi could have been foretold by better arrangements, such as association with international typhoon monitoring bodies; whether the relief operations and the overall management of this tragedy could have been improved; and whether the tip of the peninsula has enough search-and-rescue aircraft and vessels stationed there for future disasters. I have suggested we create the marine equivalent of our Territorial Army by training selected fisherfolk in search-and-rescue operations.

There is a need for urgent and immediate financial relief to all those affected. The cyclone has led to a complete shutdown of the regular ways of life in some of our coastal regions, and has caused severe emotional and economic distress for the fishing community. It is also worth asking whether it is fair to consign the fishing community to perpetual dependence on this profession. They venture farther and farther into the oceans, placing their lives at risk, because their traditional fishing grounds no longer give them enough to make a decent living. Members of this community do not have any alternate remunerative skills. Offering them skill development and vocational training courses in other fields would transform their lives for the better.

Ignoring the lessons of Ockhi is not OK. We cannot risk such an unmitigated disaster the next time a weather catastrophe strikes India.