Beware the perils of fatalism

The 70th anniversary of our independence is now behind us. A vast array of articles, op-eds, interviews and reminiscences have cluttered our newspapers, magazines and television screens. (I confess, without shame, that I have contributed several of them, to multiple outlets, on this momentous occasion.) As we return to the humdrum realities of normal life, what thoughts remain?

Beyond all the wisdom and all the pontificating, the learned political insights and the portentous evocations of history, I find myself thinking of what is happening to our country these days in the form of two parables.

The first is an old story, from our ancient Puranas.

A man, the quintessential Indian one might say, is pursued by a tiger. He runs fast, but his panting heart tells him he cannot run much longer or faster. He spots a tree. Relief! He accelerates and gets to it in one last despairing stride. He climbs the tree. The tiger snarls beneath him, but he feels he has escaped its snapping jaws. But no, what’s this? The branch on which he is sitting is weak, and bends dangerously. That is not all; wood-mice are gnawing away at it. Before long, they will eat through it and the branch will fall.

The man realises this and sees the tiger waiting below him. But as the branch bends, it sags over a well. Aha! Escape? Our hero looks hopefully into the well, but it is dry. Worse, there are poisonous snakes writhing and hissing on its bed, waiting for prey.

What is our hero to do? As the branch bends, he perceives a solitary blade of grass growing on the wall of the well. On the tip of the blade gleams a drop of honey.

What action does our Puranic man, the archetypal Indian, take in this situation?

He bends with the branch, and licks up the honey.

This story is at least 2,000 years old, but it could be told today. It speaks of what the Orientalists saw as Indian fatalism, our self-absorption in the face of impossible circumstances, and our willingness to make the best we can out of those circumstances.

That is the Indian answer to the insuperable difficulty. One does not fight against that which one cannot overcome, but seeks instead to find the best way, for oneself, to live with it.

So your life is messed up by demonetisation, you spend hours in bank queues, your elderly neighbour collapses and dies while waiting for his pension money, no one can change the 2,000-rupee note you are stuck with, and your wife’s life-savings in an atta tin cannot be encashed because you can’t prove it isn’t black money—but you console yourself, saying the rich have it worse. You find comfort in the belief that since the prime minister is a bachelor, his only thought is to serve the country, and he could not possibly be doing any of this for selfish purposes. In any case, what can you do about it? You may as well adjust to what you can’t change. 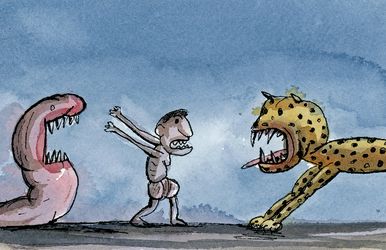 You voted for Modi hoping to get good governance, an efficient chief executive, strong economic growth and a multiplicity of jobs to choose from—but you got unemployment, lower growth, 120-rupee tomatoes and cow vigilantes lynching poor Muslims and dalits. You ask yourself, “What’s the alternative?” It wasn’t what you voted for, but it’s what you are saddled with. At least the PM makes great speeches. You may as well lick up that drop of honey.

The second parable is more troubling. It’s a modern one. If you throw a live frog into a pan of boiling water, it will leap out, scalded, and scurry to safety. But if you put a live frog in a pan of tepid water, and gradually turn up the temperature, it will keep adjusting to the heat until it is cooked to death.

I hope and pray that is not what is happening to my fellow Indians. Are we accepting each new sign of our new political reality like that Puranic man, and adjusting ourselves to it till the last spark of life is snuffed out of us like the frog’s?