The other day I saw the picture of a lovely rath in a British Museum catalogue for an exhibition called Living With Gods. It’s a beautiful, elaborately carved wooden vehicle used for a sanctified purpose—to wheel an image of a deity worshipped by millions to a temple in full public view—but it has given its name to an awful English word, “juggernaut”. The word is a colonial mangling of Jagannath (Sanskrit for “Lord of the World”), a manifestation of God Krishna. Legend has it that in ancient times, King Indradyumna chanced upon the corpse of Lord Krishna, who had been slain by a hunter, and was informed by the god Vishnu that he should make a wooden statue of the Lord and inter His bones in it. The great sage Vishwakarma, the architect of the gods, undertook the task on condition that he not be disturbed while carving the statue. When, after 15 days, the impatient king went to inquire about the progress of the sculpture, the irritated sage abandoned it unfinished, without hands or feet. King Indradyumna prayed to Brahma, the creator, who breathed life into the statue by giving it eyes and a soul, though He could do nothing about the stumps where the deity’s limbs should have been. This consecrated statue is worshipped at the Jagannath Temple in Puri, in the eastern state of Odisha.

The legend almost certainly masks a different story. As Hinduism spread through the subcontinent, it absorbed local animist and tribal faiths it encountered, by accommodating their images of worship into the Hindu pantheon. Jagannath was probably a tribal god who was reimagined, through this legend, as a manifestation of Krishna (himself an incarnation of Vishnu), his somewhat rough and limbless appearance explained through an elaborate story that fits within Hindu lore. 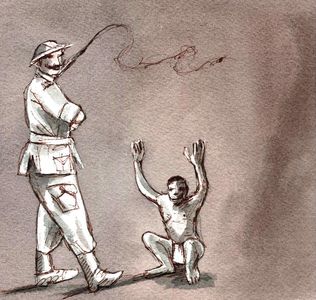 One of the ways of achieving the new deity’s acceptance by the people was by parading Him four times a year in elaborate yatras on land and water, of which the most famous is the ratha-yatra, or chariot procession, in the Hindu month of Ashadha. This is when the idol is wheeled to the temple in an enormous chariot as devotees line the streets in a frenzy, hailing the Lord with chants and prayers and craning their necks for a glimpse of the deity seated in the chariot, followed by lesser chariots bearing statues of his brother Balarama and sister Subhadra.

How did the deity transported in this devotional procession become transmogrified into an English term for a relentless, remorseless, unstoppable force that destroys anything in its path?

Orientalism began early, alas: four centuries before the British conquest of India began, falsely distorted tales about India were propagated in the 14th-century travelogue of Sir John Mandeville, who described the festival in his Travels and depicted Hindus throwing themselves under the wheels of the enormous Jagannath chariots as a religious sacrifice and being crushed to death. Hinduism, in fact, has no concept of such human sacrifice; if Sir John really saw a Hindu killed under the wheels of a chariot, it can only be because a poor devotee stumbled and fell accidentally upon the path in the tumult and the enormous chariot could not easily stop or turn on the narrow road.

Still, the tale, the false image of the faith it portrayed, and the unfortunate associations of the word persisted. By the 18th century “juggernaut” was in common use as a synonym for an irresistible and destructive force that demands total devotion or unforgiving sacrifice—the sense in which it pops up in the novels of Charlotte Bronte and Charles Dickens, and even Robert Louis Stevenson, who applied it to Dr Jekyll’s foil, Mr Hyde.

It was only Mark Twain, in his autobiography, who described Juggernaut as the kindest of gods; and a look at the lovely object in the British Museum’s collection shows you why—for such an exquisite piece of art would only have been used to transport a figure of reverence, not of fear. But alas, by then the damage had been done.