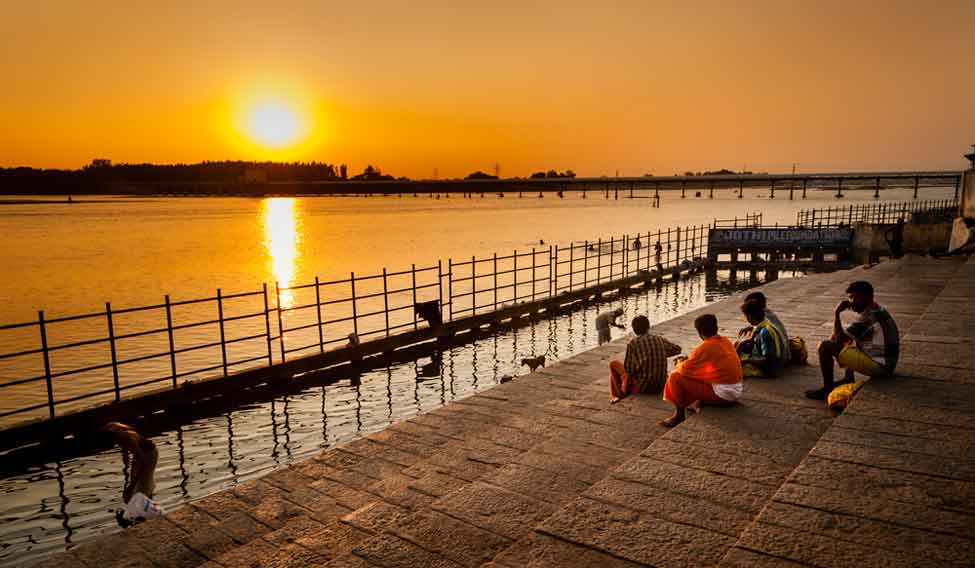 We are who we are, because of our rivers. India has essentially grown along the banks of major rivers. Our earliest civilisations like Mohenjo-Daro and Harappa were born along the waters, and they died when the rivers shifted course.

Today, our rivers are depleting by 8% every year; this means all our rivers will be seasonal in 20 years. In the last 10 to 12 years, I have seen a dozen rivers going dry in Tamil Nadu alone. The waters of the Kaveri, the Krishna and the Godavari, the most significant rivers of southern India, flow to the oceans only for a few months in a year. We cannot immediately restore our ice-fed rivers because the volume of ice and snowfall are global phenomena, but we can certainly breathe life into these southern rivers and others which are forest-fed.

The global warming results in excess rain, and the coastal regions of Andhra Pradesh is mostly under water. Recently, after two days of rain in Chennai, rescue boats were on alert; we are now afraid of the rain. Naturally, the southern peninsula will receive excess rainfall if the temperature goes up. And with oceans on both sides, excess rains will turn the land into desert much faster than no rain. It will leach the land and make it totally improper for cultivation over a period of time which is already happening very rapidly in Tamil Nadu. Bore wells that used to hit water at two hundred feet are being dug to 1,000 feet, and still there is no water.

How long are we going to run the country with water trains and trucks? It is not possible to feed the thirst of this country with trains or pipelines. I don’t want to be alarmist, but everyone should think about the real problems we are creating with our treatment of the rivers. With more than 1 billion people, if rivers dry up, what will people do? Can they kill each other and drink blood?

People want emergency solutions and are trying to move the policy-makers to try to connect the rivers and deliver water to more areas of land. That is going to be even more disastrous. We will only spend enormous amounts of money and create an even bigger ecological disaster. What is needed is a broader solution which starts by creating an awareness about what we are doing to the rivers and what we can do instead. Inspiring people to take action will not work; only if we offer profitable solutions can we convince people to save our rivers. We can employ 1,00,000 people to plant trees and nurture them for the next ten years and bring an enormous amount of land under green cover. In this way we will invite the monsoons to come regularly. We can stop poisoning our rivers. This is the only comprehensive solution which will not cost more than 10% of the cost of linking rivers.

Farmers are ploughing up the banks; fertilizers and pesticides seep into water, affecting life. For one kilometre along either side of the river banks, let us not do agriculture or allow ploughing. We need to create a plant buffer for our rivers. For land belonging to the government, plan for afforestation, and for private land, horticulture. The governments can provide education, and subsidise these efforts for three to five years, and help develop a whole new system of high quality organic horticulture. Farmers will not mind giving up their regular crops, nor will they be coerced to migrate to cities for other work because their land will still continue to yield a living, even better than what they had before.

Governments have to create river-friendly policies. Governments of Andhra Pradesh and Madhya Pradesh are taking initiatives in this direction. Right now we are making a project proposal to present to the government of India, as to how this method of farming is more profitable than agriculture.

Today we have a totally defeated population because they believe nothing will change, irrespective of what they do. Now is the time to make a change; 10 years will be too late. In our economic lust, let us not forget that it is our land and our rivers that sustain us. Our rivers have been on for millions of years; let our generation not kill them. If each one of us plant one tree this year, nourish it for two years, and after two years we plant one more tree, we have a phenomenal movement going. It is not a question of whether we can do it or not. Do we want to do it or not?—is the only question. Let us make it happen.