When Sikkim fell into the map

Sikkim is a place of heavenly peace in the Himalayas, but getting there is hell. It is the only state that is neither rail-linked nor air-linked to the rest of India. The nearest airport is 125km away in Bagdogra in West Bengal. VIPs are heli-lifted from there to Gangtok if the weather is fine. Lesser mortals drive 125km through National Highway 10, the only road that connects Sikkim to the rest of India. Most of the time the road is choked with traffic, or blocked by Gorkhaland agitationists.

There is good news. Sikkim will get its first airport this month at Pakyong near Gangtok. It will be the first greenfield airport in the northeast and, at 4,700 feet, will be one of the five highest in India. Chief Minister Pawan Kumar Chamling has asked Prime Minister Narendra Modi to inaugurate it. Happy landing, gentlemen! 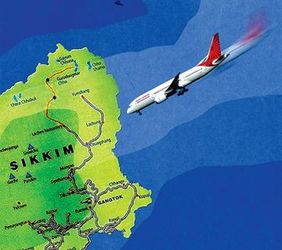 Indira is acclaimed for several of her nation-building feats—winning the 1971 war, the peaceful bomb test in 1974, the Green Revolution, the Antarctic mission, the space programme, the missile programme, electronics programmes, renewable energy programmes and more. She is also accused of a few faults—the Emergency, her dynasticism, the Punjab goof-up, the Assam crisis, attempts at court-packing and more.

But the ‘annexation’ of Sikkim is the one strategic masterstroke for which she is yet to get her due. It is also perhaps the only instance of accretion of territory to free India, after Sardar Patel’s integration of the states and Nehru’s annexation of French and Portuguese enclaves.

Patel, whom we are now honouring with a partly-made-in-China statue, had strung together most of the princely states before his untimely death in 1950. The Himalayan kingdoms of Nepal, Bhutan and Sikkim, which had been British-protected buffers against Chinese-protected Tibet, now became Indian-protected buffers.

The rest of the territorial tailoring was done by Nehru. At a time when West European powers were still dictating terms in world bodies, Nehru kicked out the French (peacefully) and the Portuguese (violently) from Puducherry, Goa and their other exclaves in the subcontinent, and integrated those territories to the Indian Union.

Meanwhile, we were also losing land. We had lost a third of Kashmir to Pakistan in the 1947-48 war, and a chunk of Aksai Chin to the Chinese in 1962. Indira had to cede Katchatheevu to Sri Lanka in a diplomatic deal, and Modi had to swap exclaves and enclaves with Bangladesh.

The 1962 defeat and the concerns expressed by her generals in 1971 about possible Chinese intervention in their war had made her realise that the Chinese could walk across any time when there was no snow. (One reason why Sam Manekshaw told her that he would have his war in winter was that the Chinese wouldn’t poke their nose in.)

Indira spotted her chance when political unrest broke out in Sikkim over the misdeeds of the king’s American wife. Unlike Nepal and Bhutan, Sikkim had been a member of British India’s Chamber of Princes, which meant it had been at par with the Indian princely states that had acceded in the 1940s. Indira made use of this to quietly nudge a democracy movement in Sikkim that ended in the abolition of kingship and conduct of a referendum.