Sultan at the crossroads

Mao Zedong once denounced Genghis Khan as another barbarian warlord, but Xi Jinping seems to have illusions of being a modern-day Genghis.

In the 13th century Genghis overran the landmass of Eurasia from the Pacific coast to almost the shores of the Atlantic, and built the largest contiguous empire in world history. He “built roads, bridges, and ferries, as well as new towns to act as supply depots,” as Jeffrey E. Garten wrote in his recently published From Silk to Silicon: The Story of Globalization Through Ten Extraordinary Lives. Garten says Genghis was the world's first globaliser.

Garten believes that China, under Xi, is doing much the same—“building connections to Europe via the Persian Gulf and also through South Asia” by “expansion of trade and... construction of oil and gas pipelines, ports and transnational highways.” On a tour of central Asia in 2013, Xi invoked the memory of Genghis, saying, “I can almost hear the ring of the camel bells and [smell] the wisps of smoke in the desert.” In 2015 “he did more than romanticise about the past; he committed to inject $62 billion into three of China's state-owned banks to finance a New Silk Road over land and over the oceans, the two being combined in a policy the Chinese call 'One Belt One Road'”.

Garten is no historian. He has overlooked the fact that Genghis's empire didn't envelop India, which was then ruled by the illustrious Iltumish, the first truly sovereign sultan of Delhi. (Iltumish had snapped his links with his Afghan suzerains, and with the Caliph of Baghdad.) When Genghis came knocking at the gates of India, Iltumish, through diplomacy and tact, and without shooting a single arrow, saved India from being sucked into the empire of the marauding Mongols. 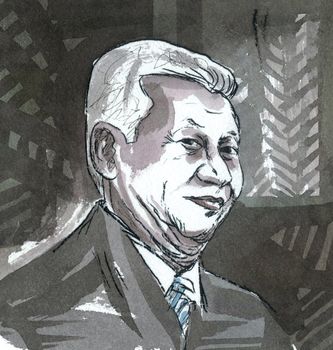 Narendra Modi fans may not like him being likened to a sultan, but the prime minister appears to be playing Iltumish to Xi's Genghis. Xi has called a grand durbar over the OBOR next week in Beijing. There he will have close to 30 presidents and prime ministers in attendance, including Joko Widodo of Indonesia, Rodrigo Duterte of the Philippines, Najib Razak of Malaysia, Nawaz Sharif of Pakistan, Ranil Wickremesinghe of Sri Lanka, and even the mighty Vladimir Putin of Russia. Narendra Modi won't be there.

Modi's boycott of the belt, too, has much to do with his ideas of sovereignty. One of the extended arms of Xi's OBOR will be the China-Pakistan Economic Corridor, a network of roads, rail lines, pipelines and industrial complexes that will pass through Pakistan-occupied Kashmir and Gilgit-Baltistan. India joining the OBOR economic empire, Modi thinks, will be tantamount to India recognising Pakistan's illegal occupation of those territories. “Only by respecting the sovereignty of the countries involved, can regional connectivity corridors fulfil their promise and avoid differences and discord,” Modi said at the Raisina Dialogue a few months ago.

The grandstanding is fine, but the worry is that India might get left out of a new Eurasian Eldorado that is being built, much like the Central Europeans missed the Marshall Plan mannas after the last World War. Virtually the entire Eurasia, from the mighty Russia to midget Nepal (minus India and Japan), are joining the OBOR bandwagon.

Delhi's rajgurus have proffered two face-savers. One, tell Xi to delink CPEC from OBOR and then join it. Two, get Xi to rechristen the CPEC as South Asia Economic Corridor and then join the beltway waltz. For all you know, Xi might agree to either. He wants India, his only rival in Asia, in at any price.

But if you ask me, these face-savers only feed on our vainglory. What then is the option? Simple! Dream big like Xi. Plan our own belts and roads, and take our neighbours on test drives. They will join the ride.