The Queen of the Arabian Sea is waiting for Narendra Modi with her new necklace. I am talking of Kochi, and her necklace-like metro line.

The Kochi Metro, built in the shortest time, is ready. Now the commuters, the communists and the Congressmen, are waiting for Modi to open it. The state government fixed May 30. That’s taking the PM for a ride, cried BJP men, a physically and politically endangered species in Kerala. The PM will be in Europe on the day, they said. Let him be; time, tide and train wait for none, retorted the state’s tourism minister.

That created a storm—not just in the teacup, but in the state’s much-encroached tea estates, too. Finally, Pinarayi Vijayan calmed them down. The train will wait for Modi, the CM said.

Modi is bitten by a ‘love bug’ for the metro; he ‘rides again’ and again. He has been spotted in Delhi Metro half a dozen times, taking the French president to Gurgaon once, and the Australian PM to Akshardham last month. He has also been tracking all metro projects through his PRAGATI (pro-active governance and timely implementation), and is pretty happy with the way the Kochi Metro has been built.

Metros, which the British call the Underground or the Tube, are the safest and fastest means of town transport, though not the cheapest. India is a late rider. The British built London’s in the 19th century; a hundred cities across the world built theirs in the 20th century. All Indian metros, save Kolkata’s, are 21st century systems. 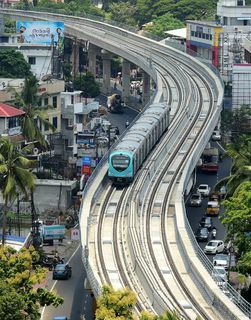 Many security wizards claim that the 1998 nuclear tests sent India burrowing. The National Security Council felt that a bomb-armed country should also have a bomb-shelter, at least to move the nuclear button-holders, including the PM. Thus was born the idea of an underground line in Delhi. The Moscow Metro, the world’s grandest, was born partly out of Stalin’s idea of building bomb shelters. When the Germans bombarded Moscow, thousands of its citizens took shelter in them, as had more than 1,50,000 Londoners every night during the Battle of Britain air raids. The Pyongyang Metro, said to be the deepest today, is also meant as a bomb shelter.

Indian metros, except a couple of Delhi lines, are all overground. Manmohan Singh’s 2006 urban transport policy proposed that every city with more than 2 million people can have a metro. Modi gave a further boost when his town development minister Venkaiah Naidu offered Central funds to all cities with million-plus people to build metros. On his government’s first anniversary, Modi agreed to Naidu’s proposal to build metros in 50 cities, the cost shared 50-50 between the Centre and the state.

Of late there has been a rethink. Since capital costs are high, the Centre has asked states to explore other means of rapid mass transport, and build metros only as a last resort. The latest thinking is that cities need integrated transport systems—and not depend on one.

TAILPIECE: SHERLOCK HOLMES stories are set in London, and Baker Street, where Holmes lived, is an iconic station. There are mentions of several stations in the stories; and Holmes and Watson often take trains out of London. But, Shashi Verma, Transport for London’s customer experience chief, told me that only in one story did Watson claim to have actually travelled by the Underground with Holmes. In The Red-Headed League, “we travelled by the Underground as far as Aldersgate.” In The Adventure of the Bruce-Partington Plans, a body is found having fallen off a train rake near Aldgate station.