History through the looking glass

The brouhaha over Padmavati is turning out to be absurd like Alice’s Adventures in Wonderland, and her passage Through the Looking Glass.

Like the Queen in Wonderland, the Rajputs are crying “off with his head” at Sanjay Bhansali, and “off with her nose” at Deepika Padukone. And they want the PM to decide whether Alauddin Khilji saw the fair Padmavati through a looking glass.

History is much about heads that rolled. Other parts of the anatomy have figured, but rarely. Sanga of Chittor lived minus several limbs (he lost them in battles); he was called “fragment of a soldier”. An ear—Captain Jenkin’s— caused a war between England and Spain. The nose rarely made history. Save Cleopatra’s, Surpanakha’s, now Deepika’s.

Modi has kept himself off the matter. Wisely. For, neither the filmmaker who stands to lose his head nor the Rajput groups who have lost their heads have any case. They are squabbling over what historians think are two sides of a false story, which THE WEEK had once featured as one of ten greatest myths of Indian history.

It is true that Alauddin sacked Chittor in 1303, put 13,000 Hindus to death, and returned to Delhi, leaving the fief with his weak son Khizr Khan. This has been recorded by contemporary writer Ziauddin Barani, and by the sage Amir Khusrau who accompanied Khilji on the expedition. Neither of them has mentioned any Padmini or Padmavati having been the reason for the sack, or there having taken place a jauhar. The sack of Chittor was another of the sultan’s several conquests aimed at amassing territory and wealth.

The Padmavati legend figured first in the 15th century, in Sufi bard Mohammad Jayasi’s poem Padmavat, as a tale of romance between Ratnasen of Chittor and Padmavati, a princess of Singhaldip (now Sri Lanka)! Ratnasen marries her with the help of Siva and Parvati, and brings her to Chittor. Alauddin hears of her beauty and covets her, and tricks Ratnasen into captivity. Padmavati sends two warriors who rescue him. Meanwhile, another Hindu king covets her; Ratnasen goes to war with him; they slay each other. The Khilji, spotting his chance, marches on Chittor. The defenceless queen and her maids commit jauhar.

Since then, bards and historians (Ferishta and Hajji-ad-Dabir, for example) have been giving varying versions of the tale. In one, her Rajput kin plot to poison her, thinking she is going to join the Khilji harem.

The tale got into currency after James Tod recorded it in his Annals and Antiquities of Rajasthan. Rajputs endorsed his account, because Tod extolled their valour and chastity. Only now do they think the mirror story reflects badly on their women.

Other historians have dismissed the tale as fiction. Tod’s editor William Cooke, and A.F. Pinhey who was resident in Mewar, took Tod’s tales with ounces of salt. So have modern historians—Satish Chandra, G.S. Ojha, for example. 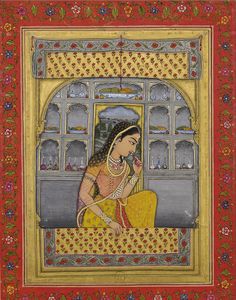 The most plausible explanation has been Wolseley Haig’s. Based on Ferishta, he says Alauddin took Ratan to Delhi and kept him captive for a year, and asked for his fair wife as a price for liberty. Padmavati sent swordsmen, disguised as herself and maids, in litters to Delhi. They rescued Ratan and took him to the hills. An enraged Alauddin dismissed his pleasure-seeker son Khizr, and appointed Ratan’s nephew Arsi as viceroy in Chittor. Soon the Rajput chiefs deserted Ratan, who had forfeited their respect, and joined Arsi who ruled as Alauddin’s vassal.

This interpretation, historically sound, explains why Khusrau and others were silent on the Padmavati incident. It did not happen when Alauddin was besieging the fort. If at all, it happened later.

To that extent, the Rajputs are right. Padmavati didn’t show her face to Alauddin—through the looking glass or otherwise.