With UPA chairperson Sonia Gandhi making fleeting statements and calling suspension of her party’s 25 MPs “black day for democracy” and “murder of democracy”, I thought it would help if we delve a bit into how well the Congress upheld India’s democratic traditions in the majority period it ruled and just how many times our democratic fervour was compromised for very personal and private ambitions.

The first incident that comes to mind is the unnecessary and suppressive declaration of the 21-month-long Emergency, suspending elections and curbing civil liberties, for safeguarding private control over power and for continuing Congress rule over India in spite of the law and courts opining and deciding otherwise. The obvious second, and related, infringement of democratic principles was imprisonment of all detractors and political opponents, forced mass sterilisation and press censorship. I would call this not murdering but slaughtering of the democratic fabric of our nation.

And wasn’t it murder of our democracy when the UPA went on a rampant loot, ripping the nation of its resources and revenues to fill their private coffers in the recent ten years of their rule?

Maybe the ultimate democratic act of the Congress was Rahul Gandhi tearing apart the infamous ordinance on convicted lawmakers in a press conference, thereby rejecting a decision taken by his own party’s government. 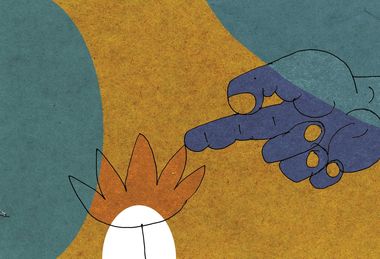 Or, perhaps, what the Congress, its first family and their numerous sycophantic followers do believe to be upholding ‘democracy’ is a ‘my way or the highway policy’ practised by them on many occasions in the past. That their legislator Shashi Tharoor’s views on suspension have changed today and are contrary to what he opined when the BJP was in opposition and seeking answers to a CAG report on dubious coal block allocations and resultant losses to the exchequer is proof of the Congress double-speak on the issue.

Of course the Congress does not have a leg to stand on when one considers their actions in suspending 18 MPs from Andhra Pradesh in February 2014 and around 60 MPs during the tenure of Rajiv Gandhi.

The most valid and interesting difference between the protests of the two coalitions, between then and now, is that then the BJP protested as it wanted a debate on various issues of corruption and bills, a serious discussion on matters of importance directly affecting the lives of millions of Indians, but the UPA wanted to muzzle these alternative voices lest the adverse play of these bills reached the common man enlightening them of the UPA’s often hidden agendas in pushing of certain laws in Parliament. But now, the Congress and its cohorts want no debate and no discussion over any bill, and oppose and disrupt parliamentary proceedings just for opposing. Perhaps they are scared that both Vyapam and Lalit Modi issues actually happened during the Congress rule. Nothing explains their unwillingness to listen, reason or debate better than their own hidden skeletons.

The intransigence of the Congress led to the real murder of democracy in the very public spectacle of the Bhutanese delegation witnessing the true colours of the Congress upholding “democratic tradition” in the Rajya Sabha on August 10. Need one say more!