A vote against jungle raj

London, 2010. A party colleague, the very person who was instrumental in my foray into politics, wakes me up around 5 in the morning. “Nupur, you can’t even imagine how pichhda (underdeveloped) rural Bihar is,” he laments. Hailing from Haryana and helping in the assembly election at Arwal constituency, he painted a sorry picture of how we, as a country, had completely ignored and failed Bihar on various counts.

Cut to 2015. I find myself staring at the same picture. The situation in Bihar remains the same, except for slight improvements vis-a-vis electricity, roads and toilets in all houses—development largely attributed to the determination of BJP legislators.

Arwal, located in central Bihar, is one of the worst Naxal-affected areas in the region. It was one among 32 constituencies that went to the polls in the second phase of the assembly elections. The BJP contested 16 of those seats.

Arwal is made up of approximately 345 villages and adjacent bighas (land that houses a caste different from the one predominant in a particular village). Like perhaps in many other rural constituencies in the state, the votes in Arwal go where the men or the head of families wishes them to. And, more often than not, they go along the lines of caste.

That the BJP’s sitting MLA was shot at merely two days after he bagged the ticket again this year is not a shocker. Chitranjan Kumar has been in the vanguard of the movement against Maoist excesses against dalits. What is pleasantly surprising, however, is that the section we like to refer to as ‘dalits’ and ‘mahadalits’ are fearlessly coming out in large numbers to cast their votes.

Their only concern? Development and a life sans terror. 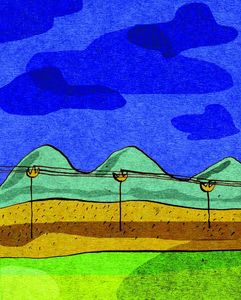 No, this ‘terror’ they are worried about is not the same as the continuous fear of Maoist violence, but the one they claim Lalu Prasad’s Rashtriya Janata Dal was notoriously known for when it was in power for around 14 years. The populace of Bihar, both rural and urban, openly refer it to as “jungle raj”. They feel deceived, if not angry, at the formation of the Grand Alliance, wherein Nitish Kumar’s Janata Dal (United) joined hands with Lalu’s RJD and the Congress for the ongoing assembly polls.

For all the good work done by the JD(U)-BJP alliance of the past, and for all the ‘apparent’ goodwill (if any) earned thereof by Nitish, if the Bihari voter feels cheated today, it is because of the obvious opportunity handed over on a platter to a party led by a politician disallowed to contest any election himself and the probable threat of the silent control that he may enjoy over the fortunes of Bihar.

If my assessment from my groundwork is correct, in the minds of an average Bihari, there are strong anti-incumbency feelings against the JD(U), and its very uncomfortable coalition with the scam-ridden Congress, the misrule-monger RJD and the self-proclaimed ‘beacon-of-honesty’ Arvind Kejriwal and his Aam Aadmi Party is a recipe for a disaster waiting to unravel itself, if elected. Adding to that are opinions flying across the electorate on how the standalone JD(U) government fared and Nitish got embroiled in a multi-crore drug scam.

If the voting trends are anything to go by, the maximum support to the BJP led-National Democratic Alliance is coming from unexpected quarters. And that is an advantage.

A Bihari adage is that even a school-going teenager is politically astute. Nothing could be truer.