The power of the written word

It has been close to eight years since I began writing in THE WEEK. Month after month, writing the column was the only regularity in my life. The deadline always came too soon and every time I would promise myself not to write at the 11th hour. But I always did, including this one! Except for one short hiatus I took in late 2010 when my son was born, I was disciplined and relentless.

Now no more deadlines, no dilemmas about what to write and no distractions from what I have now dived into. Yet, I am sad to let it go. It has not only been cathartic for me, but also helped me think, feel and express in ways I hadn’t before. I remember the day when I was first approached to write. I had only written the odd blog and my first film, Firaaq. They didn’t qualify me to become a columnist overnight, a person who must have the habit of systematically writing.

The bug of trying out new things and getting an opportunity to share was tempting. My random musings had found a method. Many concerns, questions, frustrations and inspirations found a voice, a channel. My faith in the redemptive power of sharing stories was strengthened, and I also realised the contemplative power of writing.

Often I sat down to write a fun piece, though invariably there was something more pressing, more urgent, that I wanted to share. And before I knew it, something serious would slip into the column, nudging my funny bone to the next, which just never happened. Writing has been a mirror to my instincts—all that disturbed and anguished me but also that filled me with joy and wonder. I was happy to bare myself. For that, I often got trolled and, at times, got stopped on the street with a big smile. 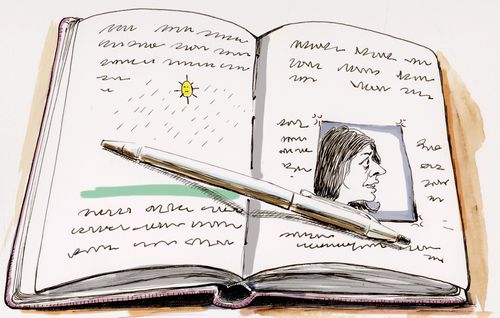 I am grateful to the editor for giving me the brief, “You can write anything under the sun”, and I heeded to it fully! From exploring the complexity of the human mind to politics of our times, I had a free hand. I used the opportunity to voice the concerns of the under-privileged and the marginalised. I reminisced the time I participated, 25 years ago, in a march by farmers and tribals who were protesting against the Narmada dam. I often wrote about the multiple struggles of women, the desire to reclaim words like secularism, the dilemma of being a true liberal and the responsibility of raising a boy in an acutely patriarchal society.

I shared the journey of writing Between the Lines, a play that explores the not-so-subtle gender inequalities in the educated class; what it was to unlearn learning; how by default I became the face of ‘Dark is Beautiful’ campaign and why the red carpet was the least interesting part of being on the jury at the Cannes Film Festival. All this and more were streams of consciousness meandering through my thoughts, feelings and questions. I have mused about the need to go beyond the simple binaries of identity and tried to understand the rise of Trump and the Modi phenomenon. Writing forced me to look at data to back my intuitions and test my positions on subjects that piqued my interest.

As I turn this last page on the Last Word, I begin a new journey. It will be cameras and lights, sounds and performances, all in the service of telling a story that I so believe must be told. The power of the written word remains as the film I am directing is about the life and works of one of the subcontinent's greatest short-story writers, Sadaat Hasan Manto.

A continuum of sorts. The medium will change but neither the intent nor the desire to share will be any different. Martin Luther King Jr. said, "Our lives begin to end the day we become silent about things that matter." And this will be my last word!