The ant in the ear of the elephant

Twenty-five years ago, I walked with thousands of farmers, tribals and activists in a five-week Sangharsh Yatra. The solidarity march was in the states along the Narmada valley from Madhya Pradesh to the Sardar Sarovar Dam site in Gujarat. Led by Baba Amte and Medha Patkar, it demanded more participation of the people in the decisions about the dam. After all, it was their farmlands that were getting submerged, and they were the ones getting displaced, apart from all the ecological damage it entailed.

I was young, idealistic and in awe of the protesters who had put their neck on the line, not just for themselves, but also for the larger good. It was my first exposure to a mass struggle on the ground. Though I joined it only for two weeks, it was hugely inspiring as well as gruelling. We walked about 15km every day, cooked in the open and slept under the sky in freezing December. In the morning, ice sheets would form on our covers but that didn’t dampen anyone’s spirits.

Since then I have been fortunate to have experienced many nonviolent people’s struggles. Not to put down our candle-light marches, but these grassroot protests have a different passion that sustains them for years, despite often seeing no light at the end of the tunnel. Their resolve, resilience and courage are unshakable.

Maybe that’s why when Minnie Vaid, a journalist and documentary filmmaker, asked me to launch her book on the people’s struggle against the Koodankulam Nuclear Power Plant (KKNPP), I didn’t hesitate. While I know the issues involved are complex, these kind of events are often inspirational, and at the very least, educative. Also the title of the book was intriguing—The Ant in the Ear of the Elephant. Minnie shared that this phrase was told to her by one of the women in the movement, who said, they were like little ants, but together have the courage to take on the mighty state, the elephant.

The book highlights the struggle of the project-affected people, who are seldom consulted on monumental decisions affecting their lives. Determined in their mission, here it is the indomitable women who are leading the protest. While a cost/benefit analysis is invariably done on developmental projects, most often the benefit goes to a different set of people than the ones who bear the cost of it. 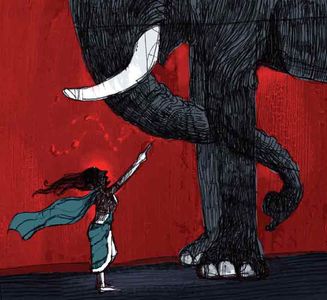 Though in this case they are even ready to forgo the benefits, if any, as they see far more danger associated with it. After the devastating accident at the Fukushima nuclear power plant in Japan in 2011 the protest picked up steam. The people, around KKNPP, just want a dialogue with the management that would answer their questions. Is that asking for too much?

At the book launch Minnie started her talk with “It is the one thousand six hundred and eighty first day of the protest today….” I have always wondered what makes people give up everything for such long drawn battles. Sundari, one of the two feisty women present at the launch, was among the key women arrested and jailed. She said, “Before, all I did was household chores and sometimes watched TV. But today, I have 350 cases against me, of which 24 are for sedition. The more cases they put, the more focused I am in the struggle. This is not just for us but for all those in whose backyards are these dangerous nuclear plants.” She was no more the woman confined to her house.

Milret, the other firebrand speaker, was one of the first ones to protest. She said, “As we are the ones who badly need electricity, my family saw no sense in opposing the plant. But they soon began to understand that it was going to be at the cost of their lives, livelihood and the future generations. Now my husband takes care of our children and I am on the frontline.”

I don’t want to jump the gun with my half-baked knowledge about the technical issues of nuclear safety, but there is no doubt in my mind that it is every person’s right to know and to question what is happening in their backyards. They do deserve an answer.