Some random musings from Paris

This comes to you from Paris, a city I first visited exactly twenty years ago, and several times since. And I thought I was done with the tourist bits. But this time I am seeing everything from the eyes of my six-year-old son, Vihaan. We have been staying at friends’ houses, eating home and café food, visiting museums, boating in river Seine, up the Eiffel Tower, and travelling to countryside in Auvergne seeing castles, village fairs, cows and sheep!

As I type this, Vihaan is playing with his new French friend, without them knowing a word of each other’s language. They are building an architectural wonder with Kapla—a popular European construction game. It’s a box of natural wood planks, the length of a child’s palm and the width of her two fingers. They form infinite shapes, held only by gravity and balance and all one needs is imagination. No screws, grooves or glues! I am so impressed by the simplicity and free flowing form of this game, especially because these days most block games come with images to copy and instructions to follow.

As my head buzzes with random musings, I realise that when travelling outside the country, it is inevitable to compare one’s ideas and values. I remember after the 26/11 attack in Mumbai, there was much talk about the city being resilient. But to be in Paris after the November 2015 attack has pushed my definition of resilience.

I was invited for a meal to La Belle Equipe, one of the six places that the terrorists attacked. The small, charming café saw 19 people killed in a flash. But soon after it got back on its feet, people have been making a conscious choice of going there to stand up to terror and fear with slogans like tous en terrasse—all to the café terrace. Back home, understandably, people would go to the CST train station out of necessity and to Taj or Oberoi hotel for pleasure or work, so maybe the Leopold Café is a better place to compare it with. People initially did go for support and to see the bullet marks that were preserved, but somehow, at this Parisian café, the fervour to not be defeated was still palpable. Resilience is not just bouncing back, but feeling irrepressible. 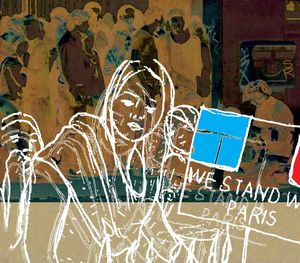 It seems the French have a way of reacting, even to the overflowing garbage bins on the streets. At a time when the city is brimming with tourists and football fans for Euro Cup, the sanitation workers, among many others, are on strike. Despite good reasons to complain about it, I met those who wholeheartedly support the strike. On May 26, hundreds of thousands of workers, students and citizens flooded to Paris, protesting the new reforms in labour laws that allegedly favour employers and not the employees. And since then France has seen nationwide strikes in transportation, aviation, factories and the sanitation sector.

In all this what struck me is that the average Parisian, heavily burdened by taxes, is able to empathise with the workers, even at the cost of being impacted on a daily basis. At least this is what my informal survey showed! Many even joined the protest against the proposed labour reforms that started about three months ago—nuit debout, literally meaning ‘up all night’. A movement led by those who refused to leave the streets of Paris after the demonstration to symbolically occupy public spaces to debate and discuss democracy. This form of protest has spread to dozens of other cities and towns in France and in other parts of Europe. Their dream is to create a more horizontal society instead of the vertical one that we all have learnt to accept.

Today I went to Place de la République, where nuit debout started, and while there were only few that were keeping the spark burning, I felt united with a community that one could call one’s own, beyond nationality and race. In expressing solidarity with the right, the morally right, one’s own moral compass gets strengthened. All this may be one side of the story, but I felt like I learnt something more about a story I want to listen, want to be a part of, want to narrate one day to Vihaan.