The problem with monthly columns is that anything one wants to say about a pressing recent incident has already been said. But this month, even at the cost of being repetitive, I feel it is important to add one’s voice to young India that is showing us the mirror. Just when one was ready to give up on the quality, or the lack of it, of political debates in the age of 24x7 shouting matches on television and even more vitriolic ‘trolling’ on social media, new voices have emerged from places we least expected.

In retrospect, we can see how it started with the Film and Television Institute of India students, who bravely resisted for months the appointment of a person who was unqualified to lead it. It was a blatant undermining of a premier institution. The students finally had to give in, as the pressure on them became unbearable and detrimental to their life and career. But not without generating a very vital national public debate about politicisation of educational institutions.

Then came the unfortunate death of Rohith Vemula whose dying note revealed more about caste oppression than many of the carefully crafted essays and analyses we get to read. It was such a visceral articulation of a quest to transcend the historical wrong but without denying its reality, its ghastly presence in our society.

It is worth repeating what he wrote in his suicide note: ‘The value of a man was reduced to his immediate identity and nearest possibility. To a vote. To a number. To a thing. Never was a man treated as a mind. As a glorious thing made up of stardust. In every field, in studies, in streets, in politics, and in dying and living.” 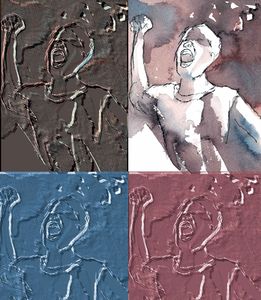 Reading this, we could only imagine his anguish, his poetic aspiration to soar high, the aspiration of a young man who wanted to be a writer like Carl Sagan. How can we not feel ashamed and have a sense of guilt in the choice he made to kill himself? His death created ripples nationwide and made the young generation debate intensely the burden of caste system in modern India, shaking up even the political establishment.

It was Kanhaiya Kumar who then channelled and further amplified the student voices. This time it was about the kind of nationalism we want. He displayed great maturity when he said, 'if there is a disagreement in ideology, don’t reduce it to name-calling. Fight the right battles. Don’t pit a soldier against a student to create a false divide among people.' He challenged those who were reducing nationalism to jingoism. Whether one agrees with him in entirety or not, disillusioned and despondent voices came together, the politics of those in power became clearer and fence-sitters were compelled to finally take sides.

The role of questioning and critiquing is not to be undermined. It is through this that one can change the status quo, be it of an individual, community or a nation. Only when we acknowledge the warts and all, can we do something about it. Denial only perpetuates it. Developing critical thinking is one of the most precious aspects of education and we ought to encourage that among our youth.

So just in the last one year, some of the most contentious issues of our times, like freedom of expression, caste system and nationalism have had an entirely new narrative created by the students. They have put to shame the petty shenanigans of our national political parties. And this undoubtedly is a positive change.

Now it is up to our individual and collective conscience to support these acts of conviction and courage. I am reminded of a TED talk I have seen. In the talk, Sally Kohn said, “We decide what gets attention, based on what we give our attention to, which in turn shapes our culture.”

So a note to myself—drown out the negative with the positive. Support those who put their neck on the line so that we can have a better world.