In pursuit of being good

Since I have dived into my Manto film, wearing the hats of writer, director and producer, my Sundays look like Mondays. However, Sundays remain special, as I make sure I spend more time with my six-year-old. Once, seeing me dote on him as I juggled my time, a friend remarked, “You are such a good mother and so, such a good person.” The ‘so’ seemed so bizarre! I almost retorted, “What kind of a silly statement is that?!” The harshness was impulsive, but the thought, what makes a person ‘good’, lingered on with me.

It is an expression we say and hear all the time and it’s quite likely that we mean different things by it. To a victim of domestic violence, seeing a husband speak ‘normally’ to his wife may make her feel that he is a ‘good person’. To an activist fighting communal ideology, a secular person is good. But not always is a feminist man secular, or vice versa. Is there a more holistic definition of a good person? Or is it simply relative?

Of the many ways in which we look at life, one is—the world outside is a mirror of the world within. We see a reflection of what we want, who we are, and who we would like to be. When we meet someone, it is not that person alone that we see, but our own life experiences influencing our perceptions of who we think they are. Often different people view the same person in different ways. 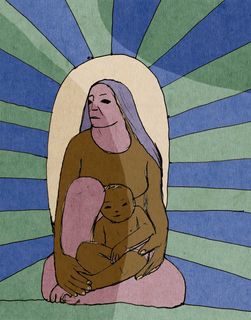 To be good to one’s own is probably the most instinctive trait. But is loving one’s child a good enough criteria to be good? It is because of this assumption that critics of Gandhi are quick to point out that while he was called the ‘father of the nation’ he was not a good enough father to his own child. Not to justify, but his philosophy was vasudhaiva kutumbakam (the world is my family).

The history of humankind has been a slow expansion of the circle of concern—first the immediate kin, then the village, state and country. Slowly it has extended to other countries, other people. An earthquake in one part of the world motivates help from another. Though I wonder if today we are witnessing also the reversal of this process. The refugee crisis in Europe has clearly shown the limits of empathy. The individualistic bubble has increased our ability to shut our eyes to the gross inequality around us. Is it making the definition of goodness shrink?

My son, who hears about God from many of his friends and relatives, is confused. With an agnostic mother, no deities, no prayers at home, he asks, “Is God real?” At times he repeats what he hears, “God is in everything. ‘He’ lives in heaven, up in the sky. Or Ganesh is the best God!” I told him what God meant to me—someone who is always kind, has no anger, is not greedy, does no harm.  God is basically good thoughts and good deeds. To a child, it was easy, “That means if we are really good people, we can be God?” I guess so… at least we could move towards it, I said.

Maybe we need to create a benchmark for goodness, independent of personal relationships. I, like I am sure all of you, have met many ‘good’ people—those who spread happiness, make life worth living, instil faith in humanity, do things selflessly, inspire us to become better human beings. Those who remind us that it is possible to feel love and empathy for a stranger, for those who are not of our blood, nationality, caste, religion or class. It is after all the pursuit of good that is the highest of all pursuits.

People often say, “not everyone can be a Gandhi or a Buddha”. By this are we suggesting that being truly good is unattainable? To quote Nelson Mandela, “It always seems impossible until it’s done.” All I know, it is definitely worth trying!