I recently read a very moving account by someone named Jamie Davenport, who was travelling on a local train to Boston. Next to her were a bunch of noisy teenage black kids, who got pulled up by passengers. They complained and called the police to evict them. There was another black kid, not part of the group, sitting right across from Jamie. He, too, was picked up by the police, clearly because he was black. No amount of telling by the boy that he was not part of the group was heard, until Jamie, the white woman, intervened and told them that the boy was telling the truth.

This incident shook Jamie, who recounts her years growing up white, and like many teenagers, had often pushed the limits of the law on drinking, driving and other transgressions. But she never faced the kind of helplessness that the black teens on the train went through. It changed her perspective on #Black Lives Matter, the hashtag on social media that has gained much attention.

As I read the article, I could see so many in our own country whose lives have ceased to matter. Even more sadly many of them themselves don’t believe their lives matter. I think it has become imperative to state the obvious—all lives matter. We need to remind ourselves that the lives of the poor, the marginalised matter as much as the lives of us privileged. We are often so busy navel gazing, that we can’t even imagine what it must be to be on the other side. After all when a farmer commits suicide, does it change anything for us? When dalit atrocities go unabated, do we even pause for a moment? Is our yesterday any different from today because of innocent lives being crushed in Kashmir? 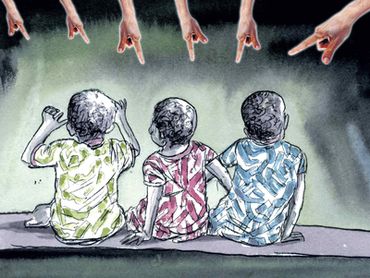 Most lives don’t matter because of simply what they are born into—the caste, the religion, the region, the poverty. They are judged, excluded and disregarded. It reminds me of what my Malayali friend Mercy Mathew once shared with me. A one-woman army, Mercy or Daya bai, as she is known in the villages, has been working for over 30 years from a small village called Harrai in Madhya Pradesh. Over 70 years old, she continues to fight for the rights of people and crusades against many violations of social justice.

Daya bai looks more tribal than those originally from the region. And that often poses an interesting situation for her. When she travels by train, in a reserved compartment, invariably she is asked to vacate the seat by her co-passengers, who assume she does not have a valid ticket. They often abuse or intimidate her and she plays along as an illiterate villager that she is perceived to be, till the ticket checker is brought to throw her out. Then she calmly hands her ticket and gives them a lesson about why they should not judge people by their appearances and treat the poor with contempt. Sometimes she deliberately breaks into fluent English, further baffling them! She doesn’t hesitate to show people a mirror.

By this I am not suggesting that all of us become Daya bai, jumping into activism. But maybe we could just become more mindful about our own role in increasing this gap that makes so many lives matter less and less. It’s not easy to care about others, when we have enough problems of our own. And who doesn’t! But it is this self-focus and apathy that prevent us from being compassionate and sensitive, qualities we want to believe we have.

I feel fatigued when I think of the world we have created. It makes me feel helpless and not so hopeful of any significant change. But then maybe that is just today. Tomorrow I hope to feel more optimistic and less overwhelmed by ‘all lives matter’. And then it might get easier to play my tiny little part in doing what I can do, to make that tiny little difference, to at least one such life, because every life matters.