The Spirit of Jaipur Art Summit 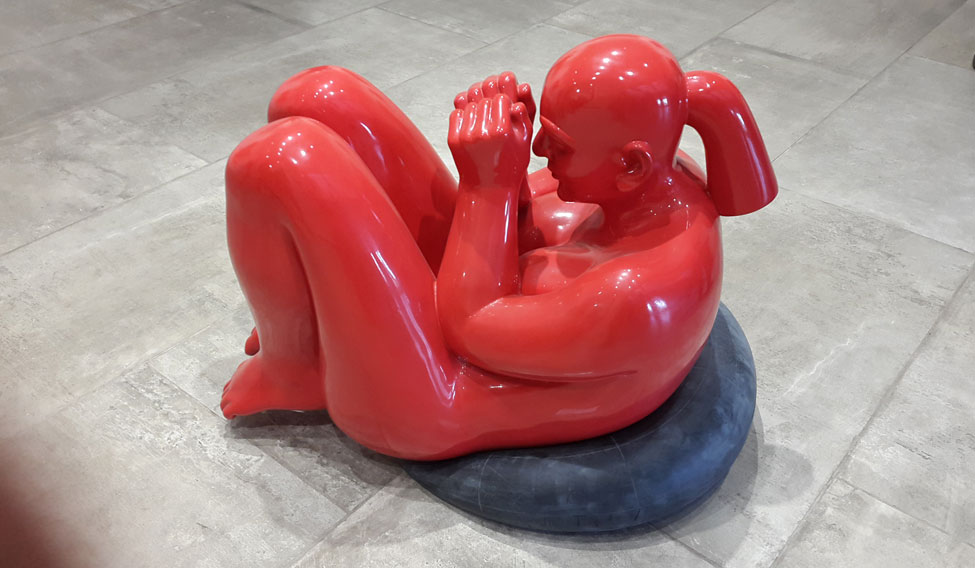 'December 2000' by Navjot Altaf at the Jaipur Art Summit

The spirit of buoyancy was infectious at the Jaipur Art Summit, which celebrated its fourth annual show in December 2017. Art camps, exhibitions, films, workshops, talks, an open forum every afternoon, performances of music, dance, dastan goi et al continued through for five days into the evenings.  Participants and visitors whom we met came from Mumbai, Kolkata, Ahmedabad, Bengaluru, Chennai, Jaipur, Udaipur, Delhi and interiors of Rajasthan and Gujarat. It brought together 87 artists from India of which 48 were from the home state of Rajasthan, and 67 international artists.

The tally is impressive, Shailendra Bhatt and the organisers at the Kala Academy are to be congratulated for the success... All 545 works were exhibited, thankfully at one venue of the Kala Academy. In the basement were the workshops involving young and dynamic artists, with some major works by them displayed. In another corner was the informal seating arranged for open air forums and discussions involving curators, art galleries and the media.

The exhibition curated by Gogi Saroj Pal was impressive in its selection of works by over one hundred artists. That was its strength and its weakness because there were too many images to take in. Centrepiece in the first gallery was a bold image in red fibreglass and duco paint by Navjot Altaf. Larger than life and palpably real, the figure was seated on the ground with hands in prayer and in profile like a Brahman, titled December 2000 (in red) to recall the horror of the Bhiwandi riots. Meri Zamana by senior artist Usha Biswas was startlingly relevant in introducing terrorists brandishing rifles, popular slogans on trucks and popular signs, all this bric-à-brac neatly framed by colourful letters in Devanagari.

The scope of this article does not permit mention of more than a few images that took my fancy. Paintings by Amit Ambalal drew attention with that quixotic humour unique to his work. The woodcut of a woman by Surendranath Nair is dark and brooding, so unlike his archetypal images. Man in Search of Utopia by Rajiv Lochan introduces his revival of the old gelatine print with photographs then painted. A winged and heroic man stands against decaying buildings, isolated in his aspirations.

As against these ‘real’ figures were abstract paintings, specially powerful in the untitled work by Dattatreya Apte and that by Akash Choyal. Encrypted Dialogues by Vimmie Manoj is quite unique in concept, based on Bertrand Russell’s theory that the individual mind encrypts every perception, feeling and conversation experienced. Dreams of Bhupen by Ghulam Mohammed Sheikh is his tribute to the artist Bhupen Khakar, quoting from his eclectic range of themes from the Dying Inayat Khan to the Italian Masaccio’s Adam and Eve. Another series of four dream-like images were showcased, conceived by the American Waswo and painted by miniature artist Rakesh Vijay from Udaipur which has merited an article in this column.

Experiments conducted in the Workshop by young artists were outstanding, exhibited in the basement of the Kala Akademi and outdoors. An installation by Vipasha Sengupta spanned over fourteen feet, the gigantic wings of Garuda  created out of hundreds of rubber gloves for feathers! Equally ambitious was the ladder reaching 25 feet into the open sky, titled Lust for Heaven. Created in collaboration with Nandu Sharma, who works in the remote region of Bhilwara, the stark installation brought us to appreciate both his research as well as the concept already existing in Indian epics of the antihero. We tend to forget that, Ravana was a great scholar and scientist who dreamt of purifying water, of transforming gold to acquire a beautiful perfume, who tried to create a ladder to heaven. His ambitions were thwarted due to the curse by Brahma – that even gods and demons can reach heaven only after death!

The Summit at Jaipur goes to prove that some of the best efforts in art can be viewed now in towns outside the metropolis. One cannot forget to mention that the show was opened by inviting the veteran artist Jogen Chowdhury to the podium to paint, in silence creating images out of his storehouse of the imagination.