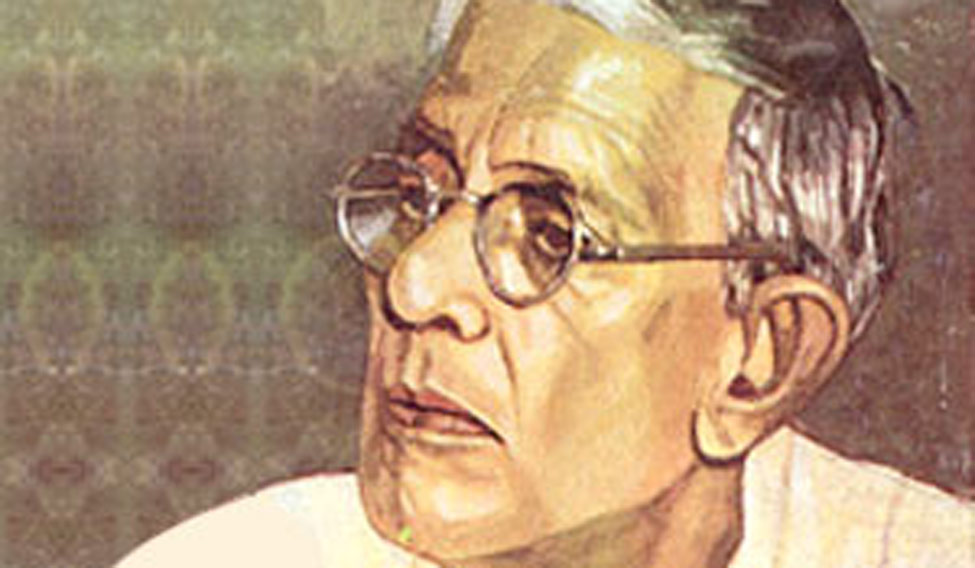 Exhibited at the India International Centre (IIC) at the closing of 2017 are perhaps the finest works of the Bengal masters. Collected in the 1970s and 80s, they are originals from the collection and discerning taste of Sushmita Roy Tandan. Credit is due to Vijay Kowshik as the curator for accessing this private collection from Allahabad, and to Sushmita’s daughters for their cooperation.

Rabindranath Tagore is widely known as lyricist and composer, dramatist and essayist, but paintings by him are not easily accessible although over 6,000 images poured out of his imagination in the last 14 years of his life. Little known is the fact that his paintings and drawings outnumber the songs composed by him. This show presents a portrait of the woman whose poignant face haunted him through his life, whom he painted again and again in different versions. A poem inscribed in Bengali in his own handwriting is addressed to Bankim Chandra, translated into exquisite English.

The strength of this collection and its connoisseurship lies in its drawings, and watercolours in the ‘wash’ technique which became a signature style for the Bengal school. Drawings by Abanindranath Tagore show how he was adept in realistic portraits and small sketches. Quite different in feeling is his Sufi study of Rabindranath Tagore, himself playing the role of the blind mendicant in a play. Then there is his ‘dark’ painting of night with a sultry beauty, suffused with mystery. But Abani’s virtuosity is best seen in a rare book of delicate woodcuts, with letters of the Bengali alphabet animated through the forms of parrots, doves, turtles, rams, goats, elephants and all manner of whimsy.

His brother Gagendranath was celebrated for his bold depictions of the Burra Sahibs in a ‘Western’ style akin to Edward Beardsly, depicted in this show with Clash of Civilisation (his title long before it became infamous from Huntingdon’s book). His depiction of trees swaying wildly in a storm and a breathtaking sweep of the Himalayas come as a surprise, relying again on the wash technique. Nandalal Bose’s study of the clichéd theme of Baul singing surprises us with its emotive rhythms where the Baul is tuned into his instrument of the ektara, united in body and soul.

I have chosen to single out works in the wash technique. Although the Bengal masters were targeted for their ‘wishy washy’ treatment, it was indeed this technique which added emotive feeling or bhava. There are also influences from Japanese art, as seen in the tremendous power of Nandalal’s small pencil sketch of Ram and Laxman killing a demoness, again in Binode Bihari Mukherjee's delicacy of a Flower Study or the burst of a Tree and Foliage by Ramkinkar Baij. If Baij’s work could be boldly expressionist, we can turn to Jamini Roy’s early landscapes to find touches of impressionism in the glimmerings of light and dark of the harbour at sunset.

The balance of Jamini Roy’s follow the Kalighat style. A sizeable collection of Kalighat popular paintings lead us to appreciate another source of influence on these artists from Bengal. Familiar Kalighat scenes are of the wife recoiling at the feet of her husband, the wife beating her husband with a jharoo, the mahant watering plants as punishment for his illicit love affair. But the babu seated on a chair with the ear cleaner bears resemble Ganesha sitting likewise, as a Bengal Dandy wearing a dhoti with fancy pleats, pointed shoes and lascivious eyes.

The initiative taken to open this collection to the public is hopefully a new direction for the IIC. A private collection as this reflects individual taste and sensibility. That Sushmita Tandan was a singer is seen in her selection seeking out musical themes and rhythmic forms. It also focuses on unusual themes or the unexpected, as in the scenes described above.