Revisiting the past through post-independence 'modern' architecture

How many of us realise that several institutions of the government were launched in Delhi in the two decades after Independence? The buildings were conceived along with these institutes, aspiring to that spirit of modernism ushered in with Independence. They were designed by just a handful of architects.

The exhibition curated by Ram Rahman at the Kiran Nadar Museum brings our attention to this enterprise that pioneered a new vision. Architecture was being taught only at Sir J.J. School of Arts in Bombay, the Delhi Polytechnic and the College of Fine Arts in Hyderabad. Not surprisingly, several architects received their training abroad, inspired by American, German and French ideas of the modern. Achyut Kanvinde and Habib Rahman were trained at Harvard and MIT, influenced by ideas of the architect Walter Gropius who brought with him concepts from the Bauhaus movement in Germany. A generation later Charles Correa was trained also at MIT and Piloo Mody in the US, and Raj Rewal in Paris —each of them contributed to the new aesthetics.

Concepts of the ‘Modern’ relied on building materials of concrete, steel and glass, not the stone and marble that built imperial New Delhi in the early twentieth century. They relied on affordable materials, designs that were practical and functional, styles of simplicity with clean lines. It was some time later that our architects discovered the use of indigenous materials such as brick and mud, tile and terracotta.

An aerial view of Delhi in the 1950s shows Rashtrapati Bhavan and the Houses of Parliament surrounded by empty pockets of land near India Gate. Some institutions built in the 1960s include IIT Delhi in 1963 designed by J.K. Chowdhury, the IICR (Indian Council for Cultural Relations) by Kanvinde, the Controller and Auditor General Building, and the CSIR (Centre for Sciences) by Rahman. All these and many more institutions were put in place within one decade. 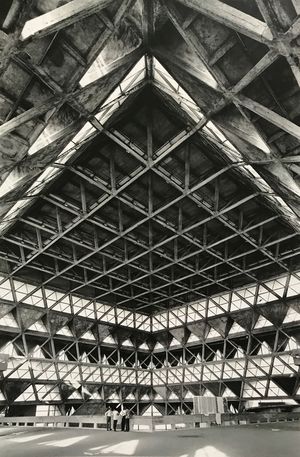 Interior of the Hall of Nations, 1972 | Photo Madan Mahatta

In 1949, Habib Rahman had designed the Gandhi Ghat in Calcutta, which was built in the new language of concrete. Jawaharlal Nehru invited him to Delhi, where he began his long career in government with the Public Works Department. He worked with both Humayun Kabir and Maulana Azad, and when Maulana died in 1957, Rehman was asked to build his mazhar. He created a superb design as a tribute that befitted him—an elegant arch that replicates in precise form and shape the towering arch of the Juma Masjid (in the vicinity), but built in a thin white shell of concrete.

Nehru’s personal interest and interaction with architects and artists is worth recording, and is seen in a photograph. His reaction is indignant anger as he frowns at an original model in the company of architects. He asked Rahman to redesign the Rabindra Bhavan “in the spirit of Gurudev”. The resulting plan was influenced by the original concept for Santiniketan with more open-air, and a corridor of arches connecting the galleries with a separate block for offices of the three academies of arts, literature and performances. It is fascinating to find that in this same year of 1961 the India International Centre was being conceived by Joseph Allen Stein, and both institutions were built with almost identical ground plans. Quite clearly, there was dialogue and interaction between the two architects, leading to the building of these two very different cultural institutions.

One of the institutional complexes to be established in the 1970s were the trade fair grounds near the Purana Qila, with the Hall of Nations planned for international exhibitions. Raj Rewal’s ambitious design of steel, concrete and glass set up a huge hall that could only be rivalled, in my opinion, by the 19th century huge fair in Paris. This gigantic enterprise of fantasy with an intricate web of steel and glass was most brilliantly constructed by Mahendra Raj. For decades, the Hall of Nations served as the venue for exhibitions and annual book fairs. This year, despite efforts to save it, the Hall of Nations was destroyed. So also, the magical fantasy of Sheila Cinema Hall near Connaught Circus (Rahman’s only extravaganza in colour), has sadly gone.

Superb pictures in black and white taken by Madan Mahatta testify his untiring efforts to present the urbanscape of Delhi. The remaining photos were taken by Habib Rahman who nurtured a passion for photography, and these include a dramatic shot of Joseph Stein walking up the stairs of the Ford Foundation. Homage is also paid in the show to Mahendra Raj who engineered the buildings by most Delhi architects in the 1960s and 70s. His extraordinary drawings in the show, detail some of the daring feats of construction in the language of the modern.