Of the fantastic and real 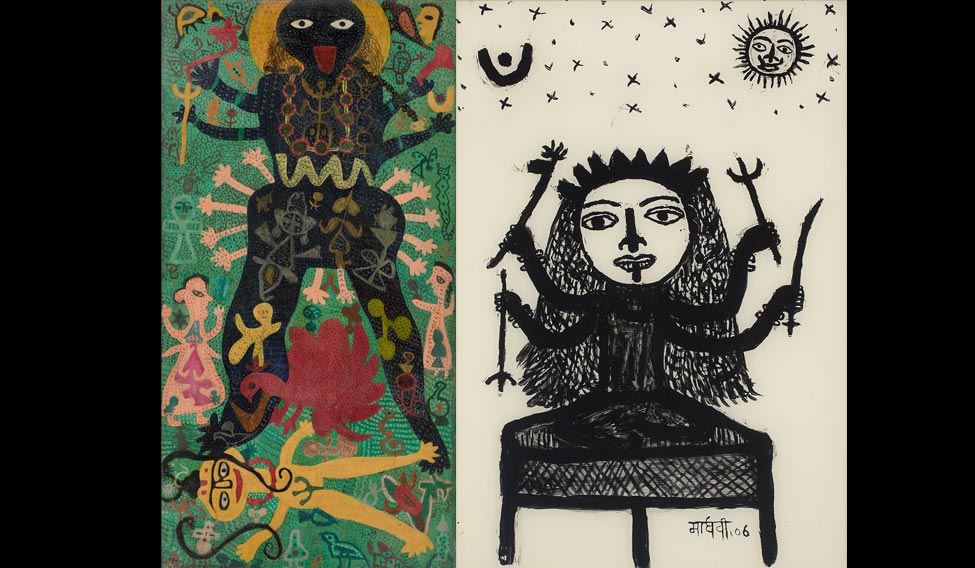 Madhvi Parekh’s paintings defy definition by not falling into any convenient category. They are not ‘naïve’, they are neither folk nor urban; instead they employ different narratives to infuse her work with fresh vitality. The fact that she was reared in a village in Gujarat brings an exuberance and rawness spilling out of her canvases.

She began to draw tentatively in the 1960s, in pencil and ink and in black and white, while living her early years of marriage in the most turbulent years in Calcutta. She was encouraged by her husband and artist Manu Parekh, who gifted her the book of Paul Klee’s Pedagogical  Sketchbook. Klee’s drawings were her point of departure, inspiring her to appreciate the significance of the dot and line, the square, circle and triangle. She added to this her own inner world of fantasy—it was like opening Pandora’s box, out of which tumbled cats, dogs, snakes, scorpions, stars, anthropomorphic shapes, flying fish, plants, eyes, noses, human hybrids and creatures of fantasy.

In the 1970s, they are creatures ballooning out of a vivid imagination and an acute observation of the world of nature. Within each form are others swimming around—dottings on a landscape which seethes with animate forms. To me the distinction between male and female seems blurred, as is the difference between man and animal. The colours she uses in these images have no cognizant relation to reality but are instead a joyous revelation of the colours of life itself.

The ‘unlearning’ of the principles of art becomes important here. That she was self taught has been used to her advantage. Forms and colours do not necessarily relate to ‘reality’. Nor does space have to recede with an understanding of perspective, nor is the difference to be defined between the earth and sky. Nor do figures have to be scaled in proportion to each other. Everything can be reversed or inversed with one purpose: to bring alive the essential reality of being alive.

Madhvi is quoted to say she can begin to draw from any corner of the image. This is akin to women embroidering a piece of cloth, but it is unlike the manner in which most artists would compose a painting. Another aspect akin to the embroiderer’s art is that every inch of the composition and anthropomorphic figures must be filled in with forms. Described in art language as ‘horror vacuii’ this is a skilled craft used to create images of wonder in calligraphy and paintings.

Two marked areas where Madhvi has made references and sourced her inspiration need to be given attention. Here she demonstrates a determination and boldness which is belied by her seemingly serene and calm disposition. These paintings suggest, however, that beneath the surface there lies a seething complexity and intensity to her vision. This of course is why her work does not fall into the category of being described as primitive or naïve.

The first of these influences derives from the Madhvi and Manu’s visit to Russia, where she was captivated by the spell of Christian icons. The life of Christ in its martyrdom made a profound impact on her, to create narratives of the Last Supper, the Crucifixion and the Pieta. At the time she was working in the complex technique of what is called ‘reverse painting on glass’. This is a medium appropriate to creating icons shining like mosaics and stained glass windows in cathedrals. Her Last Supper is a six foot canvas, a momentous event of the disciples gathered around the still centre of Christ. Bright colours and animate patterns on clothes add a rawness to these icons!

The influence of the Village Deity is predictable but Madhvi’s images of  Durga and Kali are overpowering. Her use of elemental colours black and red suggest the combat of the demoniac and the divine forces, and at times just black ink for Kali summons the power of the goddess dancing on Shiva, empowered with ten arms and talismanic signs. These icons are mesmerising, a fit tribute to Devi in the week that concludes with Durga Puja.