History gets a new home

When I think about Bihar—other than its incredible history, rich culture and an ancient university—I immediately remember three friends: Writer N.S. Madhavan, who served as a bureaucrat in Patna; Manoj Nair, who was born and brought up there; and, of course, the proud Bihari artist, Subodh Gupta.

Bihar has a long history. It was the seat of many ancient kingdoms. The confederacy of Vrijji, which falls in modern-day Bihar, formed the first republican state known in history. It was in Magadha, in the 6th century BC, that Buddha developed his religion. The name Bihar, in fact, comes from the Sanskrit word vihara, which means a Buddhist monastery. Mahavira, who promulgated Jainism, was born in Vaishali. Pataliputra was one of the greatest cities in the ancient world, ruled by kings Ajatashatru, Chandragupta Maurya and Ashoka. It was also in Bihar that Mahatma Gandhi introduced the concept of satyagraha, when he used it against the British indigo planters in Champaran.

Patna is home to India’s third oldest museum—the Patna Museum. Now the city gets its third museum, the newly constructed Bihar Museum. The Patna Museum has thousands of prehistoric antiquities and artifacts from the state and nearby areas. So does the private Jalan Museum. But when Nitish Kumar, the chief minister of Bihar, visited the Patna Museum in 2010, he discovered to his chagrin that the exhibited art was less than 20 per cent of the museum’s collection.

Thus germinated the idea of creating a new museum, something similar to the Louvre in Paris. With that vision, the state-of-the-art Bihar Museum was built on Bailey Road in the state capital. Designed by Japanese architectural firm Maki and Associates, with assistance from Mumbai’s Opolis Architects, the Rs 517-crore museum is contemporary in sight and ambitious in prospect.

The design includes four core exhibition galleries and a permanent gallery. The 13.5-acre campus is based on the concept of ‘museum and the market place’. Some of the attractions include the 2,300-year-old Didarganj Yakshi—one of the most iconic sculptures in India, the Lohanipur Tirthankara—a surviving example of Jain art, the Mauryan lion head, Buddhist bronzes from Nalanda, terracottas from Bodh Gaya, and more. The main theme of the museum is the history of Bihar and its contribution to Indian civilisation. The museum has the space to display around 40,000 artifacts not in display at the old Patna Museum, which can only display about 2,000 artifacts. 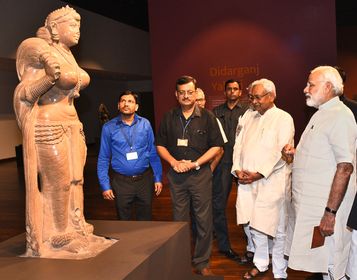 The museum was opened on Gandhi Jayanti this year. I was lucky to be part of a delegation of artists invited for the inauguration. It is a connection that began in 2016 during the third edition of Kochi-Muziris Biennale, when V. Venu, Kerala’s tourism secretary, called Riyas Komu and me to meet Anjani Kumar Singh, chief secretary of Bihar, his colleagues and Sabyasachi Mukherjee, the director general of Chhatrapati Shivaji Maharaj Vastu Sangrahalaya, Mumbai. Apart from seeing the biennale, the purpose of their visit was to scout for a director for the Bihar Museum. We had a long discussion on the other aspects of the museum.

The museum is conceived as an autonomous institution with a corpus fund. But that is not enough. I saw serious anomalies in displays wherever there was an introduction of temporary exhibits. This can be addressed only by curatorial expertise. A museum also needs experts from the fields of museology, technology and a programme director.

That apart, it didn’t take long for us to realise that the talks at Kochi had borne fruit as our able guide, an archeologist, took us—C.S. Venkiteshwaran, Riyas and me—around the museum. The remains of Pataliputra have been preserved for posterity.