By the banks of Bosporus

Istanbul is a unique city in the sense that it faces both the east and the west. It was formerly the capital of the Byzantine Empire, the Ottoman Empire, and—until 1923—the Turkish Republic. The old-walled city of Istanbul stands on a triangular peninsula between Europe and Asia. Even today when one visits, it appears as a bridge and as a barrier that has withstood contradictory influences of religion, culture, and imperial power.

The old city was about 23sqkm, but the present city boundaries stretch beyond. The original peninsular city has seven hills, requisite for Constantine’s “New Rome”. Six are crests of a long ridge above the Golden Horn; the other is a solitary eminence in the southwest corner. The waters washing the peninsula are called “the three seas”—the Golden Horn, the Bosporus, and the Sea of Marmara. The Black Sea waters thrust southward through the Bosporus, but beneath them the salty warm waters of the Mediterranean push northward as a powerful undercurrent running through the same channel.

It is in this backdrop of nature and history that the current Istanbul Biennale is held, trying to confront the questions being raised in the neighbourhood of Turkey—in fact, all around Turkey. It is also one of the cities that has welcomed to its fold the new trend of artist-curated shows. It has joined the likes of Manifesta, Berlin Biennale, Shanghai Biennial, Lahore Biennale and, of course, our own Kochi-Muziris Biennale. Back in India we could return to the early 1980s when Vivan Sundaram curated a show, ‘Seven Young Sculptors’, organised by the Kasauli Art Centre.

I was in Istanbul last week to witness the Istanbul Biennale. Titled ‘A Good Neighbour’, the 15th edition of the biennale is curated by Danish-Norwegian artist duo Michael Elmgreen and Ingar Dragset. It showcases 30 years of art extravaganza in six different venues with 56 participating artists from 32 countries. Significant is the fact that it includes 10 Turkish artists, considering that the country’s government is constantly questioning their participation in such events and is cracking down on any opposition in the country. Yet, this perhaps is the most important political moment in Turkish art since the Gezi protests of 2013.

The artists-curators write: “When we begin to think about neighbourhood, a network of relationships is revealed like the rings of an invisible chain spreading rapidly from private to public and from there to the whole life.”

Existing on the fringes of Asia and harbouring an unbridled romance with Europe, Istanbul has always faced a political question mark. Now more than ever before. So it is pertinent that we are posed the question of whether we are looking at a good neighbour within Turkey itself or a good neighbour in everyone and everywhere. People of Turkey seem as if they are living together but floating in between extremities. 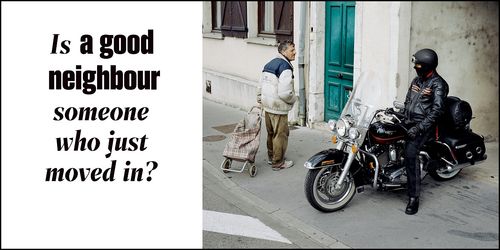 Building bridges: A poster of the Istanbul Biennale.

I personally celebrated my time in Istanbul though suspicious eyes were probing everywhere. There is a palpable presence of pain and discomfort and a complete absence of trust. In fact, people are looking for friends and neighbours within themselves. The title is, without doubt, evocative though you could sense an incidence of ambiguity. Is the biennale asking whether Turkey is a good neighbour? However, the biennale smacks of optimism and once again raises the possibility that art can be a bridge, socially and artistically, and one leaves with one of the Biblical commandments: Love Thy Neighbour.