It is strange how our relationship with a place grows with time, even if we only visit the place when a special event warrants it. Lyon in France is one such place where an important biennale beckons me every two years. The city’s artistic moorings are evident on landing at the Lyon–Saint Exupéry Airport, named after writer Antoine de Saint Exupéry. The train station from the airport to the rest of the region, Gare de Lyon-Saint Exupéry, designed by Spanish architect Santiago Calatrava is a sculptural marvel. Its fan-shaped canopy looks almost as if it has been injected with life.

I first met MAC’s director Thierry Raspail when Gunnar Kavaran, Hans Ulrich Obrist and Julia Payton Jones were putting together a travelling show titled The Indian Highway, and I was showing my first video installation called Ghost Transmemoir at the museum. When we were thinking about the first edition of the Kochi-Muziris Biennale, one of people I had called up for advice was Thierry. He showed us how to organise a biennale, what to do and when, and, most importantly, whom to meet from around the world.

This edition of the Lyon Biennale has chosen Floating Worlds as its theme, apt for the fluid modernity of the city. A couple of weeks ago, I attended the professional preview of the biennale, curated by Emma Lavigne. The cluster of exhibitions unfurled like a journey around an archipelago. This is the second of three editions of the biennale interrogating the concept of ‘modernity’, as defined by poet Charles Baudelaire: “Modernity is the transient, the fleeting, the contingent; it is one half of art, the other being the eternal and the immovable.”

As part of the 40th anniversary celebration of the Centre Pompidou in Paris, a number of masterpieces were brought to Lyon for the biennale. More than 60 artists from 23 nations displayed their works across two major venues: the La Sucrière and the MAC Lyon. The 2017 Biennale also involved three platforms: Veduta, Rendez-vous and Resonance. 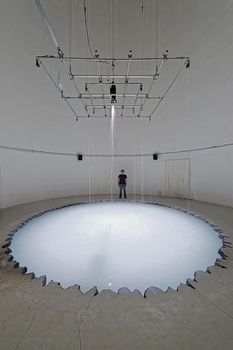 This biennale, perhaps because of its throwback to modernity, was overtly Eurocentric. A great experience of performative works, return to historical art pieces like that of Lucio Fontana, Lars Fredrikson, Marcel Duchamp, Bruce Conner and Philip Corner among others and its contemporary comparisons and reflections; sounds, technologies, kinetic, minimalistic, sculptural and monumental works—all of them complemented each other to create a museo-curatorial biennale! Some incredible works by Doug Aitken, the late Richard Buckminster Fuller, Alexander Calder, Céleste Boursier-Mougenot and Ernesto Neto were on show.

I always make it a point to visit Rendez-vous. Once Thierry had asked me to nominate an artist’s name for the Rendez-vous. Usually ten young artists from around the world are nominated by ten biennale curators, along with an equal number of French artists. This edition featured two of my artists, Dia Mehta who was nominated by the curator of the third edition of the Kochi-Muziris Biennale, Sudarshan Shetty, and Hicham Berrada. Both of them were invited artists at the first Yinchuan Biennale that I curated in 2016. Lyon was a kaleidoscopic experience as it reminded one of what Rainer Maria Rilke had written: “It is strange indeed to see how everything that was firmly tied down, is now floating freely this way and that, unfettered in space.”