An art fair is usually a commercial exhibition of works of art and has been a crucial part of the art market in Europe since the eighteenth century. Famously, the Paris Salon, which opened to the public in 1737, and the Royal Academy in London, which opened in 1769, both became the barometer to the success of an artist.

As art historians have suggested, these exhibitions assisted in establishing the artist’s reputation and helped to quickly determine the value, or selling price, of his or her art. Other institutions developed their own prestigious venues to promote artists, including the creation of the world’s first biennale, the Venice Biennale in 1895, which was initially conceived as a commercial art fair.

Fairs were arbiters of taste and were expected to maintain a perceived level of integrity in the type of art being produced. These art fairs were largely juried and the jurors were very stringent as to what was acceptable and what was not, causing many a disagreement between artists and these institutions.

History tells us that art critics at the end of the nineteenth century and the beginning of the twentieth century, challenged the existing ‘art fairs’ for their rigid, out-of-date view of art which resulted in many contemporary artists of the time being rejected. The artists and critics reacted with an art fair of their own, the Salon des Refusés—the exhibition of rejects.

Distinctive to art fairs, an exhibition in any public or commercial gallery is a carefully curated display of works that support a specific theme in the hope to attract the interest of the public. 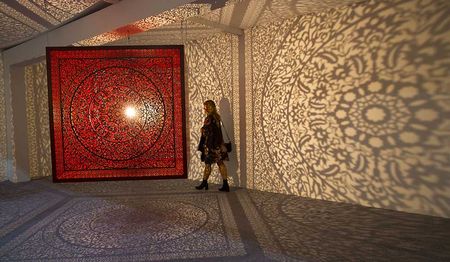 Mesmerised: A visitor at the India Art Fair in New Delhi | AP

The defining point that distinguishes between art fair and art exhibit is the manner in which money transactions occur. Today, if non-profit concerns such as museums, biennales, triennials and other perennial exhibitions promote cutting edge contemporary art and theory, it is the art fairs that encourage the commercialisation of art and harness the power of art and business.

The aim of art fairs has always been to connect the world’s premier galleries and their patrons, as well as serving as a meeting point for the local and international art world. Today, dozens of international and regional fairs exist and proliferate. Perhaps the world’s most prestigious and best-known art fair, Art Basel has been in existence for more than 45 years. Notable global forays and franchises include Art Basel Miami Beach, Art Basel Hong Kong, ArCO Madrid (I was invited to be the guest curator of India Pavilion in 2009), Frieze Art Fair in London and New York, FIAC in Paris, Artissima in Turin, The Armoury Show, New York. Closer to home, Art Stage Singapore and the first edition of Art Stage Jakarta opened last year as well as the India Art Fair in Delhi.

These fairs all aim to attract the top galleries and artists to exhibit and rent spaces, all in order to attract collectors, curators, institutions and museum experts to help build markets and the careers of artists.

Today, art fairs behave like mini institutions in their own right, with very well conceptualised talks, ambitiously installed exhibition stalls and high concept cafés and restaurants. The democratising nature of art fairs has led to the popularisation of contemporary visual art in society. At the eighth edition of the India Art Fair, which was open from February 2 to 5 in New Delhi, both seasoned art lovers and new audiences got to see and experience the most cutting edge practices in India alongside tried and tested old masters and moderns.

To quote my friend, the eminent curator and theorist, Hans-Ulrich Obrist, “I think the art fair is very much a form of urbanism. I think something really happens to the cities when such a fair happens. The city becomes an exhibition; it’s amazing.”