I am agnostic and entirely non-religious; I do not self-identify with any religion and leave the required column blank in application forms. I suppose you could call me—as my beloved Twitter trolls will—(that dreaded word) a liberal, deracinated by her own lack of cultural roots. I concede that my secularism has suffered from a lack of mooring in faith. So I am not best qualified to see life through the prism of any religious identity. Yet, for the last week, a question has been gnawing at me, nibbling away, bit by bit, at my conscience and sense of comfort: what if I were Muslim?

What would I feel to discover that my voice is now barely audible in the country’s political discourse because I am no longer needed to win elections? Or, that in the most populous state of India, not a single candidate of the party that stormed home with a mammoth majority was Muslim? Would I be able to celebrate Eid after seeing the photograph of Junaid’s blood-spattered body lying lifeless on a railway platform in north India? A teenager, Junaid was coarsely taunted for his religion in a squabble that started over an elusive seat on a crowded train, but eventually became only about Being Muslim. What would I tell myself after seeing the cattle trader, Pehlu Khan, flung to the side of a pavement by a murderous mob, his tear-stained face crying out for help that never came? Would I be able to share the optimism of Mohammed Sartaj, a proud corporal in the Air Force, who told me, “Saare Jahan se Accha Hindustan Hamara,” his belief in justice intact even after his father, Akhlaq, was murdered over beef rumours, and the body of a man accused of killing him was draped in the national flag, with a senior minister present at the village? What sense would I make of this new lexicon where words like ‘vigilantes’ and ‘lynching’ are casual normalisations of collective bigotry?

If I were Muslim, how much helpless rage might I feel about radical Islamists and terrorists who soil the name of my faith and then leave me to carry the cross of condemning them, like I am somehow responsible for their monstrous acts? What would I say to the family of Ayub Pandith, a brave Kashmiri police officer, beaten to death outside a mosque on the holiest night of Shab-e-Qadr? Or, to the family of strappingly handsome Umar Fayaz, a young soldier, killed while home for a family wedding? How would I deal with the self-appointed custodians of my religion—the orthodoxy that defends retrograde practices like triple talaq—only to embarrass me and strengthen the bigots who attack my community? 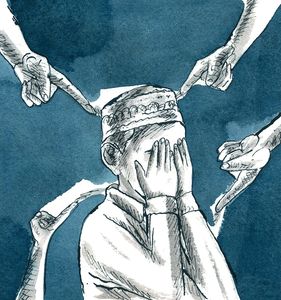 If I were Muslim, what might I feel as a citizen to learn that no Central minister attended an iftar evening hosted by India’s President? I would remind myself that even heroes of my community, President Abdul Kalam among them, said no to the wastefulness of iftar parties, donating money to orphanages instead. And, I would tell myself that my identity need not be reduced to such tokenism. But a small part of me would wonder if the same (welcome) political separation between religion and state would apply to all other festivals, too, like Diwali, Christmas and Holi.

If I were Muslim, I would look back in dismay at parties that claimed to speak for me but manipulated me and then abandoned me. I would think of Shah Bano, who went to court for the right to alimony, only to have the decision reversed by the Rajiv Gandhi government, in what would be the first, but not the only, instance of ‘secular’ malpractice. And I would think: are these my only options—a party that pushes me to the margins of irrelevance and a party that uses me?

If I were Muslim, I would remind myself of all the million reasons I love my country. But, just like every time they told me that I as a ‘moderate’ must speak up, I would ask, will the moderate Hindus—the vast majority of India—speak up for me?