There has been much positivity around the ongoing FIFA Under-17 World Cup. It is great to see Indian football getting this kind of attention, and I can imagine the pride our players felt when they were cheered by the crowds despite the final scorelines. Our performance was to be expected. I watched a bit of this World Cup, and was happy to see the involvement of the prime minister in the event. If the head of state takes an interest in sport, it can help provide the much-needed impetus.

Growing up as an athlete in Bangalore in the 1970s and 1980s, I was aware of the great footballing rivalry in the city between its strongest clubs, Hindustan Aeronautics Limited and Indian Telephone Industries. While training, I could see the footballers practise and recognised many of them. The stadium would be packed for matches and football created a great vibe in the city. That is now returning after a dry spell in the past few decades. Of course, I was disappointed that we did not feature as one of the venues for the World Cup.

Staging a big global event in our country can work both ways—the Asian Games in 1982 led to much in terms of infrastructure and the creation of the Sports Authority of India besides having a positive rub-off on other sports. India’s organisational capacity to host a global event was noticed. But while there were many positives from the 2010 Commonwealth Games, financial scams and organisational bungling hurt India’s overall image as a country capable of hosting world-class events.

We have a terrific opportunity post the U-17 World Cup to take the right steps in developing football. We need to have a clear plan on how we will leverage traditionally strong areas of football—the northeast, Bengal, Kerala and Goa—and at the same time get other interested states to develop the sport at the grassroots. A lot will depend on the All India Football Federation’s ability to attract investment into the game and provide strong and clean governance.

Much of the money coming into sports like football and kabaddi is coming in through private initiatives and top-quality television coverage. How much our sporting bureaucracy and government will be open to change and partnering with such initiatives will determine the success of future endeavours. 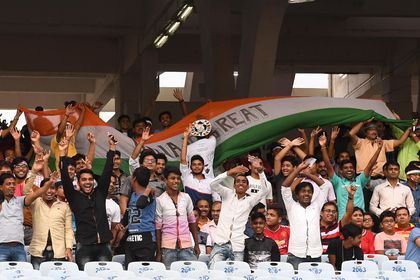 FIFA sees India as its next big market. It would want to integrate us into the global game where our large and increasingly affluent consumers integrate into the world of the various leagues in Europe. Economically, it is a huge opportunity. But this cannot happen if there is no development of local talent capable of playing in any league in the world. So, the ball is firmly in the AIFF’s court. They need to be proactive and use FIFA to help give football a big thrust in terms of investments in infrastructure and capacity building through programmes that are in tune with global standards. The challenge that the AIFF faces is infinitely more complex than what BCCI did in developing cricket. Cricket is played by just a few nations while football is truly the most widely played sport across the world. Even developing nations like Thailand, and under-developed African countries have built a strong football culture. Competition is high and the stakes, unimaginable.

I strongly believe that our sports ministry needs to play a visionary role along with the AIFF in sparking a revolution that can put us firmly on the world footballing map.